The Sound of Shadow: Inverted Shadow by Eelco Wagenaar

The Sound of Shadow is an exhibition of works by a mix of graduating and graduated artists, some coming from the Gerrit Rietveld Academy, that takes place in Amsterdam (Westergasfabriek) in the month of May 2010. The works aim to reflect on the relation between sound and (moving) image, and they do so by using image instead of sound. The structure of the exhibition is essential to the goal of the works, for it combines different screens that together compose a symikony (a visual symphony). The installation is time based and follows the rhythm of a symphony by reproducing different videos at different speeds and by varying their respective positions on the screens. The installation fills the entire space and the viewer can either look at the symikony from the outside or walk through the screen and so gain different perspectives and discover disparate associations between the images that are projected.

In the same space as the symikony, the visitors encounter Eelco Wagenaar’s installation Inverted Shadow. Inverted Shadow projects the images of objects and persons that are in front of the installation as white shadows on a black screen. The screen and the projection are much larger than the size of a body and are placed at the entrance/ exit of the exhibit. When the visitors leave the space, they cannot avoid looking at the big projection, because they have to walk around it to reach the exit door. In front of the screen (a large sheet), a small paper cactus is placed on the bottom and it shows what the installation does. Otherwise it would be less clear for the passer-by that his own shadow will appear on the screen, especially because of the irregular lag in the rendering of the image. 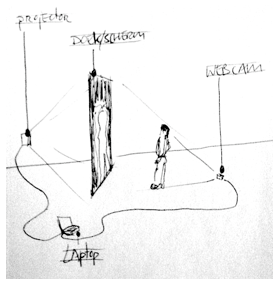 Sketch of the functioning of Inverted Shadow by Eelco Wagenaar

In my opinion, Inverted Shadow is the only work of the exhibition that directly engages with the body of the viewers, it also forces the passer-by to look at it by the location where it has been placed. As a matter of fact, the installation enlarges and exaggerates the body by its size, and at the same time it hides and minimizes it by its lack of speed and the impoverished image that is rendered. So, the body on the screen is a slow white shadow, with no colors and no details, and no real time response to the viewer’s movement. This combination of exaggerated size and impoverished image engages the viewer in extreme aware gestures, while he is looking for himself (or his inverted shadow) on the bigger screen.

In this installation there is only visual feedback, a choice that is in line with the research topic of this project. While the symikony wants to create sound without using sound, experimenting with moving images and how we perceive them in absence of sound, Wagenaar’s work seems to reflect on space “outside the screen”, real space where we act and where we see, or don’t see our and others’ body. If the symikony addresses the artists, makers and audiences of audio-visual products, Inverted Shadows seems to approach a larger group, that is everyone that moves and acts in space.

Movement is clearly essential for this installation to work. The viewer discovers himself by moving in the space in front of the sheet and by establishing a relation with his body and between his body and its inverted shadow on the projection. It is by moving, and observing the feedback on the image that one identifies himself in the space and detects other people’s presence. One of a sudden, all objects and bodies that are present in the space become necessary for the viewer’s orientetation, and therefore important. This is probably the reason why this piece engages much more with our bodies than the symikony does. In the symikony we observe moving images dialoging with each other, creating a rhythm. It also relates to our body because of its size and it certainly relates to space, by illuminating it (the space is completely dark, except for the projectors), by filling it (the screen hang and create almost an architectural structure), by opening paths in space that the viewers can walk. Nevertheless, Inverted Shadow reflects on our moving bodies in space, instead of on their mediated images. The experience then becomes more real because it is an extension of our direct experience of space, like an external eye that we can appropriate to observe ourselves in space. Of course the image is not a realistic representation, like a camera image would be. But probably just because we are accustomed to a color, real-time image of ourselves, such saturated image does not make us more aware of our movement, it abstracts it from reality instead. On the contrary, the Inverted Shadow works like a medical screen of our movements, or like a heat map. It gives us back a study of our movement, and by doing so it makes us extremely aware of its existence for a while.

Interview with the artist Eelco Wagenaar

At the exhibition The Sound Of Shadow, your piece was the only one that explicitly engaged with the audience’s body and displacement in space. How would you relate your piece to the ‘symikony’ produced by the video installation?

Yesterday I also talked about that, and I might have contributed even more when my Inverted Shadow installation would have been mixed up with the other screens. But in our try out, where a lot of people also interacted with my installation it became a bit ‘noisy’ to the other screens (which where then just smaller screens, except mine).

How it worked now (and that is what our intention was to put it in this situation), was when at the end a viewer of the composition left he/she would be have a kind of ‘aftershock’ by being confronted with him-/ herself. So it emphasizes more the contradiction between going around the screens and immerse into the video-projections, and experiencing the physicality of their own body (which is being stretched, because of the oscillating time delay…). So maybe we can say that the inverted shadow installation is a counter piece towards the video installation.

How do you, as an artist, research the relations between sound and visual inputs and their relation to our perception of movement?

An important aspect of your installation Inverted Shadow is, I think, the lag between the movement of the viewer’s body and the inverted shadow that appears on the projection. Can you talk about the choice for inserting a lag in the installation and the reason for it? Is delay/ real-time response a topic that you try to research with your work? If so, in what ways?

The lag adds an extra dimension; it puts the ‘user’ on the wrong leg (well this is a Dutch saying directly translated to English…). The user is looking at himself but it takes some time to realize (there is some kind of connection to Dan Graham’s ‘Time Delay Room‘). The time lag is in fact oscillating. So sometimes there is no delay and sometimes there is. This makes the ‘shadow’ jumpy and also able to catch up with the ‘real’ time. So it stretches the perception of the relation we have with our own body. The white shape on the screen behaves like a shadow (but it is only a simulated shadow!!). We kind of accept it as a shadow, whilst it has a contradicting color and it doesn’t really behave like a shadow (well, like a lazy shadow ;-) ). But like you said, it is quite an important aspect in this work. In a previous work, the cube I showed at Rietveld (Unfold), I tried to make the delay in the projections as small as possible (only milliseconds, so it was almost like real time). But as I tried to explain in the previous question, I would say perception of space is influenced by time. So by using the delay in this installation, this perception is being manipulated.

So, if I understand well, in Inverted Shadow you mainly played with lag and inverted color to make the viewer aware of his body and his movement in space. The absence of sound also played such an important role?

Hmm, not specific I would say. But I think you can achieve a similar effect with sound or even with a combination of sound and visual. But in the extent of the exhibition (sound of shadow), to add sound sometimes takes away some of the strength of the visuals. So to use all the senses, doesn’t always make the experience better.

In my thesis, I want to research the relevance of (new) media for our perception of space and of the body. I am interviewing you because I want to look at contemporary (media) artists and at how they engage with these topics. Do you have an opinion about that? How do you think that your work as an artist can be of value for our awareness of the influence by media and technology on our use of space and of the body? Maybe you can talk more about what this topic means to you, or how are you planning to research it in the future and how this relates to previews research/ works.

Of course do media or new media effect our perception of space and the body (like McLuhan says, the extensions of man). Almost everything around us is mediated. Sometimes we just don’t realize. Now people start to create an awareness of their virtual other, for example the effects of online social networking.

Because of the technology drive, media keeps on changing and developing. It seems there isn’t going to be a stop (soon). As an artist I can only try to create awareness about mediation and technology. But for that I also have to accept and embrace technology, because I have to understand what’s going on. Of course I don’t think technology is a bad thing, the only thing is that it can be used in a bad way.

About my research, I am still defining my research boundaries. But it concerns the relation between artist, public and technology in a (new) media perspective. The technology will continue developing, so to keep in the game, the artist should follow these developments and explore the boundaries of the technology. The public will do the same in their own way. So they form a kind of a triangular relation around what might be context.