Since I am a huge Beatles fan and I’m currently enrolled in the Information Visualization course I want to give this project some attention; Charting The Beatles, lead by graphic designer Michael Deal. This projects attempts visual analysis of various aspects of The Beatles’ extensive oeuvre, such as collaboration proportions in the group, references between songs, work schedules and song keys per album, through information graphics. The project is still in development, in fact, it is an open collaboration. So, should you be interested in making a visualization of any aspect of The Beatles’ music, it is possible to participate.

This project sheds interesting new light on developments within the group, through info graphics, enabling the public to discover new aspects to the Fab Four. For instance, the authorship and collaboration graph (based on authorial attributions quantified by William J. Dowlding in the book Beatlesongs

and and Mark Lewisohn’s The Complete Beatles Chronicle), shows us “clues about the band’s gradual fracturing as each member becomes more independent. Red stalks (signifying jointly written songs) decrease in the second half of the timeline; the split-color bars give way to solid bars of a single color. George Harrison also began to compose more music as he matured as a songwriter, signified by the increase in green bars (Lennon and McCartney’s lack of support through Harrison’s development is widely cited as a factor contributing to the band’s eventual breakup).” (Deal, 2010)

This way the info graphs give visual clues about phenomena otherwise unknown, or at least less concretely visable. While it is to doubt if, for instance, the collaboration rate in A Day In The Life (one of my favorite Beatle songs) really is quantifiable in 40% McCartney and 60% Lennon, a Beatles fan like myself can gain valuable new insight.

Another example is the self reference chart. The Beatles often referenced lyrically to their own earlier songs. This chart defines the lyrical phrase, the connection between the two songs in which it is used and at what point in the song it occurs.

This way, The Beatles’ discography is visually interconnected. I, for one, didn’t know Glass Onion on the White Album was so heavily interconnected with five previous songs on Sgt. Pepper’s Lonely Hearts Club Band and Magical Mystery Tour.

Another example the Song Keys Chart, visually showing the keys of the songs per album. This chart is somewhat more complicated, the viewer definitely benefits from some musical/harmonic knowledge. “Earlier pictographs gravitate towards the upper right, the keys where the standard pop/rock blues I-IV-V chord structure is easier to finger on a guitar. Later pictographs fan out as the band’s use of song keys became more varied, and as more songs were composed on the piano. The data are based on the song key appendix in Ian McDonald’s book, Revolution in the Head: The Beatles’ Records and the Sixties

I am not surprised that the earlier Beatles albums are so Major (Major scale is generally defined to be more ‘cheerful’ sounding than Minor scale) because, for instance, a typical early Beatles song like ‘She loves you’ (yeah yeah yeah) sounds quite cheerful. But the later work is definitely more serious, varied and emotional, though Major scale is still heavily represented, for instance on Let It Be, which is an album quite full of melancholy. But this also gives an idea about the Beatles progression in songwriting and more complex use of harmonics, since Major scale does not always has to sound as ‘cheerful’ as it did in the first years of Beatlemania.

A last example is the working scedule chart, from the early years.

The differences in how time was spent are particularly clear in this chart. In the early years performing and touring took up almost all time, while later on The Beatles toured only a very small period during the year and spent much more time in the studio, taking studio recording to a next level (e.g. reversing tapes, cutting up tapes and sticking them back together, experimenting with weird instruments and different electrical wiring schemes etc.). In this chart you see the priorities shift over the years, from a popular boys group (also with shooting movies like Hard Day’s Night) controlled by the record company to the more independent avant garde studio experiments on for instance Sgt. Pepper’s Lonely Hearts Club Band.

So, Charting The Beatles can definitely contribute to shedding new light on the work of a musical group which parted ways multiple decades ago. Even the most hardcore fan who has read all biographies etc. did not see data about The Beatles combined this way and can draw new conclusions from this. Why then is it so hard to see the bigger picture and compare facts when reading a book? As Otto Neurath puts it; “Many people who are confused by books and lectures can grasp facts and their relationship through visual expression, supplemented only by a brief verbal explanation. The basic aim of this visual method is to humanize and democratize the world of knowledge and of intellectual activity” (Neurath 1937). Confused is maybe to strongly put, since many people are not able to draw the same conclusions from books then from visualizations. People are visual creatures, comprehending from visuals is simply easier than from text. Marie Neurath puts this in the context of education: “visual education is related to the extension of intellectual democracy within single communities and within mankind.” (Neurath 1973, p.247). Visualization can contribute to accessible easy learning about cultural phenomena, such as The Beatles, even nearly fourty years after the band broke up we can still learn a lot of new things. The way the information is presented to us matters more than the information itself. Charting The Beatles can contribute to an understanding of a musical milestone long gone to pass.

It would be nice to contribute something (maybe in information visualization class? Next year maybe, since the course is over:))
You can contribute on the Flickr Page. Lastly, two contributions to this project, which are not very dense with information and not as good as the visualizations above, but funny nonetheless: 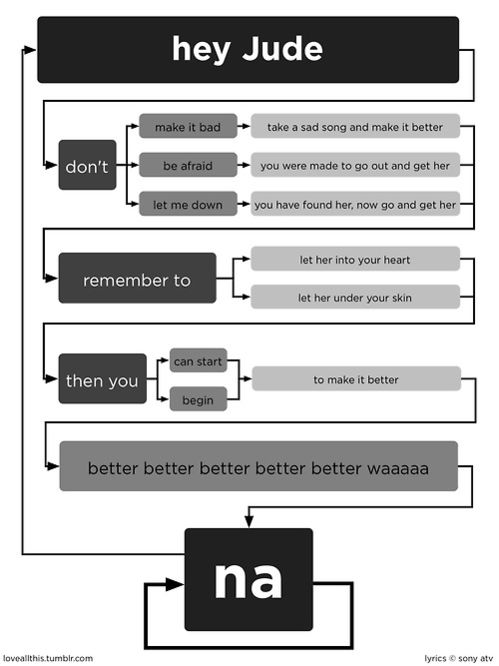