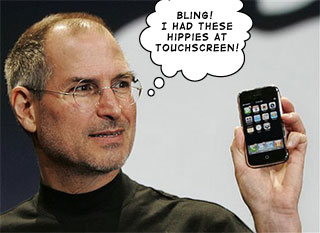 It’s 2001 and while me and my friends are still discussing which is the better portable audio device, a discman or a minidisc player, we could bury the hatchet. The was was over. An atomic weapon arrived at the scene where we were pinching eachother with toothpicks and chopsticks. Mp3-players were the future.

Apple was back on the scene! The iPod. Of course Apple had been around all the time but the name sounded as vague and distant in the past to me as Commodore, Tandy and Atari. You only really saw their machines on television and in movies but never in someones actual living room. And the sporadic instances in which you found yourself behind a Macintosh – I think my town’s library had one – you didn’t have  enough time to figure out why everyting was mirrored and upside down from what we were all used to. Let me be frank, I never cared much for MacOS and the way in which a lot of Apple machines were defined by coded hardware instead of customisable parts, but with the iPod they hit it big; A very simply designed and clever device.

Since the iPod was launched Apple has regained a lot of it’s former glory. But how did they manage that? Inventiveness? I don’t know, my friend had a phillips device from before the iPod entered the fray and it had a 20 gig harddrive and easier navigation (it just looked like this and weighed about the same, but still…) Reliability maybe? Not really, just check out the failure charts of the original iPods. Also, did you know Steve Jobs got fired from Apple in the mid eighties because he was putting too much time and money into promoting and launching undertested and faulty hard- and software? You do now. Affordability? No, Apple computers are always at least 300 to 400 euro’s more expensive than their Dell and HP counterparts while fitted with the same processors (Apple switched to Intel in 2005 making their hardware more easilly comparable).

The trick that put Apple back on the board was simply through marketing. Bill Gates’ and Microsoft’s monopoly position lulled them to sleep while Apple was and is still promoting its products in such a way that suggests that if you don’t buy their products you’re going te become a dull and boring person. Marketing their product as hip, fresh and young while Windows users are square, spreadsheetprogramming droids. Check it out:

This commercial is where, in my opinion, Apple is going way overboard. Of course, it’s funny. But is it really okay to sell expensive products that people don’t really need – I mean come on how many of you mac users use your pc for something radically different than your friends who use windows? But that’s capitalism for you: Advertisement as qualified lying. Now don’t get me wrong, I’m not hot for Microsoft either (especially after Vista…) but they effectively responded to the “I’m a mac” commercials with Lauren the laptop hunter:

Of course this is also a commercial but it does make sense. Most people don’t care for quadcore processing and just want a nice screen and keyboard so why charge them for more than they need? Especially in a difficult financial times for many families it raises the question if it’s ethically proper to manipulate people intp buying a Mac when they have no need for it at all.

And now there’s Apple’s newest gimmick: the iPad. The past few months I’ve been aching to ask the question I’m about to ask of all of you right now: Why? I’m serious, it all looks fancy and fragile enough but who would want to pay 500 euro for a device that has less functionality, processing power and supported software than a regular mini-laptop for a higher price? In the next couple of weeks I’ll be looking into hard- and software competitions of the past and present in an attempt to answer these questions myself. Next up the console wars, stay posted.