‘A Collection of Many Problems’ by Garnet Hertz – A Review

Alternative post title: The Good, the Bad & the Downright Crazy.

Mail-by-rocket, cat pianos, astrolabes, Inca quipu knots and musical fingers. Seems like a fairly random collection of things, doesn’t it? They do have one thing in common, though. They’re all dead forms of media; either because they’re downright silly or impractical – like the mail-by-rocket and cat pianos – or they’ve outlived their time and usefulness – like the astrolabe and the quipu knots. All these objects and more can be found in a wonderful little book called A Collection of Many Problems.

Meticulously collected and assembled by Garnet Hertz, A Collection of Many Problems contains a staggering variety media. Presented without words or commentary, the reader can leisurely browse through one form of media after the other. For those well versed in the history of media, it’ll provide a well crafted, compact overview of media throughout the ages and will possibly contain some old favorites. For those less involved with media and its developments, the book can provide a fascinating eyeopener into mankind’s almost primeval need for representation and its struggle with how to get a message across. At the very least it should illustrate to the reader that ‘the media’ didn’t start with the invention of the newspaper, cinema, radio, and television. 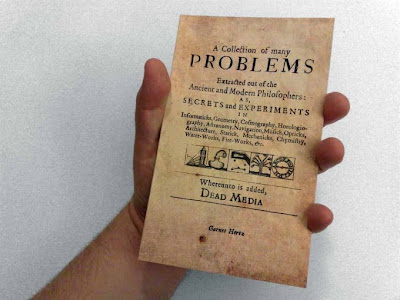 Garnet Hertz, the curator of this catalogue, is a California based scholar and artist who is affiliated with a wide number of research and teaching institutes, as well as a contributor to festivals such as DEAF and SIGGRAPH. A Collection of Many Problems was featured in an exhibition titled “In Memory of the Dead Media Handbook” in Milan, Italy in October 2009. The title of this exhibition refers to Bruce Sterling’s Dead Media Project and its call for a Dead Media Handbook. The goal of Sterling’s project was to chronicle the history of media with a particular focus on long forgotten and obsolete technologies. The project ran as a mailing list and managed to collect over 600 notes in total. In his Dead Media Manifesto, Sterling proposed that this collection take the form of a Dead Media Handbook. According to Sterling, there existed a clear need for:

A Collection of Many Problems is Hertz’s attempt to address this need. The end result is an accessible, bite sized book and a strong attempt at media archaeology at that. In a time where media are developing and evolving at an increasing pace, it seems all the more relevant to keep an eye on the past, either to be inspired or just to make sure the same mistakes aren’t repeated. Even though the book provides little detail on any of the featured media, it does manage to illustrate the highly relative nature of the term ‘new media’. What does it mean to be new? If anything, it demonstrates that there have always been new media and that more will undoubtedly follow long after our current ‘new media’ have faded away and become old, dead media themselves. To me the book is a lovely collection that allows me to wander throughout the ages and be amazed at the wonderfully creative solutions – failed or otherwise – mankind has developed in order to cope with its need for representation. It reminds me of the originally Renaissance era phenomenon of the cabinet of curiosities or Wunderkammer. Rooms where well-to-do individuals would collect and display curious objects from all corners of the world that seemed to defy classification. If the idea of a media Wunderkammer appeals to you, you should definitely pick up a copy of A Collection of Many Problems. I doubt you’ll find a collection as accessible as this one anywhere else. 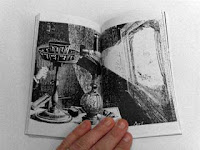 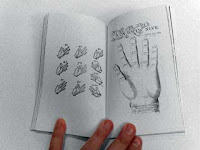 Full details:
A Collection of Many Problems
by Garnet Hertz, 2009
Available for sale here.