In here book, Vismann writes a geneology of the media-technological conditions of files and recording devices with a view to their largest area of application, the law. Files in this geneology are defined as the medium between the authority and administration while three entities; truth, state and subject are under constant modification in the forming of Western institutions. In her work, Vismann does not write about the content of the law but elaborates how files and administration technologies in service of the law form assumptions of truth, state and subject in Western history. As a result, Vismann’s geneology investigates the continious formalization and differentiation of the law. With the model in mind of the Rechtsstaat, Vismann gives insight in the abstract law on one side and the agencies that set down and enforce the law on the other. Mutations of the processing of files and mediatechnologies are an essential aspect by means to preserve power and authority. The book is written for anyone who is interested in or uses file processing and administration technologies.

Vismann kicks-off by exploring oral cultures in searching for the origin of the law and writing by using the work of enthnologist  Claude Lévi-Straus in combination with the commentaries and theories of the founder of the deconstruction theory  Jacques Derrida.  In this sense she gives an answer to the question how the law is function without record keeping devices. Vismann analyses en deconstructs the literary works of Kafka and Bartleby to bring to light the realities of the law whom otherwise, according to Vismann, would be kept unnoticed. Further, Vismann describes the methods of philologist Budé in the search for the ur-text by analyzing the body of the Roman law issued under Justitian I. With this analyses the forming of the law system of the empire of Rome is set out. Because of the rapid proliferation of files with organizational and, for instance, retrieval problems as a result, mediatechnologies and administration tactics needed to be developed.  Egyptian papyrus, kept on rolls, was a common used medium but wasn’t suited for archiving or fast retrieval purposes due to it’s serial text searching. Therefore the first wax ‘notebook’  or codecs made it possible to browse through text accompanied by the new invention the ‘stylus’ by which smaller writings was possible.

By these new characteristics of mediatechnologies, administration and file processing was revisioned. The work of Vismann is solid and rich on reference material. It gives the reader an insight that ranges from the work of the Roman magistrates to the concern’s of the public’s personal files kept and processed by the government. The complete media-archaelogic is set out from oral cultures to present in which Vismann sees the reappearance of files as stylized icons on the computerscreen as the closure of an epoch of file processing. The architecture of digital machines can be seen as organized by files and their organization techniques with the central processing unit which controls all that goes on in the computer. In this sense the history of files contains a prehistory of the computer which makes Vismann’s work a great contribution for further analyses. 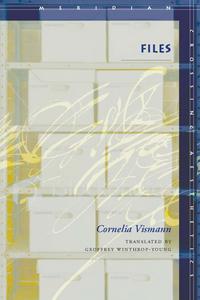