The outrageous amount of information that we are able to store these days awakes more dilemma’s  than just the one about privacy that’s discussed by many. Companies like Google and Facebook can collect data about their users and save it for years on gigantic servers. The alarm bells start ringing at many theorists and freedom fighters around the globe. Joanna Zylinksa shows us in her book ‘Bioethics in the age of new media’ (2009) that privacy and control are not the most fundamental topics when we think critical about new media and technology. There is another danger that lies ahead that we have to be aware of. Technology and mass storage of information could change mankind forever.  Or as the summary of the book displays: ‘the concepts of “the human”, “animal”, and “life” are being redefined’. What if not our digital identity, but our physical identity could be stored on computers, and all the flaws or perfection in our DNA are out in the open? How would that influence society?

One of the debates Bioart tries to generate is the one about the consequences of an engineered society. Bioart is made by artists working with biological material, like DNA or genetically modified bacteria. The most provoking piece of bioart is the fluorescent rabbit Alba, named GFP Bunny (2000). It was bred by a laboratory in France, with gene transplantation from a jellyfish, and should be lend to the artist Eduardo Kac, but the order was rejected at the last minute. The ethical commission of the laboratory refused to give permission, because it could get them into trouble. This incident describes the attitude from life scientists towards other disciplines, like art and also humanities. 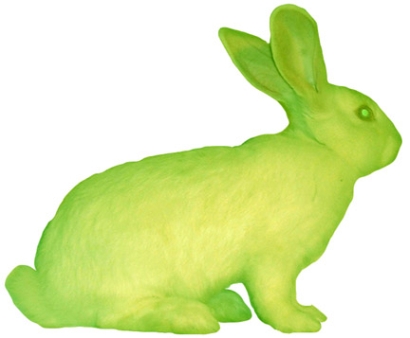 Joanna Zylinksa claims that new media studies and cultural studies are a valuable background to contribute to the bioethics debate. A line that beautifully depicts Zylinksa’s sharp vision why this is so:  ‘Media and cultural studies analyze the relationships between humans and technology as a cultural, historically specific process and pay attention to the specificity of the media forms and practices such as digitization, interactivity, convergence, and virtually associated with more recent technological experiments that shape our ontology and epistemology – our being in the world and our ways of knowing it.’(Zylinksa, 2009, preface) Philosophy, theology, law and medicine are not suitable to cover the whole debate. Zylinksa wants to introduce a new bioethical framework for the future that goes interdisciplinary.

Medicine and biological students learn to create a natural distinction from the (living) biological material they work with. The experiments are done in the name of science, and it is focused on the results rather than the process towards it. This causes that the scientist alienates from the animals. Bioartists are very aware of the proceedings they carry out, that are the most important parts of the artwork. To genetically modify bacteria means that you are changing life! Whereas life scientists could be to busy making sure the right genes split or transform. The acts become a routine to achieve successful results, while they are of course being carried out according to their protocol. But what is the protocol of bioartists? And is it ethical if artists use biological material for their work? These questions are answered in Zylinksa’s book, making the complex dilemma’s sound logical and easy. Bioart is valuable because it gives normal people the change to feel like they could contribute to issues they thought were only assigned to scientists. People become conscience of human-technology interaction. This argument and the fact that challenging the dominant biopolitical regime is always a good thing, makes Zylinksa conclude that bioart can indeed be ethical.