In an age where the iPhone and similar devices have become staple accessories of an always connected global citizen, it is high time to track the origins of the mobile phone, its emergence as a crucial tool for economic transactions in developing countries and its ever-growing intersection – even overlap – with digital media. Mythologie du Portable [Mythology of the Cell Phone] by French communication scholar Laurence Allard does just that. This eminently readable essay follows a genealogical approach to examine how the ubiquitous mobile has grown tremendously – not only from a technological standpoint, but also a socio-cultural one – reaching the status of myth.

One of the most relevant topics tackled by Allard is that of identity building, as she relies heavily on European sociologists Ulrich Beck, Charles Taylor, and Anthony Giddens – particularly on their contribution to the concept of “reflexive modernization” (Giddens, 1991). Based on this notion, she proposes “expressive individualism”, the result of creative work done by digital natives through digital technologies – such as taking photos with a mobile phone and uploading them on a social media platform – for the purpose of constructing and sharing an identity (Allard, 2009: 37). Allard thus aligns herself to theorists like social networking sites ethnologist danah boyd, who also professes the idea of building a digital body and writing oneself into being through these social tools (boyd, 2008: 12). Another aspect inextricably linked to these technologies is the culture of transfer; cell phones are situated in rich media environments, acting as both containers and transporters of various types of content – photo, video, MP3 – between two mobile devices or a phone and a computer (Allard, 2009: 42-43). This permanent exchange of content turns users, according to Allard, into designers who adapt a device to their own needs of self-expression. Ho as wever, the author suffers from an overly positive attitude towards such modes of expression, praising themways to present the “interiority of individuals” (Allard, 2009: 41) or host “authentic manifestation” of actual thoughts and desires (Allard, 2009: 40). It should be considered, as the same danah boyd argues, that teens, for example, want to “look cool and receive peer validation” (boyd, 2007); peer pressure can significantly impact someone’s digital enterprises, be they Facebook profiles or MySpace-style mobile phone photos. 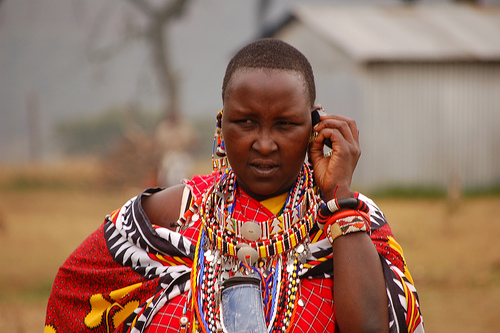 Allard nevertheless compensates for this noticeable lack of critical intervention. The book’s final chapter sees the usability of mobile phone expanded to an immediate influence on people’s daily lives in the broader context of developing countries. Mobile banking applications like the Kenyan M-PESA are often more advanced then those of Western countries. Women in Bangladesh achieve a certain degree of emancipation as they are trusted with Village Phones by the now legendary Grameen Bank. Youngsters in Senegal have social nights during which they make up for limited Internet access by showing photos or sharing music via their cell phones. These are just a few instances of phones fostering social advancement. Allard is careful to point out that mobile devices are temporary solutions to long-term problems; the digital divide cannot be fixed with phones, especially in environments where poverty, disease and political instability reign supreme. The mythical status of the phone pushes poor families to shell out close to 50% of their income for access to an aforementioned village phone, thus defeating the device’s purpose as alleviation of financial burden.

The author also closely engages with certain myths such as the ‘citizen journalist’ or the ‘mobile activist’ in politically turbulent regimes like Iran, where many a passerby captured the very public death of Neda, a young woman contesting the election results. While filmed or photographed content can be more easily shared through SD cards, anonymity is hard to maintain with SIMs; activists can be localized, monitored, and ultimately punished by governmental authority. Had Allard pushed her discussion of phones one step further and looked at the always connected side of smart phones and practices such as checking into Foursquare or constantly tweeting on both trivial and current affairs, this tiny book would have neared perfection. If you are interested in how Philipe Kahn birthed the camera phone whilst his wife was giving birth to their daughter, how technological conventions like the GSM came about, why an SMS has 160 characters, or why feminist epistemologist Donna Haraway or French theorists Michel Foucault or Roland Barthes are relevant to new media, then this is the book for you. If you want critical views on identity building and the mobile practices of the 2.0 generation, then it is best to look elsewhere.

Giddens A.(1991). Modernity and Self Identity. Self and Society in the Late Moderne Age. Cambridge: Polity Press.