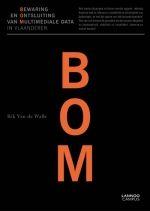 Endless rows of audio recordings, video tapes and all kinds of other audio-visual information can be found in archives all over the world. According to UNESCO there is over 200 million hours of audio-visual material on our planet, the only problem is that a great part of it is decaying; cultural and historical recordings are not going to last in their original storage formats. Digital technologies provide new possibilities for storing this cultural heritage, but the question is how do we best use these technologies to secure our collective memory?

This problem is also valid for the province of Vlaanderen in Belgium, that is why in 2008 a group of researchers started the BOM-vl project (Preservation and Distribution of Multimedia data in Vlaanderen) that was initiated by the Flemish minister of Economics, Science, Innovation and Foreign Trade. In their book BOM they try to give answers to the following questions:

“How can sustainable archives be designed taking into account the inherent instability and volatility of technology, and the regime of intellectual property?
How can a balance be struck between integrity and usability, stability and variability, and preserving but keeping alive?”

The book is divided in 11 chapters that each contains an article on one of the topics concerning the digitalizing process. This process covers everything from choosing what material is being digitized to how it is being presented to the visitors.

One of the topics in the book is that of the degree of participation of the visitor, the consumer. The book proposes a more active relationship with these consumers. For example the tagging of cultural artifacts by the visitor via the Internet. A lot of archivists are afraid that these kind of participation’s will result in the deterioration of the archives, it will become a mess. But the book shows some examples of projects where the results of such a system were very positive. One of the examples given is the Dutch social tagging project Waisda?. The book discusses that a balance must be found between a technological determinist view and a users determinist view, which is a discussion I think is very interesting in light of the future of archives.

A lot more Dutch examples are given, at which especially Beeld en Geluid is playing an important role in the arguments the Flemish researchers are trying to make. In Holland, and a lot of other countries, the debate about digitalizing archives is a couple of stages further, on a more political level the decisions have been made and the archival organizations have started digitalizing their archives a couple of years ago. Therefore the book doesn’t really offer any new views on the subject or more information. So for an Dutch new media enthusiast like me it isn’t an real eye opener. However one of the topics in the book is very interesting and can be found in archival debates all over the world, the openness of an archive. To what extent should archival organizations give open access to their content? A couple of good arguments are made about this and again examples from the Dutch are given. One of these is the open archive project Open Beelden, this project shows how material can be shared with the users for free, but also more commercial models for distribution are sketched like Video on Demand.

On a more personal level, there is an article that I really liked on the use of archived material to make new creations; a process also known as found footage. The value of preserving old material and how it affects our memory and understanding of the past is being discussed. In the discussion about preserving material it is also important to argue why we should preserve it in the first place, but it also fits in the discussion about the open accessibility of audio-visual material by giving the consumers the possibility to use the material to create new content.

The book doesn’t really deliver final answers and mostly just sums up examples of how the digitization of archives already has been done in other countries. However for the Flemish cultural heritage it is a very important book exactly because it gives these examples and gives arguments that we already know. Hopefully the BOM-vl project will succeed at the important task to safe this heritage and to choose for new ways of distributing it.