Hyves, THE information source for companies

How would I do research in web 2.0 and Social Network Sites? First I have to make clear for myself what web 2.0 exactly is. According to Tim O’Reilly, one of the founders of web 2.0, web 2.0 existed after the dot.com crash in 2001. In the summer of that year there was the start of a conference brainstorm session about web 2.0. A year and a half later there was a clear definition of web 2.0. Web 2.0 had no clear boundaries and you can visualize it as “a set of principles and practices that tie together a veritable solar system of sites that demonstrate some or all of those principles, at a varying distance of that core.” ((O’Reilly, Tim. What is web 2.0: Design patterns and Business models for the next generation of software. Communications & Strategies, No. 1, p. 17, First Quarter 2007)) Web 2.0 is a platform, is based on collective intelligence and has a huge users add value. The emphasize is not anymore on finance but on the user.

It’s also important to define what social network sites are. Danah Boyd and Nicole B. Ellison, wrote an article about social network sites. They define social network sites as web-based services that allow individuals to contruct a public profile within a bounded system. They articulate a list of other users with whom they share connection and view and traverse their list of connections and those made by others within the system. The nature and nomenclature of these connections may vary from site to site. ((boyd, d. m., & Ellison, N. B. (2007). Social network sites: Definition, history, and scholarship. Journal of Computer-Mediated Communication, 13(1), article 11. http://jcmc.indiana.edu/vol13/issue1/boyd.ellison.html ))

Then the next question is, how to do research into social network sites? According to Steve Laura Garton, Caroline Haythornthaite and Barry Wellman ((Jones, Steve. Studying social on-line networks. Doing Internet research. Critical issues and methods for examining the net. Sage publications. California. 1999)) we have to go beyond studying single users because communication via computer networks develops. Social network analysis focuses on patterns of relations between and among people, organizations states and so on. They seek to describe networks of relations as fully as possible, tease out the prominent patterns in such networks, trace the flow of information through them, and discover what effects these relations and networks have on people and organizations. ((Idem, pag.76))

To describe how I would do research to social network sites, I think I need to come up with a subject to do research on. For example, when I like to find out how information that you put on SNS to create your identity with, is used by companies in terms of knowing capitalism, I have to do some theoretical research first.

Nigel J. Thrift comes up the term ‘ knowing capitalism’ which belongs to the culture circuit of capitalism. He defines it as ‘knowledge’s which are transmitted through gossip and small talk which often prove surprisingly important are able to captured and made into opportunities for profit.” ((Thrift. J. Knowing Capitalism. Theory, Culture and Society. Sage. London. 2005.))

After I gathered all the theories, I would link them to each other. What does different critics think about my subject? For example, David Beer wants to make clear that when we think of users of social network sites, we don’t only must think of it’s profiles as Boyd and Ellison do, but that we also have to think to the ones with capitalism interests, like J. Thrifts does. ((Beer, David. Social network(ing) sites…revisiting the story sof ar: A response to danah boyd & Nicole Ellison. Journal of Computer-Mediated Communication. Vol. 13, nr. 1, article 11 (2007). 24-09-2010. http://jcmc.indiana.edu/vol13/issue1/boyd.ellison.html))

Then I would take a casus, like Hyves. Hyves is a social network sites with over six million members. Like Boyd and Ellison say, on Hyves you can shape yourself exactly as you want others to see you. On hyves you can send notes and messages to each other, you can upload a profile photo, or other photos and you can become a member of different kind of groups with members who share the same interests. You can also add brand names you like to your profile.

Want to know more about Hyves? Eva Kol is a previous master student of the New Media Master who wrote her master thesis about hyves. In her book ‘Hyves’ she describes the history of Hyves, how it works and how it developed so quickly.

The theory I’ve gathered I would apply to the casus I chose, Hyves. Like Beer said, social network sites are giant databases with information of the users. ((Beer, 2208)) This is also the case with Hyves. For example, by adding brand names to your profile it is easy and inexpencive for companies to gather information of the users of their products. By clicking on the brand, you see which users has added the brand to his or her page. It’s even possible to divide the users in different categories like gender, age and geographical distribution. 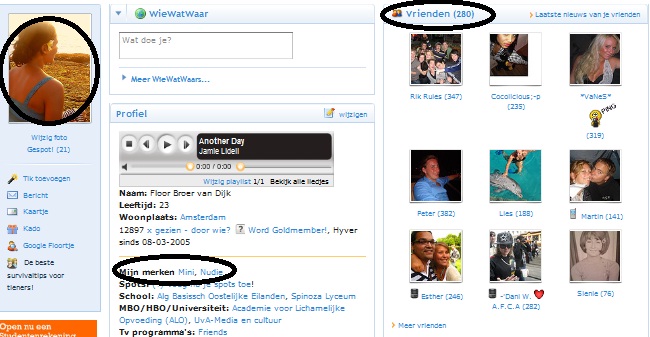