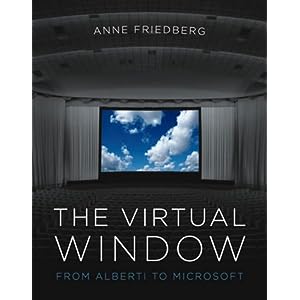 In The Virtual Window: From Alberti to Microsoft (2006, MIT Press), (the late) Anne Friedberg traces the history of the relationship between the window and the human experience, from the physical to metaphorical. She draws analogies between the figure of the framed window and the metaphysical framing of experience to provide an historical exegesis detailing the developments of (primarily Western) spectatorial experience in relation to how our perceptions of the world are structured.

Starting with a reference to Leon Battista Alberti’s 1435 treatise on painting and perspective, in which he instructs aspiring painters to “regard the rectangular frame of the painting as an open window (aperta finestra),” Friedberg analyzes and refocuses the common interpretation of Alberti’s trope – the transposition of 3-dimensional reality onto a 2-dimensional (virtual) picture plane – to, first, the use of the window itself as an architectonic figure, then to its metaphorical uses in painting, architecture and moving-image media. From here she examines the window in three separate, but sometimes converging, registers: the architectural (e.g. as Vivian Sobchack uses for her phenomenological discussion of the viewing subject ), the metaphorical (e.g. as a frame that emphasizes the fixed relation of a viewer to a framed view), and the virtual.

We may know of Alberti’s legacy through terms as the “vanishing point,” and, “foreshortening,” which catalyzed the giving way of hieratic painting styles to Renaissance perspective. Friedberg provides sub-chapters with the perspectives of other thinkers between her main chapters, resulting in a historical foreshortening of the past through a contemporary lens. The five chapters – The Window, The Frame, The “Age of Windows”, The Screen, and The Multiple – are each punctuated by musings on Descartes’s metaphorical use of the word “window” to describe the eye, Heidegger’s use of the “frame” as a metaphor for “representational thought,” Henri Bergson’s uses of “virtual” to describe the nonmaterial properties of memory and “multiplicity” to account for the durée of lived time, and Paul Virilio’s media-converging use of the “screen” to describe the disappearance of matter.

Friedberg reminds us of the original meaning of “virtual” before it came to be predominantly associated with the digital world:

Virtual (Latin, virtus, for strength or power) of, relating to, or possessing a power of acting without the agency of matter; being functionally or effectively but not formally of its kind (her emphasis).

Thus, “virtual” can define both images that do and do not have a referent in the real. In this true sense of the term, all images that are mimetic (e.g. reflections in a mirror, the projection in a camera obscura, images reproduced through a lens – made of glass or in the eye) as well as simulacral (e.g. an image imagined in the mind, a CGI Buzz Lightyear made of 1’s and 0’s) are virtual. 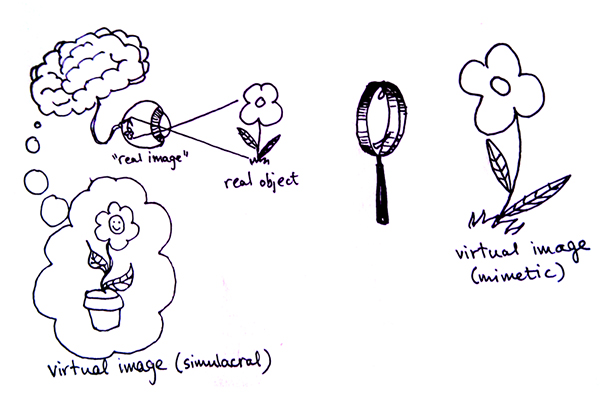 In her chapter on The Frame, Friedberg points out that pictures and paintings were not always framed, and until between the 13th–15th century were predominantly site-specific and painted into the wall (as frescoes). Although frames enabled the picture to be separated from the wall, they required the viewer to be immobilized in relation to the frame. This is true as well for moving pictures (e.g. as produced by a camera obscura, or within the frame of a film), and creates a “phenomenological tangle”: the paradox of the mobility of the image versus the immobility of the spectator.

The frame creates an “ontological cut” between the material surface of the wall and the view contained within the frame’s aperture. For example, in a cinema theater, material space meets virtual space at the edge of the screen, providing another paradoxical tension between the materiality and immateriality of spectatorial experience. In this “architecture of spectatorship,” light becomes a building material, the wall becomes a screen, and the surrounding walls provide the darkness that magnifies the intensity of the illuminated image.

Recollecting Heidegger’s idea of the “enframing” of experience, we might imagine an instance where a real life situation “feels like a movie.” The existence of a frame posits the existence of a world outside of the frame, a “radical elsewhere” (Deleuze) – thus the frame always “carries with it some subjective consequences.” 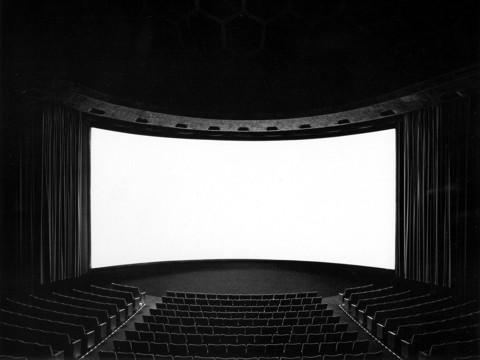 Cinerama Dome, Hollywood, 1993 Hiroshi Sugimoto takes long exposures of movie theaters, rendering all the light reflecting off the screen over time as an unbroken white light, while any movement of the audience renders them invisible.

Friedberg’s chapter entitled The “Age of Windows” finds its name from a 1936 film adaptation of an H.G. Wells novel, The Shape of Things to Come. In the film, set in a futuristic 2036 where windows have all been replaced by virtual windows of telescreens, a character remarks that the “age of windows… lasted four centuries.” Here Friedberg begins a lengthy, though thorough, examination of the architectural and material development of the window, from the invention of plate glass and its representations in paintings by Vermeer, to its use as a “dematerializing” wall in structures such as London’s former Crystal Palace and the Bauhaus building in Dessau. She also recalls Sergei Eisenstein’s plight against film industry aspect-ratio standardization, and Le Corbusier’s addressing of the peripatetic viewer through panoramic windows.

All of these examples serve to illustrate and provide further bases for her two main paradoxical tensions: the materiality of the screen/immateriality of the image, and the mobility of the image/immobility of the spectator – and at times her exegeses feel like a peripatetic exercise in circles. But she picks up steam again in her sub-chapter entitled Bergson’s Virtual. Here, she uses Bergson’s idea of the multiplicity of subjectively observed time (as his metaphysical contribution to Einstein’s theory of relativity) as a segue into talking about how, in our post-industrial, post-atomic age, this multiplicity “allows us… to inhabit, in a virtual sense, two or more spaces at once, and equally, two or more times.”

Cubism, as a break from Renaissance perspective, introduced the fractured, single viewpoint, where multiple objects exist simultaneously and adjacently on the same spatial plane, and sequence yields to simultaneity. Just as one can see both the exterior and interior of the Dessau Bauhaus building through its “dematerializing” glass, and as Picasso and Duchamp represented multiple perspectives simultaneously on their canvases, our contemporary activity of multitasking breaks from the tradition of logical linearity.

Friedberg invokes Erwin Panofsky’s notion of perspective as “a ‘symbolic form’ – a way of apprehending the world through a mental apparatus…” If this is so, she continues, “the representational postulates of perspective have met their end on the computer screen… [If] perception is conditioned by representational habits, then our new mode of perception is multiple and fractured.” She concludes that our current mode of perception “is ‘postperspectival’ – no longer framed in a single image with fixed centrality; ‘postcinematic’ – no longer projected onto a screen surface… [and] ‘post-televisual’ – no longer unidirectional in the model of sender and receiver.”

All of this is demonstrated in our contemporary lives on a daily basis. Consider the number of windows or frames or tabs you might have open as you’re reading this blog post – each frame has its own type of virtual perspective, whether invoking horizontality or verticality, or a transposition of any kind of plane or dimension. The screen in its current form is no longer a light-reflecting material requiring depth in space – instead it is a light-emitting material getting flatter and thinner with each development. This kind of “flattening” is even apparent in the post-televisual sense, where the sender-receiver is one entity, interacting with other sender-receivers.

Although Friedberg’s book was published in 2006 (and the paperback version I read was published in 2009, the year of her death), I would have wished to see her ruminations on the amalgamation of the camera and the screen – a more direct metaphorical link to the window (and mirror), as it involves bidirectional perception. In the case of video-conferencing, for example, the virtual mediation of the screen is directly (more or less) linking distinct but real time, space and sound.

For further information, visit the companion web-site to the book: The Virtual Window Interactive