The free online encyclopedia Wikipedia was launched in early 2001 and has since grown extensively. I has become one of the most used website. If we look at the top-10 of most visited websites (worldwide and often also locally) we see Wikipedia coming back firmly in this list. An interesting research project that shows us the massive collective collaboration on Wikipedia articles is The Iraq War: A Wikipedia Historiography. This project done by James Bridle tries to explore the history and historiography facilitated by the internet, it  is a twelve-volume set of books containing all the changes added to the Wikipedia article on the Iraq War. The fascinating thing is that the article itself in its current status is really short, while the  changes added to the article can fill a twelve-volume set of books. Now this is a great project giving a clear insight on the massive collaboration level of Wikipedia users. 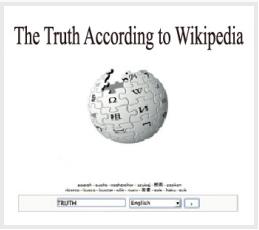 The power of Wikipedia lies withing the fact that it is a free resource where we can all share our knowledge with everybody. The users plays, as with many other succesfull web 2.0 products, in this setting a huge role. The user decides which topics are covered, how they are covered and what kind of information is put available out there. We can also find subjects or topics in Wikipedia that a traditional encyclopedia or dictionary can not provide.

During my Bachelor I allready made extensive use of Wikipedia, so much easier then to slog through the massive amounts of information in the library. One simple search query in Wikipedia provides you with all the information you need. Continuing using Wikipedia I find myself less and less often in the Universities library. Now the main criticism on Wikipedia is the lack of transparancy in the background of the users. How can we know whether a certain user is a professional with an academic background (which would confirm the reliability of the article) or just a noob trying to contribute something. Now if we would be able to introduce this level of acadamic reliability into Wikipedia, would it be peculiar to state that Wikipedia on a certain level could replace the universities library? Or become the online library/encyclopedia for the Global University as discussed in my previous entry.

We allready see several initiatives rising from different areas concerned with de-amateurising Wikipedia. One of them is Citizendium. Citizendium is a project of one of the co-founders of Wikipedia, Larry Sanger. The goal of Citizendium is to improve on the Wikipedia model by providing a reliable encyclopedia. Users can for example not anonymously contribute to Citizendium.
Another initiative is coming from Wikipedia’s users itself, on Wikipedia we can find an article instructing her users on how to use Wikipedia for academic purposes.

With the developments in contemporary media we can conclude that the power to the people is brought back by web 2.0. Or is this mainly an illusion? How Wikipedia or Citizendium wil develop we would have to see, but we  can not ignore the voice of the collective contributors to our knowledge economy.

P.S.: Going into the Wikipedia discussion I forgot to mention the subject of my contribution to Wikipedia this week. Since I have an Amazigh background I decided to make a contribution (concerning Amazigh art) to an existing article about the Amazigh people in Northern-Morocco on the Dutch Wikipedia website. You can find my contribution here.