A few weeks ago, during the practical class of John Haltiwanger, he asked us what we wanted to learn on the computer. There were several people who wanted to learn how to Photoshop. Since John didn’t know how to Photoshop, he purposed to us another comparable program, Inkscape. Was it ok for us to learn how to work in Inkscape instead of in Photoshop? Since I have just a little bit of experience in Photoshop, it wouldn’t be confusing for me to work with Inkscape so I told him I liked the idea of learning how to work with Inkscape.

Anyway the next week, my Inkscape adventure began. John wanted us to download the portable version of Inkscape and since Inkscape is an open source program, it was easy and free to download. In class we were able to practice a little with the program and we learned where to find some tutorials on the internet.

At home I began to draw. With drawing I didn’t have any experience. I always used photoshop to transform photo’s. Like placing a grayscale over the photo and let some details have their original color. I didn’t have any idea how to draw so I googled for a fun tutorial until I found the tutorial about how to make a pacman ghost. I’m a huge pacman fan, so I couldn’t wait to begin drawing my ghosts.

The tutorial was a written tutorial so I couldn’t peak where to click or how to do things. I had to follow the points as described in the tutorial. (While writing this blog, I found the YouTube version of the pacman tutorial.)

I spend one hour to draw one little pacman ghost since some things didn’t work the way the tutorial described but after some research of my own, I created my own pacman ghosts: 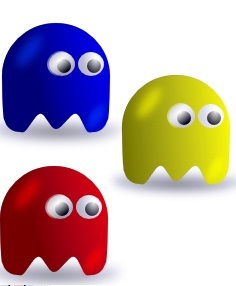 Actually, the ghost is only made from circles. A blue circle which transformed to the shape of the ghost, a second layer of that shape in black which made the ghost 3D by using the gradient tool, two white and two black circles for the eyes. Two circles that transformed into ovals which became the reflection on the ghost and one circle that transformed into an oval that I blurred so that it became the shadow. This blue ghost I duplicated three times and changed the color of the basic ‘circle’ into red and yellow so that the blue ghost now have two ghost friends to go after pacman.

A few days later I wanted to try to work with Inkscape without using a tutorial. Since I only used one tutorial yet, the tools used there were the only tools I know to use. So by putting this little Inkscape knowledge together, I create ‘The egg on a block.’ 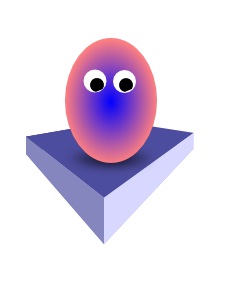 So now I can use the gradient tool, I know how to make a shadow and how to make an object look like a 3D object, but that’s like 0.0001 % of what can be created with Inkscape. I really enjoyed experimenting with the program and I was frustrated that I didn’t know how to use specific tools. On the internet there were so many beautiful images, made with Inkscape, I want to know how to create such images!

For me it doesn’t matter which program I use and since I am a student and Inkscape is free, I love Inkscape! I am a New Media Master student, so  I want to be able to build my own website,  isn’t it useful then to create my own banners, buttons and images!

Bring the tutorials on, so I can become an Inkscape expert!