Fashion is on the street: Fashion bloggers seated front row

Something has changed in the fashion industry. Since 2002 blogging about fashion started and has become more and more popular. In 2003 fashion blogger  Kathryn Finney of the Budget Fashionista was invited to the New York Fashion Week. A year later Fashiontribes was being invited and seated forth row  at shows like Bill Blass. In 2008 Tina Craig and Kelly Cook of BagSnob.com were seated second row at shows like Diana von Furstenburg and Oscal de la Renta. In 2009 famous fashion bloggers were seated front row, even a 13 year old blogger named Tavi Gevinson could be found front row of shows like Marc Jacobs Rodarte and others. 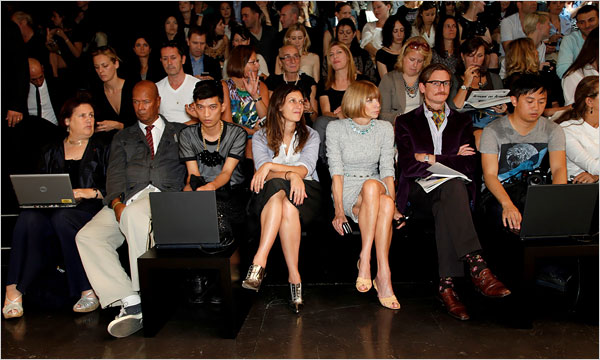 The bloggers Bryan Boy and Tommy Ton by Truce

Tavi Gevinson started writing her blog Style Rookie on March 31 2008 when she was 11. In 2008 she appeared in New York Times magazine and her blog readers increased up to 50.000 readers. In 2009 Tavi partnered with Borders and Frontiers and designed  her own t-shirt.  In that same year she appeared on the cover of Pop Magazine, which feature photographs by Jamie Morgan and was designed by artist Damien Hirst. In 2010 she featured in Teen Vogue and the French Vogue. 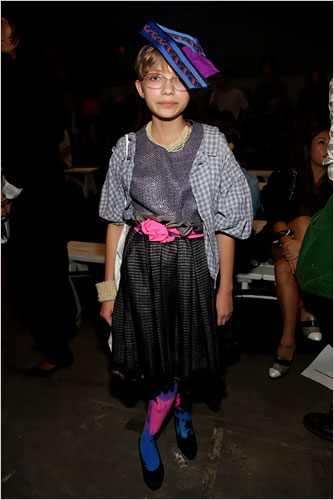 Did something change?
In the article The Year in Style Bloggers Crash Fashion’s Front Row by Eric Wilson we can find an interesting quote from Kelly Cutrone, fashion publicist and founder of the firm People’s Revolution: ““Do I think, as a publicist, that I now have to have my eye on some kid who’s writing a blog in Oklahoma as much as I do on an editor from Vogue? Absolutely. Because once they write something on the Internet, it’s never coming down. And it’s the first thing a designer is going to see.”
In his article Wilson also states that designers are adapting to this new kind of fashion reporting opposed to fashion magazines.  Because the requirements of posting an update to a blog, fashionbloggers can react much faster to the current state of the fashion industry.  He finds that some fashion magazine editors feel threatened and seasoned critcs are afraid to be replaced by fashionbloggers. Fashionmagazines are trying and started their own blogs and tweets, but when you read these magazine new media productions “you often sense a generational disconnect, something like the queasy feeling of getting a “friend” request from your mother on Facebook” Wilsone states.

Citizen Journalism
Axel Bruns analyses this concept of personal publishing, which he calls citizen journalism, in his work Blogs, Wikipedia, Second Life, and Beyond: From Production to Produsage.
In chapter 4 New Blogs and Citizen Journalism: Perceptual Collaboration in Evaluating the News, he compares Citizen Journalism with open source and finds that Citizen Journalism is driven by similar motivations as open source: “it, too, acts as a corrective and a supplement to the output of commercial, industrial journalism. Like open source, too, it has recently begun to challenge the role of its corporate counterpart as opinion (and innovation) leader.”  In the rise of fashion blogging versus fashion magazines, we can see this happening as well. Both report about items of clothing and accessories, trends in various apparel markets, celebrity fashion choices and shopping advice.  Fashion bloggers challenge the role of fashion magazines with their fast growing popularity and becoming more and more acknowledged by the fashion industry.

What next?
In chapter seven Folksonomies: Produsage and/of Knowledge Structures Buns states that we are entering a new postindustrial, networked era where knowledge is distributed by many diverse alternative sources of information which leads to a “mass amateurization of the media”.   This mass amateurization doesn’t have to cause reduction of the quality of information.  “Under the beneficial conditions and in the presence of widely shared understandings of what constitutes ‘quality’, the ‘amateur’-driven processes of communal content creation and evaluation are just as able to generate quality content.” Bruns suggests that our focus in research shouldn’t on be the quality of knowledge or information, but the way this knowledge should be structured and perceived. “our focus shifts from an examination of the produsage of information and knowledge to the creation of information about information, knowledge about knowledge- or in short, to the creation of metadata structures.” Next to that,  Bruns suggest we should ask ourselves what role remains for the professional experts. Concerning the fashion blogs and the creation of content about fashion by amateurs, we should ask ourselves how we structure and validate this new kind of information and ask ourselves what the role is of the fashion magazines in this new playing field.

New role of fashion magazines?
Bruns finds that experts can still play an important role, this role changed from producer of knowledge structures to one who guides the process as a co-curator. But in this role the expert will be dependent of the content delivered by amateurs, this creation of content Bruns calls Produsage. He finds that experts no longer exist at arm’s length from the customers and for this reason  he finds that the user community is not without power. He quotes Benkler: “the user community is not without power…: collective reaction through opinion storms are activated by abusive monopolistic behavior, and can quickly damage the reputation of the perpetrator, thereby forcing a change in behavior in the monopolistic ambition. Competing resources are almost always available, or can be built by the open source community”.
We can see how this occurred in the case of Tavi, the 13 year old blogger. In an interview with Anne Slowey in New York magazine, who has a senior position at Elle,  she stated that Tavi’s blog was ‘a bit gimmicky’. This critique was read by dozens of Tavi’s fans as an example of the tension between old media and new.  Here a 13 year old fashion blogger has the power of a community against the older, more experienced expert Anne Slowey.
Bruns states that this monolistic power of the new leaders of the knowledge space is problematic, because the content created freely by amateurs can be used to create content used for making money. He takes the example of Google and quotes Lanier:“In the new environment, Google News is for the moment better funded and enjoys a more secure future than most of the rather small number of fine reporters around the world who ultimately create most of its content. The aggregator is richer than the aggregated.”
To bring this back to fashion blogging versus fashion magazines, this could become a problem when magazines will use fashion blogs as their content. In that way they can use free content to make a business. This already happened when designers started to sent clothes, bags etc to famous fashion bloggers. These bloggers would write positive blog posts about these designers and gave them very cheap publicity, using the trust of the unknown reader. Here the designers used the new leaders (fashion bloggers) for cheap marketing and the new leaders  used their community for a free bag. Since October 2009, new guidelines from the Federal Trade Commission, require blogs to disclose in their online product reviews if they receive free merchandise or payment for the items they write about.

Conclusion
Personally, I think fashion magazines should acknowledge the power of fashion bloggers and the fact that they will have prominent seating’s at fashion shows. I like the suggestion of Bruns to take up the role as curator and guide the new process of fashion reporting . But the difficulty lies in the fact that all this content is created freely and if you as a fashion magazine  pay fashion bloggers, they might become regular employees and the magic of free produced content is gone. On the other hand if fashion magazines use fashion blogs without paying them, they  make a business with freely produced content. As always the practical interpretation is very difficult.  Fur further reading I would like to suggest the work Copy What Can’t Be Sold (and Sell What Can’t Be Copied): What Musicians Have Learned From Bloggingof Chis Castiglione on how the music industry dealt with digital publishing.

Dodes, Rachel Bloggers Get Under the Tent:  Fashion Once Dismissed Them As Snarky and Small-Time, But Now They’re Getting Respect The Wall Street Journal: September 2006