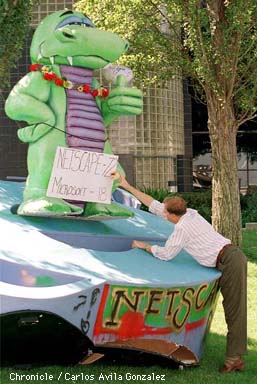 Every web devoloper runs into this problem at one point and sadly, usually very often. Markup language that doesn’t get translated by certain web browsers, negelence of the software developer to web standards  pr simply ignoring them, etc. are still occuring more and more. The browser wars of the late 90’s between Netscape and Microsoft are now named the first browser wars. In this era of the world wide web it still seems logical that all the parties involved were still trying to define the rules of the playing field and therefor not entirely sharing the same web standards because  of differing interpretations of what would be most efficient. Remember I’m talking about the period from 1995 onwards, when the World Wide Web was still up for grabs and nobody had heard of Google yet and most people didn’t even own a PC or were not connected to the internet.

These buttons were usually found at the bottom of websites to tell you if they were designed specifically for the browser you were using. Back then Netscape was the market leader by far almost having a 90% market share in 1995. The picture to the left of this post shows you the messing around between Netscape and Microsoft back in the day.  Apparently the boys from Microsoft thought it would be funny to put a big IE logo in the yard of Netscape developers who responded as you can see in the picture. The sign says: Netscape 72, Microsoft 18, referring to their market share at that time, october 1997. Five years later in 2002 Microsofts IE 6 dominated the market: 90% market share.

Netscape had been pulvarized by Microsoft simply because the latter decided at the right moment in time (around the change of the millenium) to supply their Windows editions with integrated Internet Explorer. This is around the time when more and more people started connecting to the internet and because they already had IE and it was working, they stayed with it.

Now as all those web developers I mentioned will be able to tell you, IE is by far the most efficient browser, in fact it’s reputation amongst professionals is very poor. One of the biggest frustrations with the platform is that it is, as said before, ignoring a lot of Web Standars devised to make the internet accessible to everyone, no matter what browser, OS or whatever you’re using. Microsoft still has such a market share that it can afford to do so but it makes me wonder when they will abandon their ways. Just watch this if you need an example of how mean IE can be to a programmer:

This guy words it better than I ever could. These days, now that the internet is a standardized form of communication there are web standards, except the biggest player is not playing along. It’s like a big game of risk where one player gets half of the board and can’t be attacked by the other players or one of those old mobile phone services where you can only call people with certain providers. I find this unthinkable and very, very disturbing. Okay, Microsoft got a good talking to in a few courtrooms and now they officialy have to provide access to Firefox and Safari on every new Windows system but their market share as of september 2010 is still 50%.

As some of you may know I am very interested in the workings of these kinds of conflicts. How does something like this happen? How come 90% of the people who build the web hate the software 50% of the people are using to display it? If anyone remembers my post on the whole Apple vs. Microsoft debate, where I concluded that people shouldn’t pay money for software or hardware they’re not using, well how about software that straigt out doesn’t work? Okay it’s for free but it’s still being marketed (by the most stupid commercials ever to be seen on Dutch television I might add) as a valid product.

Why and how this is possible I will research in my Masters Thesis. The whole debate of why one inferior technology gets the upper hand over a more efficient one keeps baffling me. If you’re interested, stay posted! Remember, SEGA’s blast processing is still in the works!