The Augmented Reality Curriculum Vitae, in short AR CV, has been developed in a business collaboration between CWJobs.co.uk and Symbian co-founder David Wood.

The project is an initiative that, according to the founders, will help people stand out in today’s job market. A tool that is supposed to facilitate showing “the real you”.

To create an AR CV the developers use life video footage combined with computer generated data. Once the concept for an AR CV is developed, the clients are filmed against a green screen telling the viewer their story. Then, 3D animation and motion graphics are added to develop a story line and create a “fully immersive experience”. The AR CV is passed to a lead developer who puts the various parts into one coherent piece to create the final product, which will look somehow like this:

In order to view the AR CV, the potential employee needs to be equipped with a web cam and a printed trigger (as shown below) that must be held steadily up to the screen to an interactive video box. (It is unsure where the employee receives that box from, but I assume it will be provided by the developer.) 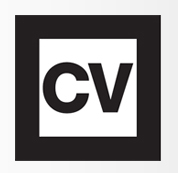 Having discussed the subjects of augmented and virtual spaces and places in our previous New Media theories class, this example seems fitting as an illustration of a (near) future. One that is already very “real” with the technologies available to us.

The AR CV points to a significant topic, asking where and what the world beyond the physical, the “real”, the “actual”, the here and now, the present or even just your presence, is. The concept of reality, with or without the existence of technology, has always been questioned from think tanks with no regards to time or culture. New, interactive, digital and online technologies challenge the definitions of “augmented” and “virtual” reality. This bears the question to what extent and how soon such augmented realities will become common goods in our everyday lives? Apparently we are approaching this moment with significant speed.