In memory of this month deceased Benoît Mandelbrot – mathematician, godfather of fractals and the most well-known fractal the Mandelbrot set – I would like to pay respects to the Mandelbrot, in 3D! The phenomenon of fractals itself is already mind bending, a geometric shape with unlimited detail and recursion as in the Droste effect. But in 3D the whole gets another level of magnificence. Daniel White, creator of the 3D Mandelbrot, called Mandelbulb, introduces: “The original Mandelbrot is an amazing object that has captured the public’s imagination for 30 years with its cascading patterns and hypnotically colorful detail. It’s known as a ‘fractal’ – a type of shape that yields (sometimes elaborate) detail forever, no matter how far you ‘zoom’ into it (think of the trunk of a tree sprouting branches, which in turn split off into smaller branches, which themselves yield twigs etc.). It’s found by following a relatively simple math formula. But in the end, it’s still only 2D and flat – there’s no depth, shadows, perspective, or light sourcing.”

After many years since the original 2D Mandelbrot in 1979, the concept to convert the Mandelbrot to a 3D model was picked up. Earlier attempts failed due to computer hardware not being up for the task and errors were breaking up the formula. Daniel White picked up the 3D project in 2007 and among other mathematicians succeeded in creating the Mandelbulb.

Shown here is the current model of the Mandelbulb (full-size): 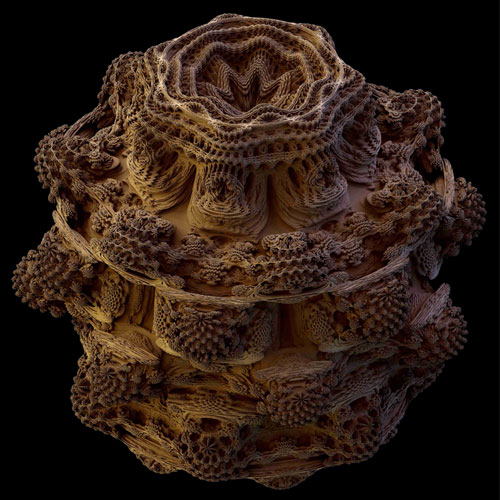 Exploring the Mandelbulb at high zoom in rates with different lighting and color schemes result in incredible images. Also it does have similarities with the original Mandelbrot. 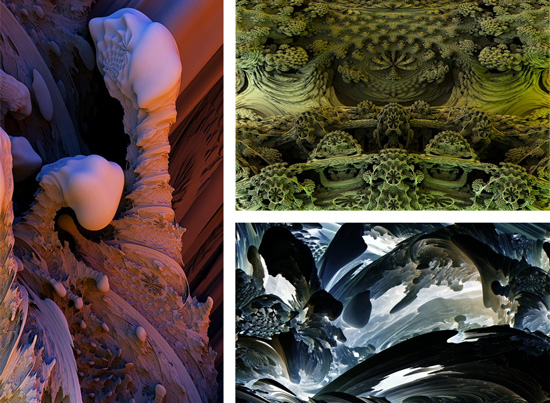 The project still isn’t finished as the current 3D does not capture the full potential which an even better formula could present. But to grasp the current state and possibilities of the bulb is presented by the artist in his Q&A.

Of course a video based on the Mandelbulb, flying through its infinite potential is also possible.

Robert Mallary describes in his Computer Sculpture: Six Levels of Cybernetics (1969) six levels of computer involvement in creating cybernetic sculptures, where the computer is getting more and more autonomous. The Mandelbulb is an interesting example of such a concept. The Mandelbulb, as based on the Mandelbrot, is creating an organic looking sculpture resembling the unlimited enlargement as comparable with that of a solid object and its molecules. The Mandelbulb has a lot of organic looking properties when compared with fractals in nature, especially the romanescu vegetable. The Mandelbulb even surpasses the imagination of the mind, referring to the chaos theory and its unpredictable cascade of detail. I encourage you to view the Mandelbulb website for more in-depth information and astonishing pictures.