ERROR: The Art of the G/itch

With the advent of new technologies come new possibilities and applications that hitherto had been unthinkable. New technologies can also affect existing forms of production and presentation. These changes can lead to the emergence of new styles and ideologies, eventually claiming a space of their own in society. The creative industry is no exception to this.

This mini exhibition has been assembled based on the concept of ‘destructive creativity’. This artistic principle focuses on the unexpected use of technology where preconceptions of aesthetic value are manipulated, twisted and obliterated. Purposefully bending and breaking technology in order to create errors and glitches attacks the set limitations of standardized technology and art, and pushes the observer to think outside the box. ‘Destructive creativity’ is not tied to any specific form or style and incorporates many different media. Visuals, audio, games and code can all be used.

The selected pieces all demonstrate the possibilities of technology when one breaks the established patterns of use. Whether accidental or planned, predetermined or chaotic, ‘destructive creativity’ is about pushing against established borders and not being afraid to cross them. From the founders of bending practices to artists who try to lift glitches to the next level of philosophical thinking, a multi-disciplinary collection has been assembled with one idea firmly in mind: possibility. Terms with a slightly negative connotation are presented here as mind expanding tools, opening up new ways of perception and conceptualization of art. It is our intention to challenge the audience to engage with the art pieces on a different level, blindsiding expectations and stimulating curiosity.

TV Cello is a piece by Nam June Paik that was originally performed in 1971. Paik, considered the first video artist, combined three TV sets to create a hybrid cello and demonstrate the new possibilities of technology. When the cello bow touches the surface of the wire/string it creates a series of electronic sounds while also playing a series of images (these were later replaced by video) and producing electronic signals transmitting to the screens.

Described as ‘chance’ sound, Reed Ghazala’s piece is described as ‘The first insect symphony’ and is performed on Vox Insecta, a circuit-bent insect noise synthesizer. As the father of circuit-bending, Ghazala describes circuit-bending as ‘chance’ music created by the destruction or bending of the electronic components of a device to produce new sounds and possibilities.

Click here for more information on his custom created devices.

The Yellow Mouse Orchestra is comprised of eight circuit-bent electronic Pikachu toys. Using switches and other electronic components, these toys are linked together allowing the user to manipulate the pre-programmed Pikachu noises in different ways. Much like Reed Ghazalla‘s works, this piece is an otherworldly symphony of glitched sounds and bent circuits.

This next piece is by the digital artist stAllio. It is a data-bent picture of Michelangelo’s sculpture representing David. stAllio creates his art with a straightforward and simple tool, namely WordPad. This application is of course not designed to display image files, so all it manages to render is a file full of garbled characters. stAllio opens images in Microsoft’s text editor and proceeds to cut, copy and paste characters. Each change in the characters disrupts the colors and composition of the image, which can still be viewed in any regular image viewer. As the glitched-up image of Michelango‘s David shows, stAllio can make his images glitch in specific ways by manually adding and deleting bytes.

Subliminal Glitch is an animation by Amnon Owed made with Processing. This piece represents glitch art as an aesthetic. This piece was created using Processing functions such as get(), set(), filter(), blend() and tint() and uses them to mimic the aesthetics of the glitch. Technically, this piece does not rely on any actual malfunctioning glitches and its presentation is more similar to styles such as ‘data moshing’ and compression artifact manipulation.

The music video Evident Utensil by the band Chairlift is made using a technique called ‘data moshing.’ The video compression artifacts were purposefully added to create a melting and blending effect full of psychedelic patterns and transitions. The video effect can be considered to be 4D because it appears to bend space and time, moshing together separate physical 3D events into one continuous flow. This effect is not an overlay, but relies on knowledge of the video codec used and deleting and manipulation of individual frames in the video file.

The mainstream music industry is also starting to pick up on this aesthetic technique. Kanye West’s Welcome to Heartbreak video, for example, also uses data moshing.

The artist Venetian Snares, also known as Aaron Funk, is musician mostly active in the generes of breakcore and glitchcore. Venetian Snares composes much of his music using trackers. This is a type of audio sequencing software meant to edit module files; they allow one to arrange notes on a timeline across several monophonic channels. Funk‘s style is highly frenetic and glitchy and likes to label his own music as Surrealism. Szamar Madar combines breakcore with classical music. To ensure everyone understands why this piece was incorporated in a collection of glitch art, please watch the video at least half way through (and be mindful of your speaker volume).

Cory Arcangel is a digital artist whose work provides commentary on technology, culture and how both are interrelated. Some of his best known works are based on hacked Nintendo game cartridges. Each ROM (i.e. read only memory) module contains all the base elements of a game – it’s graphic files and audio – and also the logic that arranges these elements in a meaningful way. By hacking the cartridge and changing the internal logic, Arcangel’s work rearranges the game’s base elements into something else entirely. This piece was created by hacking a Super Mario Bros. 2 cartridge and was originally presented as an installation. The end result is a music video, of a sort, and is accompanied by a style of music that has nowadays evolved into its own genre: 8-bit.

Fallout: New Vegas is the latest game based on the Fallout franchise. The games take place during the aftermath of a catastrophic nuclear war and the player has to take care of him or herself in order to survive in the harsh wastelands. When the game was first released, it was plagued by bugs and glitches. The following scene is the opening of the game where the player character wakes up after being shot. Unfortunately, this surreal and unintended glitch has since been patched. However, if all this can occur during the opening sequence of the game, who knows what other wonders may be hidden away out in the wastes.

Net.art collective Jodi have been active since the mid-1990s. Their works are all attempts at deconstructing their chosen medium and confront the user or viewer with familiar technology taken outside of one’s regular comfort zone. The following piece is based on the video game Max Payne 2. Using the game’s built in cheat codes and the developer command console, Jodi have heavily modified the game turning it into something else entirely. Presented here as a series of web pages, the piece is a collection of heavily disjointed scenes and radically deconstructs the original game to the point where it is barely recognizable. 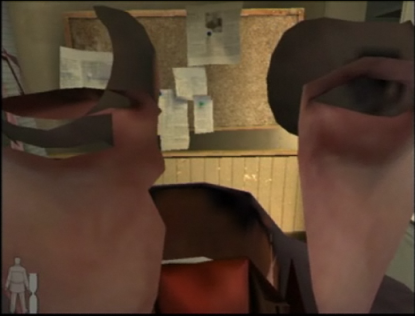 The goal of this mini exhibition was to highlight glitches and errors not as mistakes, but as possibilities. What can be called glitch art today has its roots in early circuit-bending efforts. Nowadays, a lot of software bending goes on using different methods, yet the mindset remains the same. This collection was meant to give an overview of the many approaches to glitch art that exist today. Starting with hardware manipulation and moving on to digital media bending.  From manipulating codecs to creating a ‘bent’ aesthetic using purposefully designed filters and functions. From purely accidental glitches to forced errors that take the chosen medium to an entirely new plane.