Imogen Heap is crowdsourcing your sounds for new album

Imogen Heap, two-time grammy award nominee and known for her innovative online practices to connect with her fans, has just kicked off her fourth studio album with sounds from her fans, called ‘seeds’.

Last year in 2010, Heap engaged with cellists online and auditioned them for her US, European and Australasian tour (see my performance with Imogen here!). Another project in which Heap wrote the film score, called Love The Earth Film received more than 1000 video submissions from 100 different filmakers worldwide. Participation and crowdsourcing has been a way to keep her 1.5million twitter fans (and many more offline) interested and coming back for more.

The first song temporarily called HeapSong1, of the new album (which will take approximately three years to finish in total, with every single being released on completion), has attracted 327 sound snippets uploaded to SoundCloud in which Imogen reviews and comments live through online streaming site Ustream.TV. 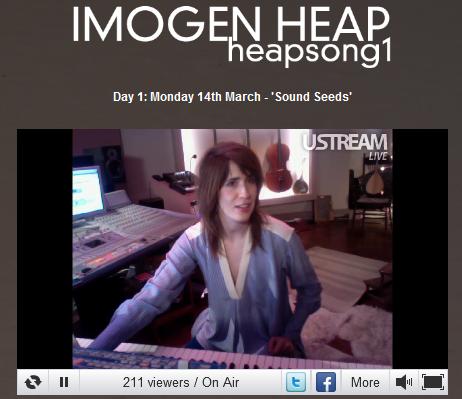 Through the submissions, so far, she has decided for the key of C#minor, and saved sounds of swans, ball on a bat and this track ukulelegranulate.mp3 (below) by rdponto as the key scene-setter for the track.

There is still one more session of live streaming that will take place today, and fourteen more days of composing, reviewing, writing, blogging, chatting before the release of this first track.

New media technology makes this all possible and it is interesting which artists embrace the power of social media. It’s an exciting time for musicians and fans alike. This collaboration, so-called co-creative labour (see the work of Banks & Deuze) through digital means has been instrumental in transforming relationships between artist-fan. Artists like Imogen Heap more easily reach out and connect with fans, and fans have more input and more of a voice than they did previously.

This is a topic I am currently researching for my Master thesis, so please feel free to comment if you have further insights on co-creative labour, participatory cultures and crowdsourcing.

And watch this space (or Imogen Heap’s space http://imogenheap.com) to see how this new adventure unravels.