Can visualization influence people? I mean can we prove it?

This core dilemma pondered at the heart of Enrico Bertini’s latest post on FILWD was incidentally triggered by a question from an audience member at his latest talk on data visualization. The inquiry sought an evidence-based answer from academia concerning assurance on whether research studies exist supporting the claim that data visualization can actually influence decision makers.  Enrico then posited to his readers of whether we know of any such research studies, that show how visualization can influence decision makers. The timing of his blog post —- combined with my ongoing group data visualization project on food and emotion, as well as my thesis-in-progress on data visualization in documentary storytelling —- culminated many thoughts and ideas I’ve been tossing around the last couple of months, which in the end all seem to boil down to various questions of impact; of creating useful visualizations that not only happen to be visually appealing, enjoyable and understandable, but ultimately, ones that dig deep into masses of information, highlight insights, captivate our attention, and finally, empower and energize us enough to do something differently by making better decisions. Like bring about the many societal changes that are often advocated in data insights.  The questions of direct impact also come at a time when Google just released their new Think Quarterly publication, a reflection on the world of accelerating change and why it matters, with the first issue being entirely dedicated to data, making sense of it, and applying it to businesses for enhanced decision making.

Data visualization has officially become the buzz word of the day and all signs point to it being the next mass-medium.

Our insatiable demand for information first led the way to the open data movement, which in turn has been growing transparency and propelling open data to be one of the most transformative trends of our time. Key to open data’s success, however, is information visualization that structures and visualizes statistics to solve problems and answer questions.  As fellow UvA master student, Margarida Fonseca, wrote last year, 2010 was the year that information visualization went public, moving from a term for enthusiasts (and academics) to becoming an interest shared by a broader audience (a range of examples and an overview of the field’s history can be read on her post, too, something I won’t go into). 2011 has strengthened the sentiment and is taking it one step further: from becoming an interest for a broad audience to becoming a necessity that helps us be well informed, shapes our decision making, benefits innovation and generates value. For example, open government data relating to how and which policies are being handled are visualized to empower citizens to hold public service providers accountable (Shadbolt, 2011).

No doubt we have a lot of data present today —- we produce it everyday, turning life into a rich data stream that is too big for our small brains to manage. Val Harian, Google’s Chief Economist, draws analogies to food and points out that food is a kind of data and data is like food. We used to be data poor, now the problem is data obesity (Varian, qtd. in Finn, 2011). But we must not run straight to data dieting. Yes, we are gorging on a surfeit of information, but the fix is the same for data as it is for food —- we need to focus on quality of data samples and choose carefully structured data or “more locally sourced fine dining, then, less all-you-can-eat buffet” (Varian, qtd. in Finn, 2011). The challenge, then, becomes to create a balanced meal of generating meaning that is hidden in the unsorted data — via visualization — and harvest it into clear-cut portions of knowledge that can attempt to serve up society’s needs. Being visual people, the best looking menu these days to structure the numbers, provide intuitive and fast exploration of very large data sources, and tell the story behind the data in an influential way is undoubtedly data visualization (Segel & Heer, 2010). The strengths of data visualization — of discovering relations, reducing complexity by detecting meaningful patters (Reinhard, 2011) and making sense of abstract and seemingly disconnected information in a manageable and approachable way — lend towards its’ ultimate function of helping people deal with change and influence their decisions. But does data visualization that purports to provide insight and influence have the desired affect in the end — on our decision making?

Historically data visualization has been, and continues to be, crucial to decision making in the finance world where stock sales and purchases are determined by scraping gargantuan amounts of live-data and visualization tools become the key to timely monitoring, analysis, and decision making of time critical international financial data. 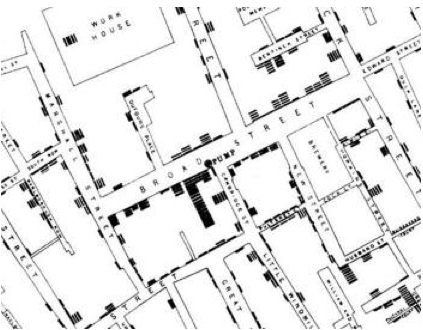 Another solid example of data visualization directly influencing decision making dates back to 1855, when John Snow’s study accurately traced the cholera epidemic to specific locations of contaminated water pump-wells. The visualization became a critical tool to inform, educate, and finally prompt decision makers to shut down those water pumps to save lives.

Similarly, Florence Nightingale‘s famous visualization from 1855, which charted the mortality rates of soliders and revealed the dominant proportion of deaths to be from preventable diseases, persuaded the British government to improve its health care conditions. 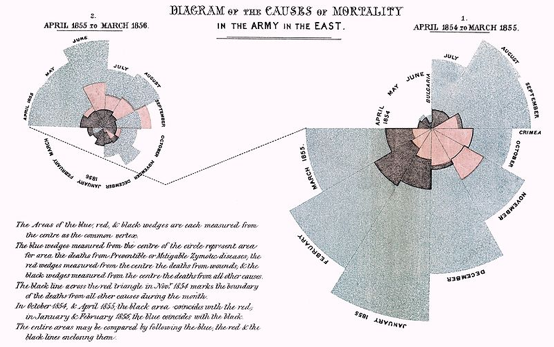 Much literature in the field of data visualization has covered the properties of visual perception to resolve logical problems as well as how visual display of information — by automatically assembling thousands of data objects into pictures, revealing hidden patterns — serve as new methods for amplifying cognition and therefore, a new means for coming to knowledge and insight about the world (Card, et al., 1999). A vast array of decision making research lays out the role of processing symbolic and visual information. Kellen (2005) discusses how imagery and mental scenario rehearsal play a role in decision making. Benn at al. (1994, qtd. in. Kellen, 2005) indicate that imagery shows promise for two key problem-solving and decision-making activities: distinguishing a problem from the symptom and deciding upon and implementing a course of action.

Today it is the business community that is marching forward with sense-making from the data tsunami by utilizing visualization tools that sort high volumes of data into actionable pieces of information that help them achieve set goals. They are implementing and testing out the logic of ‘if, then’: If the visualization of data produces insight, will applying the insights produce change/the desired effect/help us reach our goal?  To navigate the ocean of data out there and communicate more effectively, organizations today seem to agree that high quality visualization of data is useful, necessary and a clear benefit, particularly for those focusing on relaying more real-time data (Varian, qtd. in Finn, 2011).

Visualization challenges that urge designers to create meaning from data also cropping up around every corner, like this one, set up to influence decision making on the problem of information overload for the World Economic Forum’s Global Agenda Councils, or the Childhood Obesity Infographic Challenge in partnership with Let’s Move, that attempts to raise our awareness about the problem and the ways we can work to address it. A host of visualizations aim to affect decision making directly and urge the viewer to make a decision based on the information plotted, perhaps making the visualization seem less as a beautifully designed information piece and more as an urgent call for direct human involvement and change. 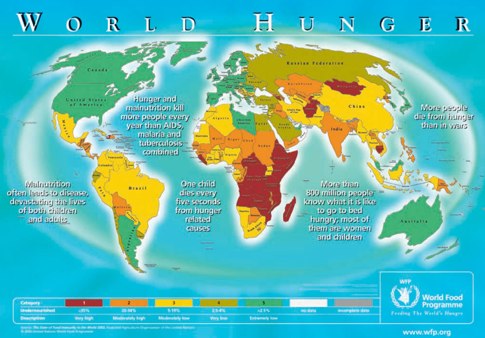 ‘Hunger Map’, produced by the World Food Programme, visualizes hunger data worldwide and calls on viewers ‘be a part of the solution’ so that less women and children will die. 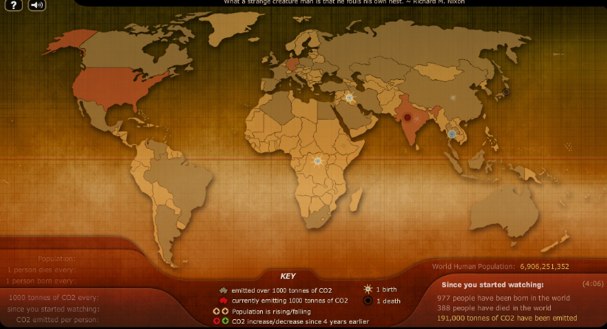 Similarly, in BreathingEarth, the eery visualization that is alive with [breathing] symbols representing CO2, death and birth rates around the world calls on viewers to ‘reduce’ carbon emissions’. 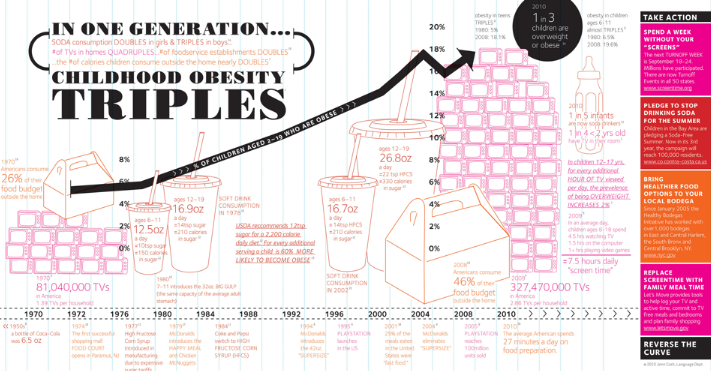 A final example, of childhood obesity visualized calls on viewers to take a clear course of action and ‘reverse the curve’ with a few listed suggestions.

But do these types of visualizations — that chart social (and emotional) issues like obesity, hunger, birth and mortality rates, and CO2 emissions — have enough influence to actually enable the decision-making they intend to? Are these visualizations attempting to make us emotionally identify with the issues at hand so that we are likelier to act? Are there some visualizations that work better than others in shaping opinion and subsequent action?

It is crucial to realize data visualization can also mislead and lie, particularly in determining which data sets are used, what is visualized in comparison to it, and how visually literate the viewer is. The U.S. Food Consumption and Obesity Maps, a tiny example where a very surface-level interpretation reveals some states as healthier than they are in actuality, masks food deserts — small towns in between which are not representative of the given state. Visualizations are meant to provoke transparency, control, and accountability. To avoid misleading evidence and to empower decision making the next required literacy skills will undoubtedly be visual literacy, a subject that deserves its own lengthy post.

Data guru Hans Rosling, in his interview with Ulrike Reinhard, talks about preaching a fact-based view, and emphasizes that what people need isn’t more data but a new mindset. A new storage system that can handle all this information and most importantly, knows what to do with the information once it’s available, and what decisions to make. Hans brilliantly likens data visualization to a great concert:

You need a Mozart or a Chopin to write wonderful music, then you need the instruments, and finally the musicians.

Without the musicians interpreting the data into something that makes sense, the good data source remains meaningless and powerless to enable decision making and social action.

The old saying goes: ‘the proof is in the pudding’. I suppose much of the proof on whether data visualization has a direct effect on decision making will emerge in the next round of food. I mean data.