03/08/2011, 08:20 am – Schiphol airport. Holding a small handbag in one hand and a packet of cinnamon cookies in the other, I was waiting to check in for my flight to Tel Aviv, Israel. From Tel Aviv I would take a shuttle taxi to Haifa, where Wikimania 2011, the annual international conference for the Wikimedia community, would be held.

Sitting at the airport, I still found it hard to believe that my presentation was one of the 100 lectures – out of more than 220 – that were included in the schedule of the conference. Entitled “Small Wikipedias, Great Expectations: Following the campaign for the development of the Greek-language Wikipedia”, my presentation was a report on my experiences, observations and findings as a participant in some of the experiential workshops that were organized across Greece as part of the campaign (for more information on the campaign see here).

Israel is considered by many, including my mom, a “dangerous” destination, especially for a girl traveling alone (that’s my mom again). The Wikimedia committee, however, did not seem to share this opinion. Instead, it selected Haifa, among other bids coming from strong candidates (Montreal, New York City, Toronto), to be the host city of this year’s Wikimania.

The peculiar host city selection soon unleashed a tidal wave of criticism. Several freedom and justice movements demanded a re-consideration of the decision, claiming that “the country’s military occupation of the West Bank and Gaza Strip are certainly not in line with Wikimedia’s mission to promote neutral information”. Some Wikipedians also expressed their opposition openly or saw a moral problem in Wikimedia’s support of Haifa’s candidacy (see here).

Despite the complaints and boycott threats, the Wikimedia Foundation insisted on its first decision; and so did I. I was determined to go to Haifa, because I strongly believe that governments’ decisions are not always accompanied by public acceptance. To me, boycotting an event that promotes collaboration, openness and freedom would result only in excluding ‘people’ and not in punishing ‘governments’.

Nothing could change my mind. Not even the lengthy interrogation by the El Al security official, a young woman with piercing look that screened my eyes to track any sign of nervousness. “Why are you visiting Israel”? “Do you know anyone from the Middle East?”, “Are you carrying weapons in your bag?” were her first questions. But then she started to show genuine interest in my adventure:

Fortunately, 20 minutes later, the security agent let me pass. Telling my story to other participants, I realized that I was one of the lucky ones. Some of them were being interviewed for two hours, others had to leave their laptops at the airport while a woman was asked to strip off and travel with the clothes that the security agents provided for her.

In my next posts, I will attempt to describe one of the most memorable experiences of my life: Wikimania 2011. 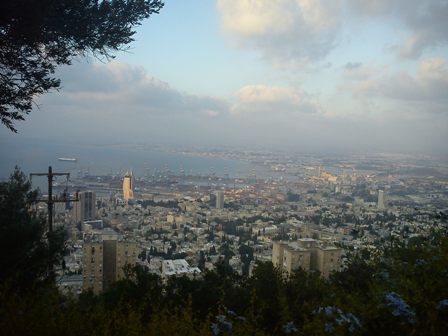