Advertising is everywhere. From print ads in magazines and billboards, pop ups and spam on Internet, or commercials on television, it is virtually impossible not to see advertisements in daily life. Some researchers even say that we see on average 3000 ads per day. Due to the numerous ads people are exposed to, their efficacy seems to be reduced, as people tend to quickly forget traditional ads. Furthermore, many believe that advertisements mainly work on other people : the third person effect .

Advertisements are being covertly implanted in television shows and movies. The main difference between these hidden ads is that they do not appear in an explicit ad context such as television breaks or billboards in the street. These ads appear when & where people do not expect them. Indeed, the advertised product needs to be visible in a scene yet it should not be obvious that it is an advertisement. This type of advertising is called product placement.

Product placement dates back to silent movies such as “The garage (1920)”, however this was still a rare practice. One of the most important example of product placement appeared in the 1982 movie “E.T”, where Elliot is seen leaving a trail of Reese’s on the ground to persuade the extra-terrestrial to follow him. In this case, the new kind of marketing worked well, and Reese’s sold 65% more after collaborating with the movie director Spielberg. Ever since the E.T. product placement case, product placement has been developing quickly in movies, TV, books and video games. 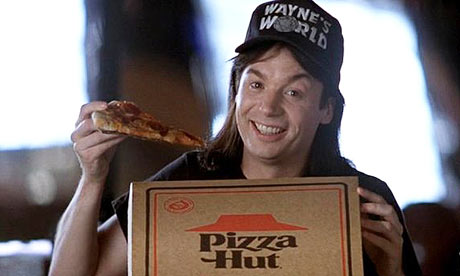 In 2010, Apple products appeared in 30% of the 33 movies that hit #1 at the box office. Nevertheless, the report released by BrandChannel shows that apple’s products appear less and less in #1 movies (50% in 2008, 46% in 2009 and 30% in 2010). This is probably because other brands are competing with apple, and apple has started placing its products in other media such as popular TV shows.

Product placement has become so important in the production of a piece that advertiser have gained enough power to have the original piece changed to better present the product. This is to me a major issue about product placement as directors should be able to use their own creativity instead of being under the influence of advertisers.  Furthermore, product placement is active when viewers are not mentally ready to be shown advertisements. Indeed, one might watch a movie to relax after a long day of work, without having to think about whether a product is good or not.  This type of advertising takes the viewer by surprise, and leaves a subconscious mark in the viewer’s brain. Finally, Product placement takes advantage of the parasocial interaction between the average viewers and the TV stars.

The 2011 documentary “POM Wonderful Presents: The Greatest Movie Ever Sold” was sponsored entirely by the companies it represented. The eye-opening documentary will allow you to understand better the world of product placement.

(I have unfortunately not been paid to write about this documentary).