Why artists (should) support piracy

It makes sense for culture industries copyright protection agencies like the American RIAA and the Dutch BREIN to fight piracy. If they don’t do anything, the industries they represent are going down – sales revenues in the Dutch music industry, for instance, have been cut in half since the start of the millennium, and are still falling. It makes less sense, however, for artists to try and do the same. They once needed the culture industries in order to get their work to their audiences and make money, but now, they might as well leave the sinking ships of the industries and apply new tactics – of which an important one is to embrace piracy.

Ask any artist and chances are pretty high that they feel like pirates are robbing them. More piracy, would mean less money for artists. But aren’t things the other way around? First, copyright in its current shape can also be seen as a means of robbing the public. Second, talking about money, artists can make money giving stuff away. Finally, considering competition within the cultural realm, putting art out there for free might not only be morally right, but also heavily increases an artist’s competitive power.

Copyright is intended to create a balance between the creators of original works and the general public. Creators, or authors, need to be sure they will have the monopoly to sell their works for a limited period – in other words, they need a financial incentive to create anything in the first place. However, creation can be defined as recombining creations of the past into something new. That’s why works of art flow into the public domain after the copyright expires – for everybody to use and reuse.

Unfortunately, culture industry lobbyists have succeeded in completely destroying the balance in favor of the creators – or, more precisely, in favor of the creators’ producers/distributors, commonly dubbed “the industry”, as contracts allow them to take most of the sales revenues. Due to the European 1886 Berne Convention and the combination of the US 1998 Digital Millennium Copyright and Sonny Bono Copyright Extension Acts, and the 1994 WTO administered Trade-Related Aspects of Intellectual Property Rights (TRIPS), most of the world now guarantees copyright for the entire life of the owner plus 50 to 75 years after his/her death (compared to a maximum of 14 years, originally) – and agrees to heavily punish individuals breaking it.

Where did the public domain go? Consequences of the current laws and regulations are striking. For example, the “Happy Birthday to you” song is not in the public domain, but is owned by media conglomeration AOL Time Warner. Published in 1923, it will be copyrighted until at least 2030, meaning that you want to perform it publicly, you technically need permission from a copyrights cashing agency such as Dutch Buma/Stemra.

Of course, this is an extreme example, as not every work of art becomes so generally used. Still, it raises question about ownership in the cultural realm. Again, works of art come into existence by the recombination of works of art from the past. Wouldn’t it be fair to give the future a chance to freely adopt them, too? Especially when it doesn’t cost anything?

Giving stuff away for free doesn’t mean there’s no money being made. The classical example is shaving supplies manufacturer Gilette’s – give away as many razors as you can and wait for the people to buy your razorblades. Two current cultural examples of this model that Anderson named “cross-subsidies” are the average recording and performing music artist in general, and a specific Swedish film in particular. Musicians give away digital records in order to make money on tour. That’s easy – it hardly costs anything. But consider an expensive film production. As Joris Pekel pointed out on this blog in 2010, the production team of the film “Nasty Old People” wrote a plan to convince a bank to finance their 10.000 euro film, put it online 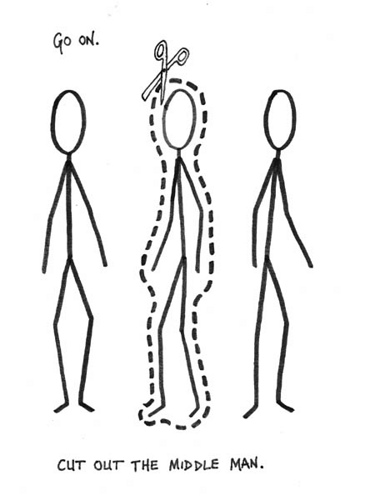 for free using a Creative Commons license, added a PayPal button and waited. Within a year, their loan was payed back, and they had reached a global audience.

Back in the days, artists needed corporations to pay for the production and reproduction of their art products. ICTs and digital producing dramatically lowered production costs and marginalized reproduction costs, meaning that artists are perfectly able to do a lot themselves, and hire only the people they need. This not only means cutting the middle man a traditional industry company is, making art projects cheaper, but also that there are no PR people interfering with the art product itself to make it more sellable. In other words, projects are cheaper, the artist gets to decide everything artistically, and doesn’t have to pay any third party a share of the profit.

Combining these two elements, giving away stuff for free while making money nonetheless, and gaining full artistic and financial freedom through working without the traditional cultural corporations, there are two last reasons emerging why artists (should) support piracy. First, economically speaking, if you give away stuff for free, people are more likely to use your product (or engage in your art, for that matter) than that of a money charging manufacturer, increasing your chance to make money in the end through cross-subsidies. Second, culturally speaking, your creations are based on creations from the past. Giving future creators (prosumers?) permission do the same with your work might be morally better than locking it away for 100 years.