In December 2007, composer and artist and writer Paul D. Miller a.ka. DJ Spooky a.k.a That Subliminal Kid boarded a decommissioned naval ship and traveled to Antarctica. The book that resulted from this journey is The Book of Ice, but the book is not about that journey. 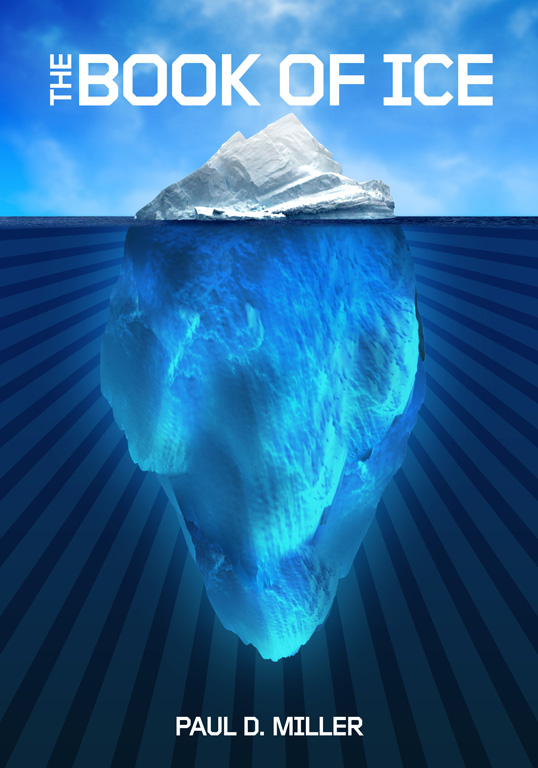 The Book of Ice is part of a greater project; Paul D. Miller’s multimedia performance piece, Terra Nova: Sinfonia Antarctica commissioned by BAM for the 2009 Next Wave Festival; The Hopkins Center/Dartmouth College; UCSB Arts & Lectures; Melbourne International Arts Festival; and the Festival dei 2 Mondi in Spoleto, Italy. That is to say, this project is something of an epic undertaking with many invested parties and an equal number of manifestations. Some of the multimedia components of this project include performances, gallery exhibits, posters, digital video art, and of course -a book. Ice, therefore, is not a standalone work, but rather something reminiscent of liner notes to an album.

The Book of Ice offers insight to Miller’s creative process (‘process’, here, should be defined in the most liberal sense of the word). The DJ’s methodology in Ice is presented as a collection of essays, Q&A’s with Miller paired with a variety of antarctic or musical experts, 2-D graphic and visual works of Miller’s inspired by Antarctica, and other supplemental information about the Terra Nova project.

It is quickly revealed, in The Book of Ice, that the creative process, for this particular DJ, is a mental archiving and constant remixing of scientific and academic knowledge combined with cultural and musical obsessions and references ranging from the obscure to the trivial. This intricate thought process is put to page in a rhythmic flow of words. In Ice, concepts giddily frolic or often leap-frog from one to another. Altogether, Miller’s excitement for topic and subtopic and tangential text provides an adventure in its own right, but as mentioned – the book itself can not be seen as a standalone work- and neither can the content it contains.

The trailer for the Terra Nova Project, including many of the concepts shared in The Book of Ice, and revealing the digital nature the content of the book and multimedia project lends itself too.

In the age of the Internet, it’s hard to imagine fully comprehending (or appreciating) segments of Miller’s writing without considering a more aggressive application of annotating the analog text in The Book of Ice. Miller’s propensity for referencing, alluding and often name-dropping lends itself to digital annotation, or hyperlinked text, beyond what any paper document can offer. In the Introduction to Ice, Miller manages to mention on a single page; the band Foreigner, hip-hop group M.O.P., German astronomer Johannes Kepler, Italian Futurist Luigi Russolo, and of course – Antarctica. He blends the subjects with the skill of a DJ, but in any remix – some samples are familiar to the audience and others are experienced for the first time. In a performance setting, Miller’s idiosyncratic conglomeration of expertise is praiseworthy. Yet, in the context of a book, his sporadic and abbreviated allusions could either be written-off as condescending or serve as fodder for hours of curious Google searching.

For the hypertext-curious; Here is the connection between hair-band Foreigner and hip-hop group M.O.P., a sampled, pitched, and remixed ditty – titled “Cold as Ice.”

In fairness, The Book of Ice does not altogether remain an analog paper document. Scattered throughout the traditional Gutenbergian text and image format are QR codes. The QR codes link to a series of websites which contain hi-res downloads of images and maps from Ice, sound and video sub-projects in the Terra Nova enterprise, and further links and Wikipedia references to several of the scientific and mathematical concepts mentioned in the text. It is a relief to finally see and hear some of the multimedia properties of the project often referenced in the text (before following the QR links – all the written reference to audio and video became stifling). Deeper explanation of the math and science of the text, through the links, assuages previous notions of condescension or fulfills unsated curiosities (depending on how the slight originally registered). Yet, the web content is only marginally related to the analog context surrounding the QR prompt. Decidedly, the QR solution for the limitation of text surrounded by an immense multimedia project is inelegant. Even more clumsy is the digital prompt to return to the book after visiting the QR linked page, sometimes non-existent and sometimes in the form of a cue frame at the end of a video.

Examples of supplementary materials from The Book of Ice QR resources:

(L-R) Map of Antarctica from Ice text, .gif image of “How WolframTones Works” from an Ice QR linked site, Screen grab of directions to refer back to text seen at the end of a video. 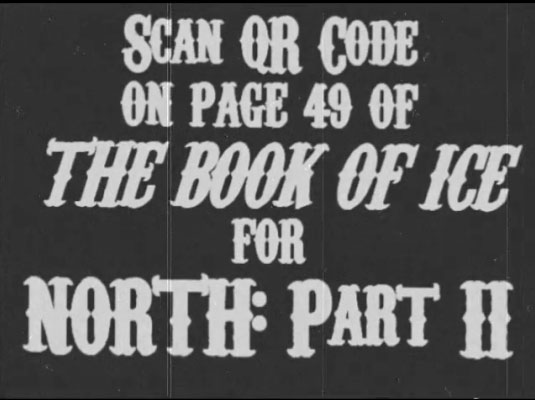 The Book of Ice is not a standalone work, but it is a standalone purchase. The rest of the Terra Nova project remains scattered beyond the bounds of the The Book of Ice pages (web or otherwise). Ice is liner notes without access to the album. Before Paul D. Miller decides to shelve the Terra Nova project, there is room for a more complete iteration. Ice is an pleasant segment providing insight, annotation and supplement of a massive multimedia undertaking. Until a more enhanced and complete iteration is offered, Ice is just a tease.