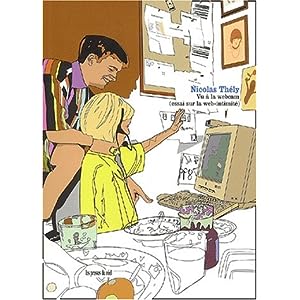 Nicolas Thély published in 2002 his PhD thesis on web intimacy. As he started doing research on webcams, Nicolas Thély was surprised to find so few (if any) specialized literature on the subject of webcams.

The book presents and analyses websites where couples broadcast a webcam image/stream to the World Wide Web.

Nicolas analyses different websites with more or less the same concept: An image is constantly broadcasted from the host’ home. Nicola’s favorite website is Corrie & Rickert’s: www.camathome.com . It is a free website where Corrie leaves the webcam on at home and lets the viewers know what she is doing when is gone from the screen. Corrie lives with her boyfriend but mainly keeps the webcam facing her computer. The other websites that Nicolas analyses have webcams in different rooms such as the bedroom and the shower and are asking for  premium ($) accounts to unlock the pornographic content.

Nicolas Thély describes the relationship between the viewers and the exhibitionists created by those websites. He is fascinated by the drive of viewers to keep on coming back to these websites after all the banality and boring scenes. The sound is not transmitted through the websites as it would take too much bandwidth: the gestures of the protagonist are the only way to understand what is really happening.

In 2000, having a webcam online meant showing a picture every 10-15 seconds. This creates different feelings to the viewer than actual live transmission, as we would have today using programs such as Skype. The moment between a picture and the following one 15 seconds later keep the viewer thinking about the subject.
Nicolas Thély also compares his personal feelings “Live” to the postponed viewing of a recorded stream. He cannot help himself but to think about skipping the boring parts when viewing the recorded images.

One of the main arguments of this book is that we should not think of webcams as mere surveillance systems or silly games between exhibitionists and voyeurs.
A certain relation is created between the viewer and the actor. Indeed, the person on the webcam acts differently in front of the web-cam. Looks are for instance essential when being exposed to the web-public. Even Corrie, who does not put a webcam in her bedroom, leaves many sensual pictures for the anonymous Internet viewers to come back. She does make it clear in one of her posts that she will not show more skin despite the number of emails she received asking her to do so. Why would you want to have a webcam targeting you at home broadcasting to people you don’t know? Nicolas Thély explains that everybody deserves fifteen minutes of fame.

This early webcam phenomenon was taken over by the first reality TV shows, which are now quite common. I personally still have a hard time understanding why one would watch reality TV. Perhaps that “Vu a la web-cam” is too old to explain this current phenomenon.
The websites that Nicolas Thély describes are more experimental than artistic. It seems that they are using their website to show that they are able to create a website (that attracts people). Nicolas however analyses their every movement as if he was doing an ethnography of the three couples. I would have liked to see more scientific explanations as to why people expose their private lives to the Internet. Finally, this book is quite easy to read, has some interesting chapters, however it is a little bit repetitive and already outdated.

Furthermore, public web-cams showing someone’s house 24/7 are rare.  After a quick research on public webcams, it seems that most are showing a landscape or a cityscape. The high demand for webcams has led computer producers to include a webcam & microphone in every laptop screen.

Facebook allows us to share a lot of pictures and information between friends, but it also lets people stalk and be stalked. Isn’t it similar as being filmed constantly?
It is also really easy to install a program on someone’s laptop that can take a sneaky picture using the integrated laptop’s webcam and send it through Internet.Aren’t you bothered by the little dot  on your laptop screen always facing you?