One of my favorite moments of all is when I open my mailbox and find there a letter waiting for me. I don’t mean my emai box, but the traditional letterbox. It’s always full of advertisements and bills which have to be paid but when in-between them there is a postcard or an envelope with my handwritten name on it, smile appears on my face. I’m one of these people who are still writing traditional letters and who are still sending postcards from holidays. Moreover when I was a little girl I collected them and that’s why I was really happy to read Esther’s Milne “Letters, Postcards, Email” book. If there was a fire at my place and I could save just few things for sure that would be letters, photographies and books. That is what my great-grandfather did during the World War II when Russians set fire on his house. The 110 years old book with half-burned cover and handwritten commentaries on the sides of the pages by a jew who was hiding from Germans and who lived with my family is one of the most special things I own.
Letters are telling us stories, things which we would never know if somebody wouldn’t write them down in order to share them with the ones he loved or with whom he had any other special relations. We would never be able to get to know romantic side of Napoleon or Beethoven if it wasn’t for the love letters to their beloved. In her book, Esther Milne interwines quotations from the nineteenth-century correspondency between Benjamin Robert Hayden, English painter and writer and Elizabeth Barrett Browning, English poet. Their relationship was very special because they had never actually met. Today we could compare it to the virtual friendships of people who also had never saw each other in a real life but talk to each other everyday, even threw many years. They can’t meet or simply don’t want to meet is a question I’m asking myself. 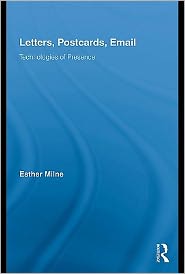 Esther Milne brings us closer to the history of mail, to the history of communicating by letters in nineteenth-century, by postcards beginning from the early twentieth-century and by email, starting at the end of twentieth-century. Milne made me start thinking about things which never came to my mind before, like for how the postal service enable an experience of intimacy, immediacy and presence. What also is interesting is when and why people started to use envelopes and how the images on the postcards developed. The history of stamps, envelopes, postcards and stationery in general is a material for separate book. But what Milne really tries to examine is the persistence of fantasies of presence, without focusing on radical changes in technology and social contexts. Even though the letter-writers are not present to one another while exchanging their correspondency, it doesn’t have an influence on its effectiveness. What Milne is trying to show us is the fact that physical absence may even be the cause of intense intimacy and how it can give the spiritual sense of the other’s presence. The physical absence is letting the reader construe incorporeal body which reworks their interlocutor’s self-presentation.

As we can presume after reading the tittle, the book is divided into three parts. Milne emphasize on how the presence and intimacy are represented and imagined in the correspondence and familiarize us with its technology and communication systems. She focuses on the tension between materiality and presence and the problems of the imaginary corporeal body. She brings us closer to a networked postal community of nineteenth-century letter writers, postcards correspondency of I World War soldiers and a present-day email discussion list.
While reading “Letters, Postcards, Email” I could not stop thinking about the postcards which I saw in Warsaw Rising Museum (1944) in Poland. The wall of one of the rooms is covered with short letters, notes, postcards which people fighting in the uprising (who were not soldiers but normal citizens, often kids), were sending to their families. After the war thousands of messages were left on the walls of totally destroyed city in order to help in looking for the relatives with whom they lost contact. These letters in that museum room are telling much more about what really was going on these days of August 1944 than any documentary. It’s estimated that during only one day in the time of uprising, more than 3700 letters were delivered.

People are naturally nosy and maybe this is the reason why the letters of famous people are always bestsellers. After a big success of “Sex and the City” movie, people started to search for a book “Love Letters of Great Man”, which the main main character, Carrie Bradshaw is reading out loud to her husband. The interest in at this time not yet existing book was so big that publishing house was forced to prepare it. Anyway, the era of love letters is over but era of love email and love sms had started. I remember that first loves at my school started because of texting. Kids were to shy to talk to each other or they didn’t want anybody to know about their feelings so instead of talking, they texted. I remember my best friend who was texting with a boy from her class everyday after school but during the day, when they actually saw each other, they didn’t change a world. It might be absurd but in my opinion it’s a sign of our time. As is the fact that in most of the divorce cases nowadays, as a proof of infidelity text messages and emails are presented. Love SMS texting and love emails took place of love letters and are part of our everyday life. The only risk is, which in case of love letters was much smaller, that we can never be sure who is really writing the message that we are reading and it’s much easier to pretend to be somebody else. It is interesting also how the erotical content of the messages changed the same way as the times. Milne brings an example of a letter from an English author Mary Russell Mitford to Sir William Elford:
“Oh my dear Sir William, what a sad flatterer you are! I blushed from my eyes to my fingers’ ends, neck, ears and elbows included -like-like-do help me to a simile-blushed like beetroot, on reading your dear, charming, fibbing letter.” (2010: 84,)
Todays messages are rather less romantic or rather more literal.

What is fascinating for me is how letters can remain so private and intimate when they are deprived of personal contact. Milne says:

“The absence of “personal contact”, however, does not result in a lack of intimacy. Indeed, a shared sense of immediacy and presence seems to be enabled, in part, by the physical distance between the interlocutors. What we might term “the intimacy of absence” (a necessary disembodied sense of presence) has been identified as a defining feature of epistolary communication (…)” (2010: 55)

To what Milne also pays attention is how the material conditions, both letter-writting and postal service, influence the desires experienced by correspondents. The relation between old and new communication systems is more complex that we could expect.
Letters, postcards and email are part of our culture and are telling us a lot about our forefathers. I would recommend Esther Milne’s book not only to the ones interested in that field of study but also to everybody interested in history of the mankind generally. She explains process which is still gaining in importance and which has still a lot to tell about ourselves.

“It is clear that letters, postcards and email each constrain communication in culturally and technologically specific ways. (…) More specifically, the fantasy of, and desire for, presence is a key element in the exchanges, communications and performances, enabled by three systems. (…) The material systems of letters, postcards and email enable complex exchanges, experienced as the intimate presence of a correspondent whose corporeal body remains invisible.” (2010: 202,)