Book review:Taking Care of Youth and the Generations by Bernard Stiegler

Marketing technologies pose great threat to the future generations – this is the main thesis of French philosopher, Bernard Stiegler‘s book Taking Care of Youth and the Generations. In a work published in English language in 2010, Stiegler begins with discussing the issue of lack of responsibility among the adults in the contemporary society. He reviews a then newly adopted French law, which, according to Stielger, states that juveniles who have committed certain crimes, and juvenile recidivists will be tried as adults and not as minors. The author claims that the change in the law questions the minority status of delinquent children, which “simultaneously means questioning the status of adults as well, finally relieving adults of the very responsibility that gives them their status as adults.”

In another example presented in the first chapter of the book, Stiegler criticises an advertisement campaingn of the French youth TV station Channel Y showing two posters of father and grandfather one with his child and the other with his grandchild and a sign under the posters “our children deserve better than that”. According to Stiegler the two posters “ridicule father and grandfather, denying them all responsibility.” Starting with the Channel Y example, the philosopher elaborates on how modern programming and marketing technologies try to “capture the attention of young minds.” Stiegler further elaborates on “destructive” effects of the psychotechnologies taking control over child’s developing attention. According to the author, it means “letting the culture industry destroy those transitional spaces – and the transitional objects, the first forms of thertiary retentions, that can appear only through them.”

Stiegler points out the issue of the lack of attention, citing the rising statistics of attention 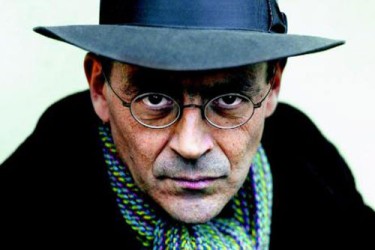 deficit disorders. According to Stiegler about 1/3 of the children in Europe have TV sets in their bedrooms and in the United States, 40 percent of the babies aged from 0 to 3 months “regularly watch television, DVDs, or videos”. “The percentage passes 90 percent in two-year-olds,” the philosopher suggests. “This confirms the results of their [Zimmerman and Dimitri Christakis’s’] 2004 study, which had found that one to three-year-old children’s exposure to television measurably heightened the risk of developing attention deficit disorder before the age of seven.”

Further on Stiegler draws quite an appocalyptic picture of the results of an influence of psychotechnologies on younger generations. He suggests that starting the 20th century the goal of programming industries has been to capture minors’ attention through psychotechnologies. “By the end of the twentieth century under immense pressure from marketing – and in the context of emerging energy crisis the then powerful “conservative revolution” and globalisation as world economic warfare – this partnership had precipitated a set of conflicting forces, attentional deficiencies brought about by psychotechnical attention capture, whose current result is an immsense psychological, affective, cultural, economic, and social disaster and has led to the weakening and increasing fragility of social linkages…”

In his book Stiegler opposes modern media industries with the books and reading culture. As professor Brian Rajski writes on his blog The Voice Imitator, “stripped of its formidable theoretical framework, the argument of Taking Care of Youth and the Generations is rather conventional.” Rajski points out: “Stiegler argues that written culture made possible the maturation of critical intelligence, the development of individuality, and the cohesion of society, whereas contemporary media industries “capture” attention and produce individuals who are merely immature, uncritical consumer types. Adult intelligence and a responsible society therefore need to be fought for through regulation of the media and the protection and transformation of educational institutions.” 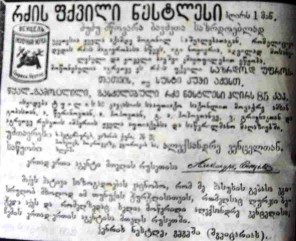 In my opinion, Stiegler is slightly exaggerating when claiming that new media technologies are aimed at destructing the brains of the youth and turning them into inhuman creatures. When talking about influence of new technologies on youngsters, we should not forget that printed books and handscripts for centuries were widely used as tools to impact minors or adults. (Bible and other holy writings for example). We should not forget that even at the very beginning of the development of print media, the papers used to publish various advertisments and it can also be considered as an attempt to grab the attention of the reader.

Peter Gratton of the University of San Diego, who agrees with Stiegler’s disturbance by “invidious marketing” of on internet and gaming cultures to children,  in his review criticises French philosopher’s argument that the modern society is creating a generation of “I-don’t-give-damners.” “Isn’t this complaing the same as it ever was? Newspapers, mass paperbacks, radio, television, the internet, and son on, were all going to turn us into a pack of hedonists incapable of doing anything other than making the next purchace,” Gratton says “Stiegler repeats these age-old attacs almost verbatim, seeming to have missed an entire era of media studies since Marcuse to Adorno were last seen shaking their fists at the “culture industry”. This is not to suggest that Stiegler is incorrect about the pernicious shaping of human desires – marketers who aren’t creating desires, don’t last long. But neither the culture industry, nor its consumers are as homogenous as Stiegler suggests.”

Indeed, this is not the first case when prominent representatives of an older generation in 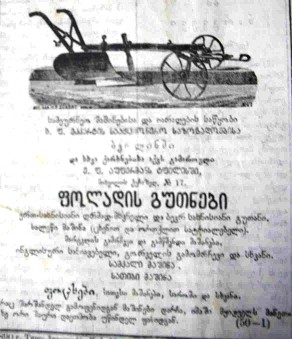 Add of an agriculture device in a 19th century Georgian newspaper

certain society have claimed that the next generation is far more “careless” and “uneducated” than the previous one. A collission between the generations in a 19th-century Georgia, known as an opposition between “Fathers” and “Sons”, is one of the vivid examples to illustrate the situation. “Traditionally by the “The opposition between “Fathers” and “Sons” is meant the dispute launched on the pages of the journal “Tsiskari” (The Dawn) in 1860s and developed between “Sakartvelos Moambe” (“The Georgian Messenger”) in the 1860s. The opposition was qualified in this way by the representatives of the generations themselves in the process of the “Fight” (they refer to their opposition as “fight”). It was provoked by Ilia Chavchavadze’s publication “A Couple of words about the translation of Kozlov’s “The Mad Girl” by Revaz Eristavi” (Chavchavadze 1861: 557-594) but the opposition had fundamental ideological and political foundation.”