Book review: Enfoldment and Infinity by Laura U. Marks

What are the parallels and relations between Islamic art and New Media art? That is the main question Laura U. Marks poses in her book ‘Enfoldment and Infinity. An Islamic Genealogy of New Media Art’. The title of her book is just as alluring and bold as her topic. During the first two chapters her motivation of the title becomes clear. Enfoldment is a term she borrows from quantum physics and Deleuze and infinity is one of the main topics of her book. I will come back to this later.

Basically, Marks’ Islamic genealogy of New Media art is twofold. First there is the metaphorical comparison of history, process and adaptation in concrete Islamic art styles by Western/European artists. Second, there is the interwoven theoretical, philosophical and even spiritual framework existing behind Islamic and Western art. As Marks poses, both Arabic artists and Islamic body of thought highly influenced European and Western culture. This book is important because it reveals how much Islamic culture actually influenced the world and it has the power to make us recognize traces of Islamic culture in

our modern daily lives, thereby making the Western world less alienated from the Eastern. Marks herself notes that

‘we are living in an age of suspicion and animosity between the West and the Muslim world. Now is a good time to discover the Islamic knowledge and history that are the deeply obscured bâtin [or inner truth] of ideas thought to have originated in the West’ (Marks 2010: p. 24).

Iinfinity, Information, Image
Using the work of Deleuze and Guattari, David Böhm Walter Benjamin and many others, including, in line with her plead, Islamic master minds, Marks lays down the theoretical foundation for the argumentation of the book. One of the main (if not the main) theoretical arguments of this book is that objects have a hidden meaning in the sense that they emerged from the infinite, the endless pool of virtual objects which all have the potential to become actual. This intrinsic meaning was generated from its context in time and space and is (re)interpreted by the human subject experiencing it within his or her own timeframe and perceptual abilities. However, we as humans can only get in contact with the infinite through information and image. Here, information acts as a mediator between the imperceptible infinite and the actual image. This concept is further explained through the Arabic terms zâhir and bâtin.

‘Zâhir implies outer forms, a surface, that which is manifest and explicit; this it describes the unfolded planes that I refer to as information and image. Bâtin, by contrast, signifies enfoldedness and the deeper, implicit meanings that may potentially be explicated by someone with the necessary knowledge.’ (p. 15).

The three-ply model of infinite – information – image Marks proposes is in fact a Deleuzian model with the mediator of information added. She deems this step necessary as it ‘draws attention to the nonperceptual forces that intervene in the process of semiosis’ (p. 6). Information unfolds from the infinite, image unfolds from information. The infinite is the intrinsic meaning enfolded in both. After explaining this, Marks notes that in theories of digital media, models of mediating levels between user and network or user and hardware can reach up to seven layers. The layers between the Web and the searching user using Google for instance, according to Bernhard Rieder, has four layers, the web and the user themselves not included. 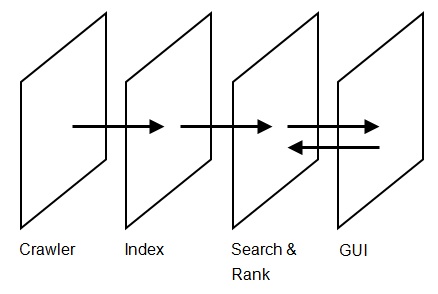 Figure 2.: The four stages between the web and the user using a search engine like Google, by Bernhard Rieder.

On the far left side there is the vast universe of the web. The web is crawled by Google robots and from the results an index is built. The index is where Google stores all of the information about the web. However, users can never access the index directly. Access is only granted to Google itself and obtaining information from the index happens through a process of searching and ranking by Google algorithms reacting to keywords, location, user information, etcetera. This information is presented on the right side: the graphical user interface, which on the far right side the user can perceive. As can be seen in Figure 2, there is a correlation between the algorithms and the user interface. The user can only interact with those two layers. The index and the web itself are invisible. However, it is possible to “meet and lead” Google bots (and thus the ‘crawler layer’) by installing certain plug-ins for the browser, or so I’ve heard.

Comparing the models of Marks and Rieder, one might argue that they are conflicting. Firstly because they pose different numbers of layers and secondly because with Rieder at least two layers are invisible and with Marks only one. Nonetheless, by adding the layer of ‘information’, Marks, in my opinion, covers the area of humanly created objects as well as the new development of the Information Age. In that way, the Web and the Google Index are infinity, the Google crawlers and algorithms are information and the user interface is the image. Whatever the opinion on the similarities between these models, one has to credit Marks for noting that New Media models vary from hers in layers and for seemingly fitting into that category nevertheless.

The second part of Marks’ argumentation concerns finding actual parallels in Islamic art and New Media art. She discusses the similarities of unity (God and code), infinity (spiritual and virtual), the vector (Mecca and telepresence), aniconism (figurative images and virals), abstract line and haptic space (abstract decorating figures and computer art) and embodied perception (subjective experiences in time and space). Also, her discussion of the relation between Islamic atomism, the abstract line as connecting points and the pixel is very intriguing and pursued throughout the book.

Eastern Influence in Western Art
Enfoldment and Infinity gives a very detailed insight into mutual exchange of cultural values between the East and the West. Not only does Marks describe how and why contact was established between the two worlds, she also elaborates on how Islamic influence can be recognized, even if adapted and combined with native art and culture. For example, in chapter three Marks discusses seventeenth century Holland (being a Dutchy, I am familiar with this topic). In those times, Holland was one of the European countries exploring the world by ship, bringing home many exotic items such as Chinese porcelain, Indonesian spices, Oriental metalworks and – of course – Islamic art. Dutch artists mastered the Islamic pattern skills, developing a special interest in Arabic carpets. In a painting by the famous Dutch painter Johannes Vermeer, ‘A Maid Asleep’ dating from 1656-1657, an Islamic carpet is painted in great detail on the foreground. With this painting it becomes only too clear how deep the influence of Islamic culture reached into Dutch art and Western art. 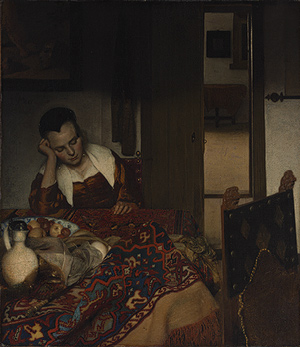 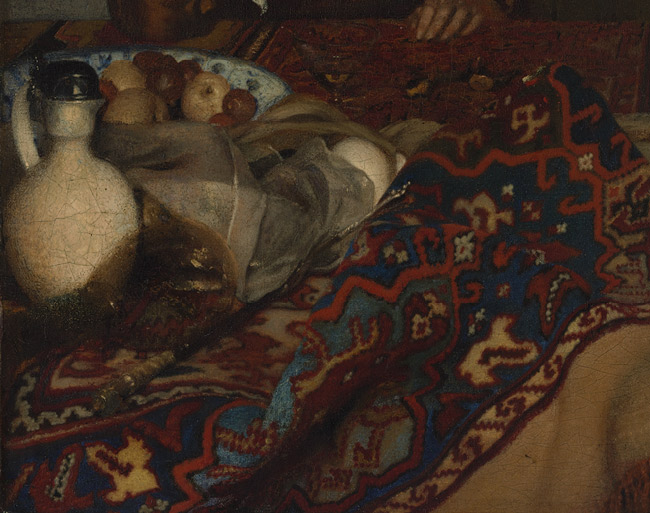 Being submerged in Islamic culture and art, sometimes without even knowing it, it is only logical that the Western culture developing from this foundation would owe (some of) its stylistic traits to Islamic art. I would argue that there is a combination of native and outlandish practice involved here and I think Laura Marks would agree with me. Nevertheless, the importance of this book lies in revealing and highlighting the importance of Islamic culture in our own, serving the noble purpose of reaching out to our Eastern neighbors and enlightening Western people with what was there all along.

“Verdict”
Some points of critique for me include that Marks’ in depth discussion of Islamic art and culture result in less focus on actual New Media art. I would say the Islamic part of the book overrules the new media part. I acknowledge that the Islamic genealogy is the main argumentation of the book, but I think Marks could have postulated more on modern culture instead of mostly discussing historical Eastern and Western culture. At times, I found it hard to see the supposed parallels Marks ‘unfolded’ and sometimes they might be a little far-fetched. What’s more, presenting her argument to the reader directly at times confused me, as when on page 26 she says she is going to exploit ‘unsought-for connections perversely, to behave as if there were a historical continuity where at times there is not (p. 26). The questions this raises with me is firstly why she would “perverse” scholarly methods this way and secondly why she would reveal it to her readers?

All things taken into account, I think this is a fine book which can teach us much about our origins and our ignorance. As said before, it is important to recognize the Eastern culture within our own as a means of better understanding the Islamic world. This counts especially for Holland in my opinion, seating one of the most anti-Islamic political organizations, PVV (Party for Freedom) in the minority government.

Finally, what is also an interesting feature of this book is the complementary website ‘Manners of Unfolding’. Here readers can view interactive artworks companioning several chapters with information, explanation and motivation. I would recommend anyone interested in modern art to take a look on http://www.enfoldment.net/. On the homepage there is a further explanation of the term ‘enfoldment’ accompanied by a sketch. Because what better way is there to familiarize oneself with somebody’s work than by hearing it from the person herself?