According to McLuhan’s ‘medium in the message’ concept, the medium influences how the message is perceived. Besides of light bulbs, this idea functions also in social media that happen to extend relations between not only people, but companies and other subjects of communication and often this is the medium what makes the process more interesting and engaging.

In this research proposal I would like to focus on job recruitment via social media. How do companies try to approach the right candidates? How do firms create their identity online, using informal applications, games and other means of communication in order to attract the future employees, both active and ‘passive candidates’? Does it really pay off? Are social media platforms capable of bringing the right message to a potentially uninterested person and make him or her consider going for a change, even though they were not planning it?

Before I start discussing my research idea, I will first introduce an idea of a passive candidate. Who is it? This term defines as person who is satisfied with their current position at work. They are not actively seeking for new opportunities and job hunting consumes 0% of their time. Most of them don’t even have a resume. But with the recession and the tight financial market of the past few years, companies have realized that they needed to start doing more with less. What they used to do with 10 people, now they’re trying to do with 7 or 8 – and they need to attract and retain the best quality people.

In search of candidates

How to reach them? Forget traditional job boards, newspapers or recruitment agencies – passive candidates are not interested in changing their job. They, however, use social media intensively and this is the perfect medium that helps employers to first find and then to attract the candidates they are looking for. We are seeing organizations becoming more progressive with their recruitment efforts by leveraging networks – social media sites, social networks, employee networks – to bring talent in. They’re sharing jobs through these mediums instead of relying on more traditional sites like job boards.

Why is this happening? According to me, traditional websites with job offers don’t follow changes in technology; they kill both creativity and interaction with user. Nowadays, the way to search network for candidates is ‘recruitment 2.0’: many prestigious corporations and recruitment agencies are increasingly using various social media in their activities, primarily because of the flexibility and broad spectrum of possibilities, as shown in the international study Jobtive: 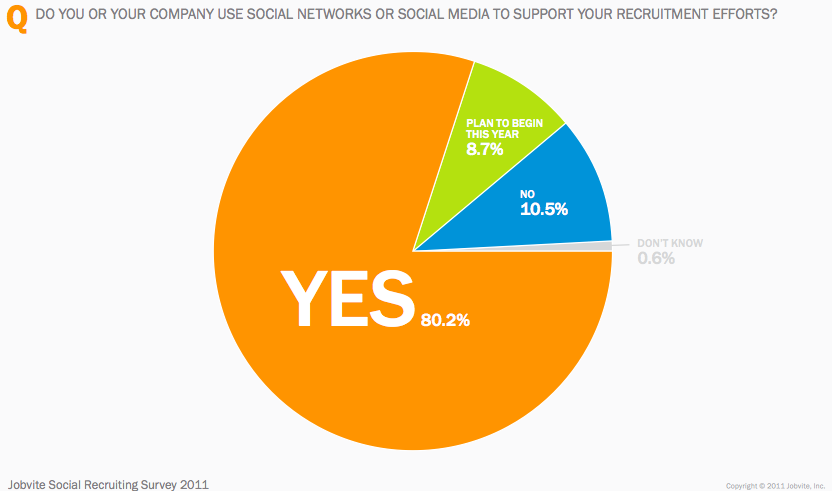 On Facebook, for instance, now there  are full-fledged  applications that create a tab on a company’s Fan page which turns it into a mini-job board. Therefore, using it, people can apply for the job right inside Facebook or like a job and therefore spread it to their friends as a social referral. Recruiters can also create a Facebook ad for any job and target it accordingly.

There are a lot of people talking about job boards falling away, speculation that everything is going shift to a social media environment – and people have been talking about that for a while. As a consequence, employers decide to carry out HR, branding and internal communication activities in social media because of a few key reasons:

There are number of examples of smaller or bigger companies or organisations that re-discover Facebook as a meeting place for their future candidates or employees. Let’s find a few of them.

With as many as 50,000 jobs to fill worldwide by the end of 2011, Marriott International, for instance, created a FB game called “My Marriott Hotel”. It is similar in concept to Farmville and Cityville game: players can create their own restaurant, where they’ll buy equipment and ingredients on a budget, hire and train employees, and serve guests.  They’ll earn points for happy customers and lose points for poor service, before moving on to other areas of hotel operations. Ultimately, they’ll be rewarded when their operation turns a profit.  The game can be played in English, Spanish, French, Arabic and Mandarin.

Another prime example is The British Army that build engagement with young candidates via Facebook. Colin Cook, the British Army’s marketing director, explains in a short interview why the army decided on using social media. 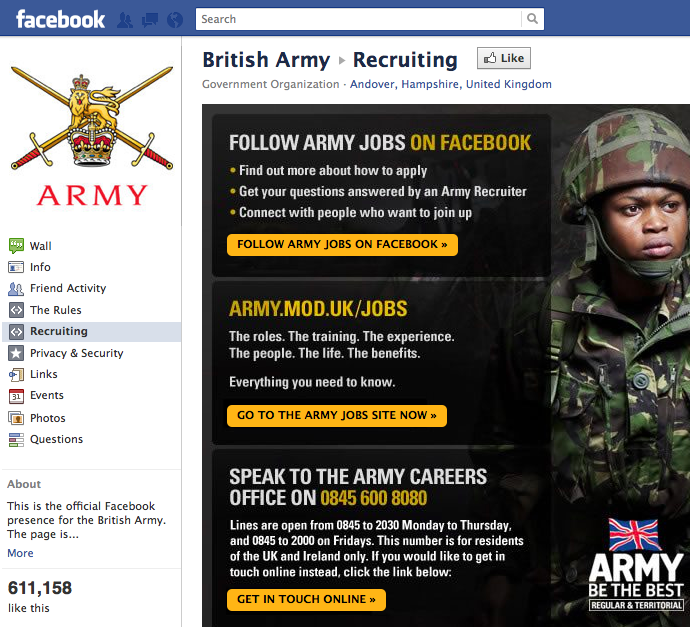 The Army Jobs Facebook page has now over 65,000 followers and represents an active community. The main concept of it is to have existing soldiers communicate with potential graduates, answering any questions or concerns they may have about the army training, job opportunities or anything else. “We are just making sure we keep our eyes on the way consumption is moving,” sais Cook, who mentions also having previously done promotional tie-ups with MTV.

However, applying for job or getting in touch with a possible future employer using social media is very risky. We all know that our profiles are being checked and our online identities are being crefully investigated. In fact, a recent Jobvite survey proves that more than 45% of recuruiters always search for online profiles of the candidates. 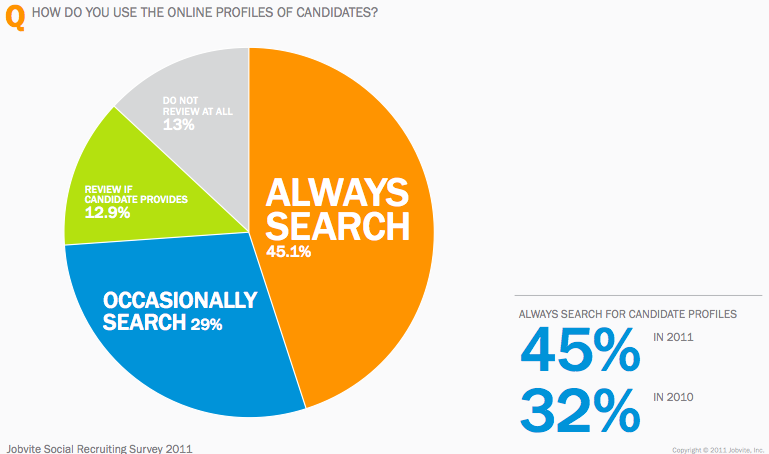 What are they looking for? What are the common mistakes and serious offenses of the candidates? We know that many users of social networking sites often do not apply restrictions on access to their personal data. Then, can we create statistics on how many people are losing job opportunities because of a social network research that they had failed? And while we all hear that social media is a great tool, how do we leverage it – how effective is this method of recruitment?

Some people doubt that a need for recruiting new candidates is the main reason of such campaigns. When I discussed this matter with my colleagues, they often said that by doing so, many organisations might be just looking for higher exposure and more brand awareness at low cost. So is there a hidden agenda?

I would like to investiagte this case by conducting a research about social media recruitment effectiveness. I think that doing an online survey would help bringing new light on social media recruitment and it’s importance. The survey would be completed by individuals responding to an email invitation sent to a registered list of human resources and recruiting professionals. Respondents would answer questions using an online survey tool and the response data would be available on in aggregate form.