The iPhone 4S
In the advent of the “Let’s Talk iPhone” event, people were already looking for tutorials  in order to sync and back up all of the various apps they have gathered from the moment they “went apple,” to ensure a smooth transfer to whatever new product Apple might have to offer. Everyone was of course hoping for the release of the iPhone 5. After months of rumors the day is finally there; the 4th of October. The excitement among apple users is buzzing like their iPhones on vibrant modus. To these enthusiasts Tim Cook is the new apple Santa Claus and Christmas Eve is whenever Apple throws one of these conferences. It is far from undeniable; the mystery and relentless expectation surrounding any Apple press release is popular because of the mystery preceding the event, but all the more because Apple sets trends in motion and raises the standard of the mobile market, time and time again. The possessive crave it forces upon its fans through a brilliant piece of marketing, is at least as interesting as the technological innovations the brand produces.

The Hype
The hype that apple provokes is so effective, that at seven o’clock European time, there are 1.6 million viewers watching three interconnected, nerdy looking guys, talking about the event live on an unofficial apple, three-way-split Ustream. However, due to the huge amount of viewers, the server no longer produced a fluid stream and eventually shut down altogether. Nevertheless, people just kept on watching, as did I, waiting in anxiety, hoping for the release of the iPhone 5. I just left the browser open and became one of the many apple followers who were desperately trying to find a live stream. Five minutes later the three nerds have returned and issued a collective request for a tweet including a live stream link to feed their own live stream. The result: a three layered digital apple vortex that is sucking in every possible means of new & social media in order to report on something projected on a screen by a beamer on the apple premises, adding the additional fourth layer to the apple hyper reality. 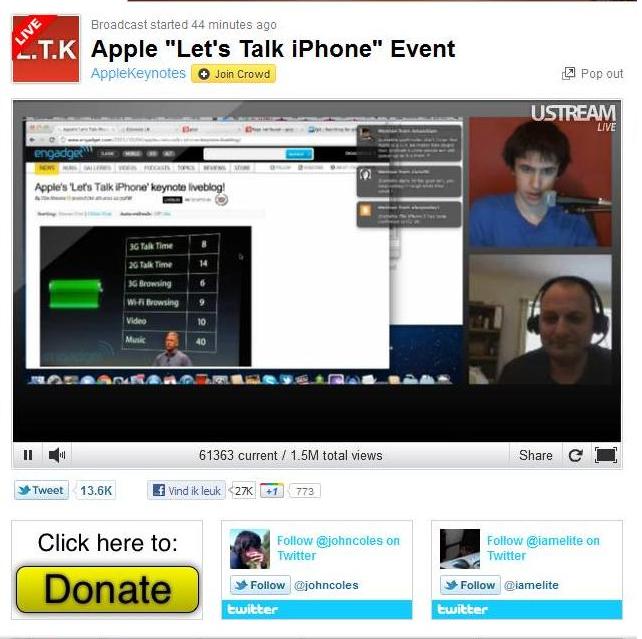 The Stream
The nerds apologized after their broadcasting that they were unable to supply us with a real life stream of the iPhone Talk. Of course Apple would not have given away a live stream. That would contradict their entire trigger marketing strategy, especially because the iPhone 4S did not go through a revolutionary improvement like the 3S. However, apples does want people running to the nearest store to see if the rumors spread through blogs, streams and other multimedia channels are actually true; to experience firsthand if the iPhone 4S is any faster than the regular 4. They will probably bring their own iPhone 4 and compare if possible.

The Monopoly
Two and a half hours after the first slide, Apple has once again showed why it is not only leader in the mobile phone industry, but also the number one  in desktop and notebooks sales, along with mastering the markets of tablets, music players, photo storage and distribution as well as conquering the dominant position among app stores. All hail apple. Apple knows the iPhone is the most popular product on the electronic market right now, so they shamelessly use it to promote their other successes as well, and in exact revenue numbers too.

Apple is certainly not afraid to portray their global economic success. Of course, this revenue emphasis could also be a mere “hush hush” to take all doubts away from stock holders and future investors after the leave of Steve Job due to his health concerns.

The Marketing
Everyone that merely glanced at the production history of the iPhone knew that there would not be an iPhone 5 right away. Similar to the production process of the iPhone 3, they launched an “in between” iPhone, one cleared of all the bugs of the previous one and with some new features. It is what is generally known as… M A R K E T I N G. What is however characteristic of Apple’s attraction, its gravitational pull towards its exclusive Apple stores that actually make you feel like you are on a different planet, is that by now everyone knows that

at first release of any brand new product, there are still a lot of bugs and unwanted glitches in there that can be annoying to some, and excruciating to others. Still, there is no doubt that every Apple presentation will have the same effect: people will rush to the apple stores, leaving partners and children behind, they will ask the bank for a third mortgage if necessary, because there might be an economical crisis going on, you do NOT want to miss out on this piece of electronic heaven. The Apple People
The striking thing about the whole presentation is not so much the launch of a WHITE,  yes people you have read it correctly, an astonishing WHITE 64G ipod, nor of Siri  (a voice command feature) integrated in the coming Iphone 4S with complimentary iOS5 software,  the 8 MP camera,  the new A5 dual core chip, the “Find My Friends” feature, the Airplay mirroring, the improved battery, the dual core processor, the track walks & runs feature, the tabbed browsing, the hallmark card service… No. These are all logical technological developments, leaked, consciously or not, predicted even  and only the Siri BETA version seems refreshing in the line of innovation. It is simply the way in which apple speaks to our imagination, the way it seems to welcome us with open arms to join the apple people, a true, bold, innovative, free and brave people, ready to take on the world as long as they are armed with an apple device. Even though the iPhone 4S does not have a different shape or body, the simple statement made by Cook saying that “Inside it is all new,” makes most hearts beat faster.

The Customization
In addition, what is also greatly appealing to all users, is that many apple consumers believe that they can customize their apple products to match their identity once they bought their apple device, making them part of the renowned Apple people. A Junior sociology major called Ronald Wabomnor’s dedication is all-unveiling: “No phone compares to the iPhone,” Wabomnor praises. “The best feature of this phone is its app store as it allows people to customize their phone to fit their personality […] I think it has the widest app store which gives it

the most options.” Wabomnor is one of the many who believes that by personalizing the apps on their phone, this suits their personality better. This is the most ridiculous thing I have ever heard. You change a color scheme or you casing, you buy Angry birds, and all of a sudden a piece of technology fits your character? Apparently this is indeed how most users feel. Must be an apple thing. In my reality, you can customize any apple device all you want, you are still limited to the boundaries set by the device. We like to think that we have fully personalized it, distinguishing ourselves from others, but we will always be bound to the limits of technology which in turn are set by its developers. This is probably why apple lets developers talk about the latest improvements of the its devices, because they tell you that what they love the most, is working with the apple platform in order to built applications that are designed especially for you.

The Environment
What is striking nonetheless, is that I have never heard any environmental critique uttered in the direction of apple, at least not on my watch of any multi media channels. After a little research I (of course) stumbled upon a greenpeace report, but this report is already highly controversial and greenpeace have even in some way apologized for their report. Quite imaginably, a large corporation like apple must also produce a certain amount of pollution. However this just does not seem to “fit”  the apple image. People are just to subsumed in the apple ideology that their critical vision has become clouded, or better put, blinded but the bright shiny thing it is that apple represents.

The Purchase
Do all the above mentioned socio-economic arguments matter? Not after you have watched this official apple promotional video  of the iPhone 4S, because then… you will be assimilated to the apple people, which actually, is not that bad.

See you the 14th of October in an Apple store near you for the Iphone 4S release. I am the guy cursing and yelling at his Blackberry.