Tumblr: a social network by another name

There is no doubt about the impact of social media in the last years. More than a half of the total Internet users have active profiles in networks like Facebook, Google+ and Diaspora* in the near future, hopefully. What makes these webs important is not the model of communication they try to impose, but the use that individuals make of them. We must not forget that the grandmother of all social media, Friendster, started as an online dating service and only thanks to innovations in the management of their profiles, users became aware of the communicating possibilities of the media.

The first question is precisely; what makes a social network? We are facing a definition problem and therefore we will propose a broad approach to the concept, given that users take part in a hybrid network in which combinations of media are common. Online newspapers like elpais.com imitate microblogging sites (Eskup was created in 2010), audiovisual platforms (Youtube) become TV channels and social media (Facebook) aspire to create the definitive email system through their networks: there is no space -here we should better say ‘time’- for rigid definitions.

People use social media to communicate with friends, but sometimes these media also become means to make new friends and even start -or finish, let’s assume it- affective relations. Social media are useful to express day-to-day sensations and deep, long-thought reflections. Both are frequently expressed through audiovisual media like pictures and videos and shared in circles… sorry Google, this concept is not available to be registered as a trade mark.

All these premises make us look at Tumblr from a different perspective. This is how they describe themselves in their ‘About’ section:

Tumblr lets you effortlessly share anything. Post text, photos, quotes, links, music, and videos, from your browser, phone, desktop, email, or wherever you happen to be. You can customize everything, from colors, to your theme’s HTML.

This definition does not pay too much attention to the social media aspects of Tumblr, although there are many. Some of them are explained in the “Why Tumblr?” section. Users “can create private posts or entire private blogs” and “invite friends, family, or co-workers to view or contribute”, keeping their copyright. It can be easily connected with Facebook, Twitter, Instagram or Picplz, so we may also think of it as a Matryoshka doll, as a sort of ‘content factory’ for other social media.

This double condition is due to the active participation of the Tumblr users’ community. People do not only post about their lives: they can also replicate posts from the users they follow or ‘Like’ them, as it happens in Facebook. Clearly related to the retweet action of Twitter, this reproduction (reblogging) tool has been very effective, even creating a new type of crossed and fragmented narrative that we will discuss later. 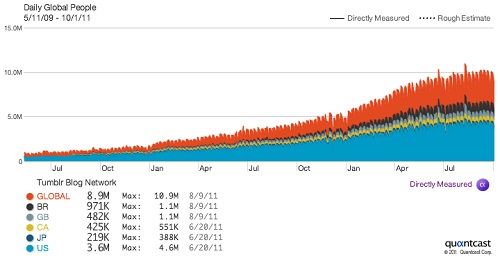 Traffic figures from Quantcast show that Tumblr grew steadily since its conception as an easy-for-all blogging site in 2007 until this year, when it has started to take over the web. It served more pages in a single day in May 2011 than in 31 days in July two years ago. As of September 2011, Tumblr generated now more pageviews than Wikipedia every month with only a tenth of the ‘democratic encyclopedia’ users. In 2009 Tumblr had a retention rate of 85%, compared to the 40% of Twitter. Demographics also show very interesting data: it is frequently visited from home (86% vs 14% at work) and mostly by teens or people in their twenties.

Social networks are the ultimate personality shaper for the 21st-century teens. As Danah Boyd points out in “Why Youth (Heart) Social Network Sites: The Role of Networked Publics in Teenage Social Life” talking about MySpace,

A proﬁle can be seen as a form of digital body where individuals must write themselves into being. Through proﬁles, teens can express silent aspects of their identity for others to see and interpret. They construct these proﬁles for their friends and peers to view. (1)

As it happened with the html code loophole in MySpace, which opened the door to profile customization (2), users of Tumblr can use templates to create original pages. Personalization in Tumblr is not only in the continent, but also in the content itself. The characteristic crossed and fragmented narrative of this media, cited above, is a plausible field of research on its own. Every post is a text whose meaning is related to a bigger text (the author’s tumblelog), but once the post is reblogged (and thus reframed) it obtains new meanings. Beside the semiotic aspects of the ‘Tumblr discourse’, quantitative measures about reblogging activities could be made in order to study social interaction in this kind of hybrid social media.

There is a third aspect related to content that can be considered exclusive of Tumblr. Its users have embraced such an outdated technology as the graphics interchange format and given it a new life. GIFs are seen here as a new visual code that can serve to interact without words, allowing the users to start conversations with their peers without worrying about written languages. These graphics like the one below are worth an individual research, as the possibilities of communication developed by them configure a brand new language system.

*You can follow my own tumblr adventures (basically a collection of random street art pics from different cities) in rincones.tumblr.com.