The Vibe that comes and goes – an app review

In an event of ongoing demonstrations called ‘Occupy Wall Street’, people in the United States are demonstrating against the effects of the latest economic crises, corporate domination and negative capitalist effects in general. The idea of the protests came from Adbusters magazine in mid 2011. After the demonstrations started out on September 17th in New York City, they have since spread all over the country. The name ‘Occupy Wall Street’ can be a bit misleading; the protests are actually taking place in Zuccotti Park (which is still really close to Wall Street, though). Of course, like in every other form of public protest we have seen in the last couple of years, the rallying of and communicating with people has quickly been attributed to social media. According to The Huffington Post, more than 450.000 people so far have joined Occupy Wall Street-pages on Facebook. Twitter traffic concerning the protests have risen sharply, together with the use of the #occupywallstreet and #ows hashtags. Hacker group Anonymous joined in, creating viral video’s and more Twitter havoc. Events like the Arab Spring were great publicity for Facebook and Twitter when some media outlets even claimed social media sparked the revolutions in Tunisia and Egypt. It all sounds like a dream for all aspiring, new social networks that have yet to reach the masses.

One of them is Vibe, a creation by Hazem Sayed and released in the App Store in 2010. It is an application that enables people to send messages, pictures or YouTube videos that are not aimed at someone specifically, but to everybody who uses the app. There are two options available when you send out a message: the duration of availability and the range. For example, if you are in school and you only want your buddies to see your message, you can choose the ‘Whisper’ range and it will only be visible for Vibe-users within 45 metres. After ‘Whisper’  comes ‘Speak’, ‘Shout’, ‘Whistle’, ‘Yell’ and ‘Bellow’, A ‘Yell’ can be seen within 200 kilometres, while a ‘Bellow’ will be shown worldwide. The duration of the message ranges between 15 minutes and ‘Forever’. If you choose a specific time frame, your message will be deleted afterwards. Eqituette on Vibe is specified in the FAQ, but probably controlled by the users: it is possible to ‘flag’ unappropriate messages. A reply-function is also built in, which will be displayed below the original message. A sent out Vibe can also be immediately sent as a Twitter message, if the user chooses to do so.

When testing the distance slider, it seemed to not just show messages from my vicinity (Amsterdam area), but also people from far away trying to connect with Amsterdam locals. I placed the slider on the 10 kilometre range, and found about 20 messages, which shows that the app it not widely used yet. The maximum distance on the slider is 20.000 kilometres, which fortunately showed much more activity. Here, I encountered spam, marriage proposals, pictures of pets and most of all, a lot of content related to the Wall Street protests. One particular bagpipe-owning person seemed to be crazy about Vibe, since his bagpipe would pop up in about every four messages, usually featuring a word for the protesters. 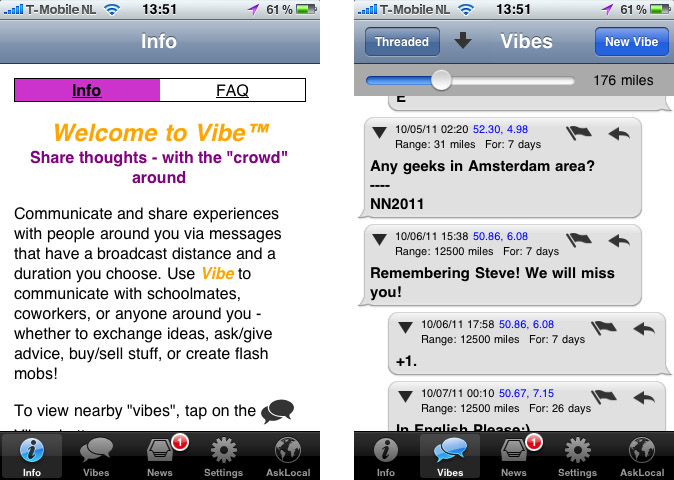 So here we have a messaging system that can erase content after a certain period (say, before the government can find out) and can limit content to certain areas (say, out of reach for the government). It is no surprise then that Vibe has been picked up by the Occupy Wall Street-protesters. Creator Sayed has reacted to the use of Vibe by the New York protesters. After the mass arrests on September 24th, some activists in Zuccotti Park used the application “to vent about what happened, talk about police brutality and arrests.” Sayed stated that he created Vibe as a reaction to the lack of anonymity on the internet and that his core audience would be students, business people at conferences and people at concerts and other events. It seems now that the attributes of his application has attracted a different target.

Vibe requires no registration so anonymity is guaranteed to a certain extent. According to Vibe’s FAQ, “it does not use or transmit your iPhone/iPad ID number (UDID)”. It is interesting to watch the developments on this subject. After the 2011 London riots, British Prime Minister David Cameron called for government access to all messages sent throughout the city. Until this happens, Vibe is an excellent way to keep messages under the radar.