The Switch: from Matthew Fuller to mobile apps

“GRCity311 makes it possible for anyone with an iPhone or Android Smartphone to report pot holes, graffiti, street light problems, and a wide range of other issues from anywhere in the City’s service area. Reports are submitted directly into the City’s Citizen Request Management systems and integrate with the operations work management solutions— giving city workers the information they need to fix the problem quickly. Citizens receive a ticket number allowing them to track progress and receive notice when the reported matter is resolved.”

The proliferation of apps for reporting civic repairs nip at the heels of The Switch, an installation by Jakob Jakobsen taken on as a case study by Matthew Fuller in his text “How This Becomes That” (Media Ecologies: Materialist Energies in Art and Technoculture):

“The Switch is a work by Jakob Jakobsen in which an on/off switch was temporarily introduced into the circuit controlling the streetlighting for one culdesac in the Danish town of Vejle… The adaptation was made by slightly bemused council workers and was accompanied by the distribution of explanatory leaflets to the forty or so houses on the street.” 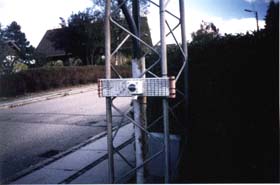 Matthew Fuller flips The Switch, unpacking the this-a-ways and that-a-ways of human and machine, being and becoming, experience and experience. Jakobsen’s on/off switch is small, uncomplicated. And it is from this ubiquity and ease that The Switch derives enormous significance. Slavoj Zizek writes, “The trend in the development of computers is toward their invisibility: the large humming machines with mysterious blinking lights will be more and more replaced by tiny bits fitting imperceptibly into our ‘normal’ environs, enabling it to function more smoothly.” Fuller exposes this “trend” not as such, but rather as outposts in the timeless diaspora of the standard object, relational by definition, a set of agreed-upon constants that signify it within neutral knowledge. Under normal circumstances, “Such knowledge, that attention need not be paid to that aspect of the material culture of the street, allows a user to move along it with his or her attention paid to other things,” (Fuller). However:

“What The Switch achieves is this irruption of potential in a settled technology,” (Fuller). 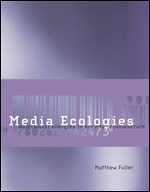 Interestingly, the installation took place in Denmark, where Hans Christian Andersen wrote “The Bottle Neck,” a story that irrupts the media ecology of a standard object by narrating its incarnations, from nuptial champagne flask aboard a hot air balloon to bird feeder the worse for
wear. Are app users contemporary fabulists? Do apps for reporting civic repairs irrupt the potential in settled technologies? “What arises when two or more standard processes, with their own regimes, codes, modes of use and deportment, systems of transduction, and so on, become conjoined?”(Fuller). What happens when standard objects meet the Internet? What happens when streetlamps meet mobile technologies? Do mobile technologies, in fact, take irruption to the scale of eruption?

Humans are indeed part of an expanding cybernetics by which “… particular systems become self-generating, perpetuating themselves by virtue of the critical mass of interrelations they build up,” (Fuller). However, human contribution to the autopoiesis of a system begs reconciliation with claims made by apps toward a “hyperlocal” movement. “As a technology of sight, the streetlight has its own affordances, one of which is the tendency to close down the distance over which you can see,” (Fuller). However, repairing streetlights via mobile apps does not close down the distance between individuals, even those already situated within a local geography.

“Streetlighting systems are ‘addressed’ to certain agencies, to local authorities, town planners, architects, energy companies, those concerned with planning and managing their installation and use. To imagine that they might be addressed at the level of an individual, rather than a population or some other kind of mass whose needs are dealt with in such a way, messes with the scale of interface we expect to have with such systems,” (Fuller).

In messing with the scale of interface, apps broaden the theoretical but not the political ecology of streetlighting systems. Messing with established technologies does not always place upon them new demands. I do not envision mobile apps organizing stargazing sessions in the scheduled absence of streetlight, a consequence of The Switch playfully suggested by Fuller. Messing is perhaps not such a remediation of history as Fuller or even Hans Christian Anderson suggests.

In digital culture, messing results in the standardization of objects and processes. The app is a switch, the Internet a newly standardized object, and individual participation a process rendered as ambient as the glow of a streetlamp. We move from accepting a standard object to accepting a flying object. In essence, apps for reporting civic repairs rely on mobile technologies, the web, and networked culture to identify flying objects. These iFOs are the freewheeling, omnipresent offspring of standard objects and Steve Jobs. While entertaining theoretical exercises, their political clout remains unhinged. Identifying a flying object does not signify a desire to bring it to Earth.

When the smartphone flips the switch:

“The Switch can be said to operate by the switching of address,” (Fuller).

This transfer of power diversifies the ecology of the civic repair in question: graphic designers (and their interfaces), broadband companies (and the broadband width), city financial officers (and the budget) now sign their names with a graffiti tag.

“The Switch is a simple logic gate, an associational device linking this to that, but at the same time it is a thing in itself, a link waiting to happen—a virtuality—or a link in activation,” (Fuller).

Like the switch in The Switch, the app in the application is a viable ecological and independent entity when in motion and at rest. The switch ripens potentially exponential growth of situated practices of witnessing upon which standard objects depend (Fuller). However, unlike witnesses to Fuller’s example of the standard freight container, which could range from steampunk fashionistas to readers of Gertrude Chandler Warner’s The Boxcar Children to the geometry of truckers’ home landscapes, witnessing civic repairs assumes access to a smartphone. (Autocorrect recognizes “smartphone,” a telling assumption in itself.) Emphasis of address switches not so much from central power to individual power as from central power to consumer technology. Communities in the most need of civic repair may not be those socioeconomically equipped to dictate resources via smartphone. An app user is more likely to submit a repair in Coral Gables than the Little Haiti neighborhoods of Miami; the potholes en route to luxury boutiques will shrink, while the O in ghetto will grow progressively larger. Such discrepancy aligns with Hardt and Negri’s prediction of Empire, “… characterized by the close proximity of extremely unequal populations” reinforced by fear (336-7). In a new empirical society, civic repair apps become not about improving a city, but maintaining one’s own place within a city. 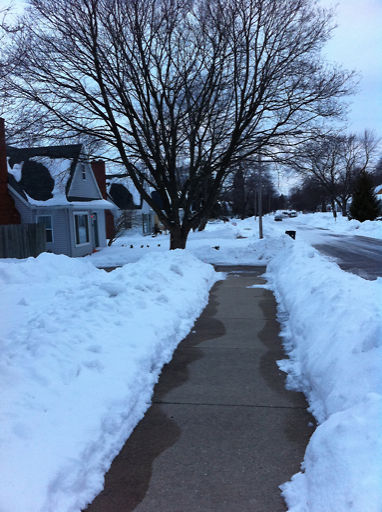 The qualitative assessment of submitted repairs is also worth interrogation. The values of the user, informed by demographics not limited to race, age, and affluence, will also shape the action taken by cities. While cleaning out my grandparents’ house, I came across files of photographs and handwritten documentation of their neighbors’ indiscretions: a tangle of clothes and property lines, inflatable Party Island eye sores, spruce trees in need of sprucing up. I could only assume the evidence was intended for the city’s non-emergency hotline. Woe to their neighbors had my grandparents used a smartphone instead of a Jitterbug! While some apps require users to report repairs within structured categories, other apps facilitate reports ranging from the non-operative parking meter observed by a sharp, rational eye, to complaints of panhandling, geese-feeding, and displaying Christmas decorations past the tactful season. Not all repairs are as straightforward as plugging a pothole with fresh asphalt. The slogan for the app Citizens Connect, “Making Boston More Beautiful,” seems particularly subjective and targets those for whom the contemplation of beauty eclipses utility.

The longevity of apps for reporting civic repairs raises questions regarding infrastructure and sustainability unmoved by the installation of The Switch within a closed community. iPothole, an app for reporting road surface repairs across Canada, encourages monetary investment by citing that, “In 2009, about 700 pothole claims were opened with MPI [Manitoba Public Insurance]. The average pothole claim is about $2,200. A total of $1.5 million was paid out in pothole claims.” Money talks, and speaks well for insurance companies, municipalities, and related agents to support mobile apps like iPothole. However, as Tom Grubisich comments on an interview with Sonar CEO Brett Martin, the success of “hyperlocal” media

“… won’t happen through the present simple process of self-serving— at least not initially. Community sites will have to invest in the software and other tools to make that happen. Most of them won’t be able to afford to do it alone. Will they figure out how to collaborate while staying independent in the ways that matter?” (Martin).

Can an object standardize if its relationalism is broken and rerouted according to personal will? The Street Fight Summit conference aims to answer this question in New York City from October 25-26, 2011 when representatives from civic repair apps like SeeClickFix, social networks like Foursquare, and discount portals like Yipit will meet to discuss sustainable business models in the hyperlocal market.

I raised the subject in conversation with Jeff Grady, founder of Elkhart Lake Multisports, a small business that manages triathlon events across the Midwestern United States. Grady said an app could ensure with timeliness and anonymity that a racecourse is safe for pedestrian traffic. However, whether the interest of an active and diverse user base will thrive, preserving relationalism without direct financial stake, remains to be seen.  There is something to be said for civic chivalry. “Once repaired, you can demonstrate to the public online that you have fixed the pothole,” iPothole writes with a little wink. There is also something to be said for the rewards of democratic process, although voting—especially at the local level—has demonstrated that neither altruism nor egoism contributes enough horsepower to pack polls just because they’re open. Fuller acknowledges:

“There is no inherent process of ‘democratization’ in this othering of technology; what is released is something of an insight into the arrangement of the forces, the programs, that make up the body of this system.”

However, sustainable motives may become obsolete as soon as someone claims Boston’s $25,000 reward for an algorithm enabling its SpeedBump app to automatically detect and report pot holes using mobile computing and GPS. Until then, the switch from Matthew Fuller to mobile apps falls short of civic circuit.