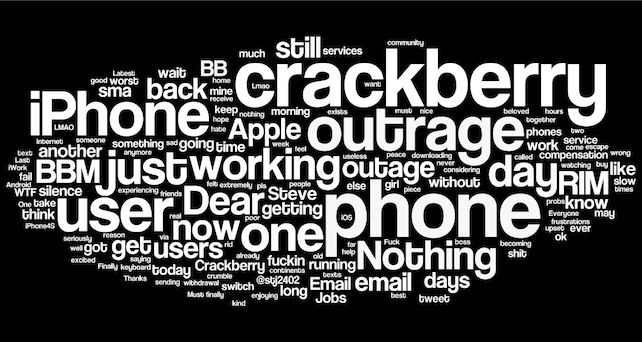 In a fresh testament to how deep our affective relationships are with mobile phones, last week’s Blackberry out(r)age revealed users “breaking up” with their beloved Blackberrys on Twitter. Amongst all the (by now stale) joke tweets about the Blackberry server crash (What did one Blackberry user say to the other? Nothing…) Blackberry users started posting their Dear Johns…
I scraped Twitter for #Blackberry, #Crackberry and #Blackberryoutrage last week (many thanks digitalmethods.net) yielding these gems:

It’s not you, it’s me. #crackberry

I love you #Blackberry – but if you continue to stop me BBM communicating with my sons, we’re so, like, OVER.

Dear my once beloved #Blackberry… I’m thinking of breaking up with you. This is the LAST straw.

I just wanna curl up and die right now #blackberryoutrage

I hate you Blackberry #blackberryoutrage – It’s time to cross over to the bright side…iPhoneee!

#blackberryoutrage wtf am I supposed to do now?? CALL people?!?!!? Get it together #RIM

Mobile phones are our most intimate and cherished technology. The role of our “beloved” Blackberrys is not just in mediating emotion or as objects of affection due to their contents, but as stand-alone affective actors. They are not simply inert objects that only respond to our whims and wants – they too have a presence. They move us in the same way that people can “move” each other – they are energetic participants in our assembly of human and non humans. As a result, users rarely view mobiles as mere technological devices but rather as natural beings, ones that have expressions – derived from the presence they create.
Looking at the word cloud I created for this Twitter fall over the blackout (thanks wordle.net) there is little guessing who people are leaving their Blackberrys for….