Occupy Realism: Or How I Learned to Stop Protesting and Love Protocol.

As you may have realised, the title of this blog post is a parody of Stanley Kubrick’s 1964 film Dr Strangelove Or: How I Learned to Stop Worrying and Love The Bomb. If you’ve seen the film, you know it involves bypassing a networked system, perceived to be perfectly designed, for catastrophic (and hilarious) results. It highlights the use and exploitation of the system to bring about radical social upheaval. What does this have to do with the current ‘Occupy [Insert Place Name Here]’ protests? My point is that the protesters should become realistic in terms of what they can achieve using the methods they are utilizing, but also they can learn from media theory on networks, specifically Galloway and Thacker’s writings on protocol. 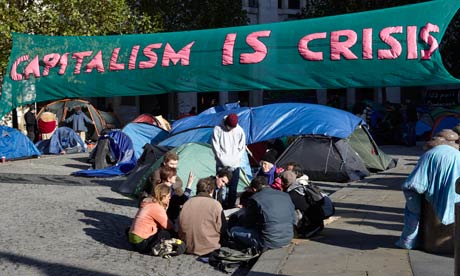 The politics of the Occupy movement are based on a great and desirable idea – the notion of equality – and it seems ludicrous that in an age of capability like ours there even needs to be a protest to highlight this. However, the Occupy movement will not change corporate greed or the capitalist system, at least not in its current form. The movement only serves to highlight inequality, if only for the fleeting moment while the media are interested, but thinking the movement will bring about real change is naïve and wildly optimistic. As we know, politics is much more than good ideas. To quote Dmytri Kleiner in The Telekommunist Manifesto:

Politics is not a battle of ideas; it is a battle of capacities. Ideas are powerful, and their development and implementation can certainly have a political impact; however, the development and implementation of ideas is determined not by their intrinsic value, but by the relative power of those who benefit from the idea versus those who are threatened. The capacity to change a social order requires the werewithal to overcome competing capacities for, amongst other things, communication and lobbying. (2010, p.9)

While Kleiner argues these capacities are essentially economic and related to wealth and production, it is nevertheless pertinent to discuss capacities in terms of networks.

Some commentators are realistic in their expectations. Geert Lovink and Franco Berardi, for instance, claim:

Will our demonstrations and occupations stop the Finazist [financial Nazism] machine? They will not. Resistance will not resist, and our fight will not stop the legal crimes. Let’s be frank, we will not persuade our enemies to end their predatory attacks (‘let’s make even more profit from the next downfall’) for the simple reason that our enemies are not human beings. They are machines. (no pag.)

Following the line of thought that the ‘enemies’ are machines, we can argue that “resistance” should focus on the system as perceived as a network.

On the long running satirical news show Have I Got News For You, British Conservative MP Louise Mensch attacked the protestors for creating one of the longest queues Starbucks has ever seen while simultaneously fighting the capitalist system. Ian Hislop, the editor of Private Eye, batted this over-simplified pseudo argument away by stating ‘you don’t need to go back to the Stone Age to condemn the exploits of modern capitalism.’
As long as the “resistance” continues in this form, this argument will always be present. Capitalism is deeply embedded. It is not just an economic system, it is ingrained in politics and social consciousness (epitomised by the American Dream). It is powerful and can assimilate the arguments into itself and return a critique. How then do you fight a system like that? By using it? To the point of overload?

I have had a kind of idée fixe for a while; a concept I haven’t been able to get out of my head since reading about it – Galloway and Thacker (2004) on protocol. “Put simply, protocols are all the conventional rules and standards that govern relationships within networks” (p.8). Perhaps then there is a way of using the protocols of a system for a new perspective and a new method of protest.

I have placed each use of the term resistance in quotation marks in this post because I think there is a semantic issue with it as an adequate form of social action. Resistance is opposition; two forces coming together. And at the moment the relative power is asymmetrical in favour of the 1%. Indeed, Galloway and Thacker recognise this semantic issue when they say that “counterprotocological theory is not ‘counter’ anything” (p.25). They propose a more suitable term, which is ‘hypertrophy’. In essence, protestors must push the system “into a hypertrophic state, further than it is meant to go” (p.25). Perhaps the best way to describe it is to use the protocols of the system to such an extent that its absurdities, inequalities and weaknesses are emphasised. It is similar to the concept of Culture Jamming in the advertising industry.

Take the transport network as an example (granted, a fairly awkward analogy): If every person got into their cars and headed onto the motorway, they would cause a gridlock. The system would come to a stand still. New ways of achieving ones goals (i.e. getting to their destination) would have to be created.

In theory*, we could apply this theory of protocol and hypertrophy to the Occupy movement in order to change the system. Of course, then there becomes the problem of what to replace with. But that’s an issue for another day.

So to conclude, without an efficient method of actively disrupting the system long enough to create social change, the Occupy movement will not achieve any real change. The dream of creating a world without corporate greed is just that: a dream.

* One is reminded of the quote attributed to Albert Einstein: “In theory, theory and practice are much the same. In practice, they are not.”