In the Western world, cyber cafes are nearing the point of total extinction, but less protected as say, pandas. However, many seem to find a new lease on life in the various developing – soon to take over Total World Domination – countries, where they provide the poor with a marvelous opportunity to surf the infinite waves of the Free World, and perhaps anticipate – behind Great Firewalls – their revenge. There are several interesting examples of social conflict arising from the intra-galactically active, between more traditional cultures and the Sodom & Gomorrah of the Great TwoPoint-O. 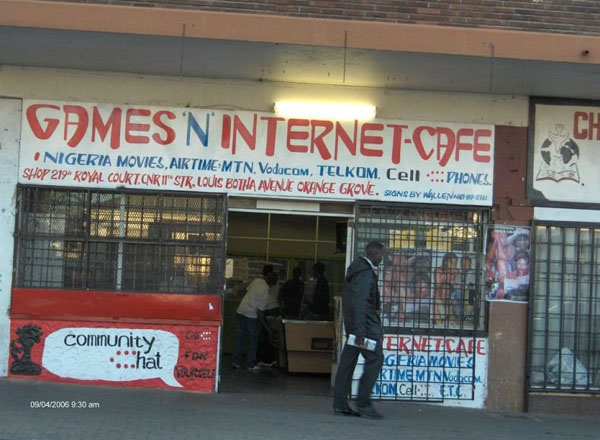 The end of the cyber cafe?

You gotsta love the aesthetics of the cyber cafe. It’s a rather perverse combination of the high-tech and the lo-tech, the sterile and the filthy, the global and the local, The Law and The Improvisation, the insurmountable Anomaly. It follows a Christian logic, it is word meeting flesh: it’s zeros and ones meeting the dirt and the sweat, a nightly rendezvous, it’s Ethernet protocol meeting the sperm and the Bad Breath, it’s tornado’s of dust hitting the ill-equipped CPU fans of computers aged, top of the bill four years ago, worth nothing now. We’re talking megaherz, not gigaherz. It’s through bacteria we fly, into orbit. But in the western world, due to 3G networks, free WiFi and mobile devices, it becomes even harder for internet cafes stay ON-LINE, i.e. in-business. The streets are no longer enriched by neon signs promoting, seducing us into yet another journey into the world of GIF and LOL, or alleviating a force stronger – almost, as that biological detoxification Americano’s call nr. 2 – checking whether that life-changing email has indeed arrived in the form and shape you had already imagined. 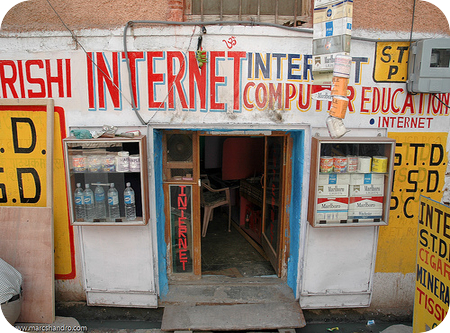 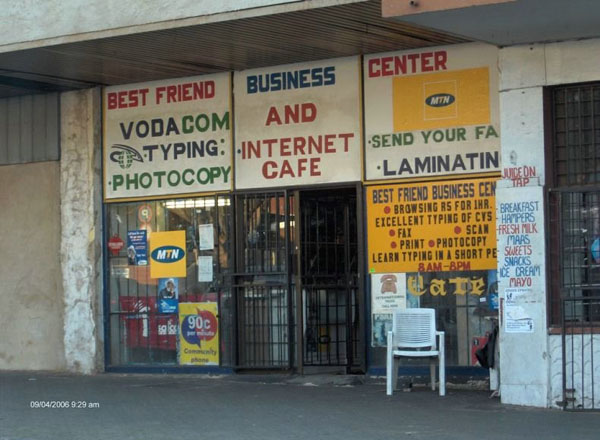 Cyber cafes are often places where it seems the residue of what the city has to offer piles up into postmodern novel-like constellations.

Cyber cafes have always been a meeting point not only of internet users, but of gamers, money launderers, shady back-office businessmen, cheap calls to faraway countries, cold cokes, etc. In the cyber cafe, there is still the possibility of anomaly, of infection, a community of anxious addicts, pushing the load bar with their eyes towards a new fix. A perfect cyber cafe consists of at least one noisy and rusty refrigerator; a bored-looking host which gives you – in the utmost indifference – a card with an hour worth of internet, on which is printed what seems to be a rather unfortunate use of Microsoft Word clipart; some people without conceivable function, hanging around, preconceiving you with dreadful simplicity of animal survival; it’s home-cooked ensemble of computer cubicles that shoot their roots into the ground like bonsai trees; made of wood in different shades of grey, preferably with dangerously sharp corners and nails sticking out; hanging on the wall, a poster depicting a Hindu god, alongside, a poster of Pamela Anderson or B.A. Baracus, which reminds you of childhood television; a blue-lighted electronic flytrap; and then of course there’s the plastic chairs. 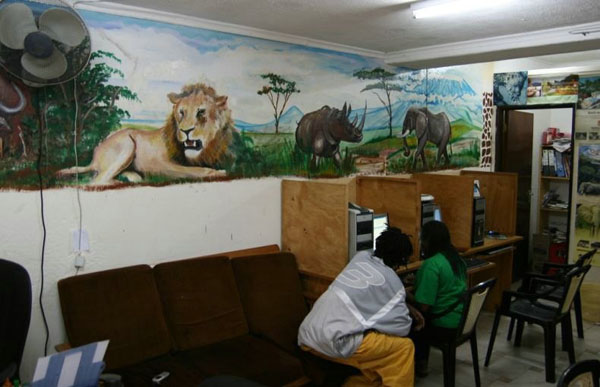 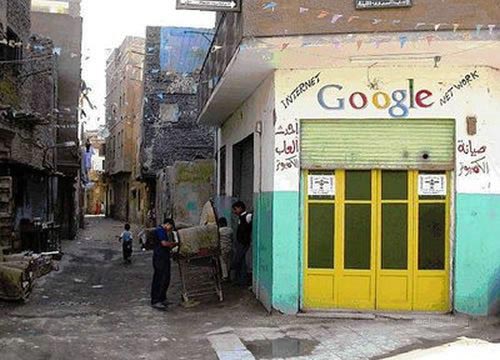 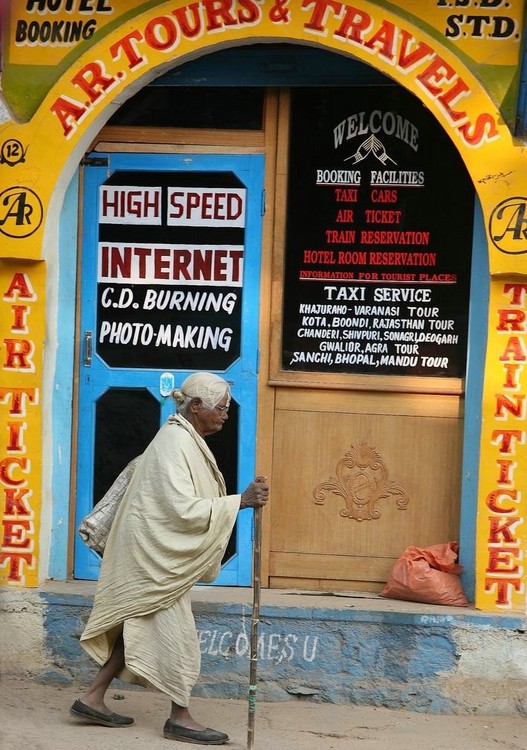 At least until the world is actually drenched in 3G, 4G or nG electric skin, while at the same time large parts of the global population are still unable to acquire a home internet connection, there is a place for cyber cafes. The cyber cafe has found a new lease on life in the ‘developing’ countries, India, South-East Asia, Brazil. But for how long? In India for example:

In India and Pakistan especially, cyber cafes have become object and site of political debate, resulting in strong government regulation. A Cyber Cafes Association of India was even created for this purpose.

Just this year, India’s Ministry of Communications and Information Technology passed a bill regulating cyber cafes. Among the new requirements are: user-identification; log register; cubicles cannot exceed four and a half feet in height; all computer screens must face the commons space of the cyber cafe; and pornography and terrorism filters.

A good example of how new technologies can generate explosive tensions and tragic outcomes in traditional cultures, read the following passage about something which happened in Islamabad, Pakistan:

In a Rawalpindi market, two years ago, someone set up a Net CafÈ; he constructed small cabins, placed computers in them, put a screen door with locks on the inside, installed lights in the ceiling and hidden in the lights, installed cameras. After the grand opening, young men and women started to patronize the establishment. They came alone or as couples, went into the cabins and viewed “dirty” websites on the computers. The owners of the establishment recorded these activities and would later show the movies to the couples and blackmail them for dirty deeds. This carried on until around 25 couples were ensared. A CD was compiled and send to Dubai where it sold for 10 lakh (about $100,000). Copies were made and sold in Britain, US, France and Germany and finally, made their way back home. In the beginning, these CDs were sold for four or five thousand rupees in Lahore and Islamabad. A gang got hold of the CD and tracked down the 25 families of the couples. They delivered the CDs to those houses. This caused an instant firestrom. Three of the girls in the scandal committed suicide. One was killed by her father. Two were divorced . While the boys ran away from their houses. Some of the young men on the CD belonged to very prominent families of Rawalpindi. These houses fell prey to blackmailing from the gang. (source)

The father of one of the girls who committed suicide, is supposed to have said: “Please tell the government to take pity on us and stop the violence permeated in the guise of technology.” This shows also how regulation or even censorship isn’t a priori a ‘bad’ thing, but must be evaluated according to social context. Hmm, Who would have thought that Islam Law and Cyberspace should be such a bad fit?

Upon the ruins of the cyber cafe business and the economic crisis in general, new dreams and old nightmares are built. Due to exorbitant rent prices in Tokyo, lots of – often academically educated – young people find refugee in the small boots of Tokyo’s outer ring cyber cafes, which they can rent for about 10 euro a night – to have at least an tiny bit of privacy. Even William Gibson on LSD wouldn’t be able to conceive it. In about 5 square meters, a desk; a computer with internet; a comfortable chair: cyberspace becomes home. The owners improvise: some offer washing facilities. Since being homeless in Japan is considered a shame, everyone looks the other way.