In her 2010 TED speech Jane McGonigal states that on average we invest 3 billion hours weekly playing online games. Also, Nick Yee (2006, 70) estimates that the MMORPG player spends on average 22 hours a week playing the game. Considering that this player has an average of 26, it can be argued that they have another full-time job playing online games after the actual workday is over. So, as Yee asks, aren’t games becoming more as work platforms? Do games start to resemble more and more actual corporations?
Indeed, the boundaries between work and play, between games and business corporations seem to disappear and real life and game economies conflate. One such example is the feature living economies of MMORPGs that provide rigorously regulated supply-and-demand markets for virtual items that generate real life transactions. The process of gold farming takes advantage of economic inequality and leads to gold farming sweatshops, with possible further other social implications, as Cory Doctorow’s ‚For the win – organize to survive!’ suggests.
To talk about virtual money becoming real money, about glory, gold farming, 75,000 dollars virtual artefacts and how the world of MMORPGs is divided into WoW, EVE and ‘the rest’, we talked with Marian aka Neusa, a Fleet Commander in the MMORPG EVE online. EVE online is a video game by CCP Games, released in 2003 and set in a science fiction space setting that describes a complicated and vast galaxy of moons, planets, stations and wormholes. The game features an open economy that is largely player-driven based on the ISK currency, Interstellar Kredits. An interesting feature of this game, that also sets it apart from other MMORPGs, is that it allows griefing, meaning behaviours like stealing from other players, extorting, and causing other players to be killed by large groups of NPCs.

The interview was done through instant messaging.

MoM: When did you begin playing EVE online?
Marian: I started playing on January 19th, 2006 and I am still playing. 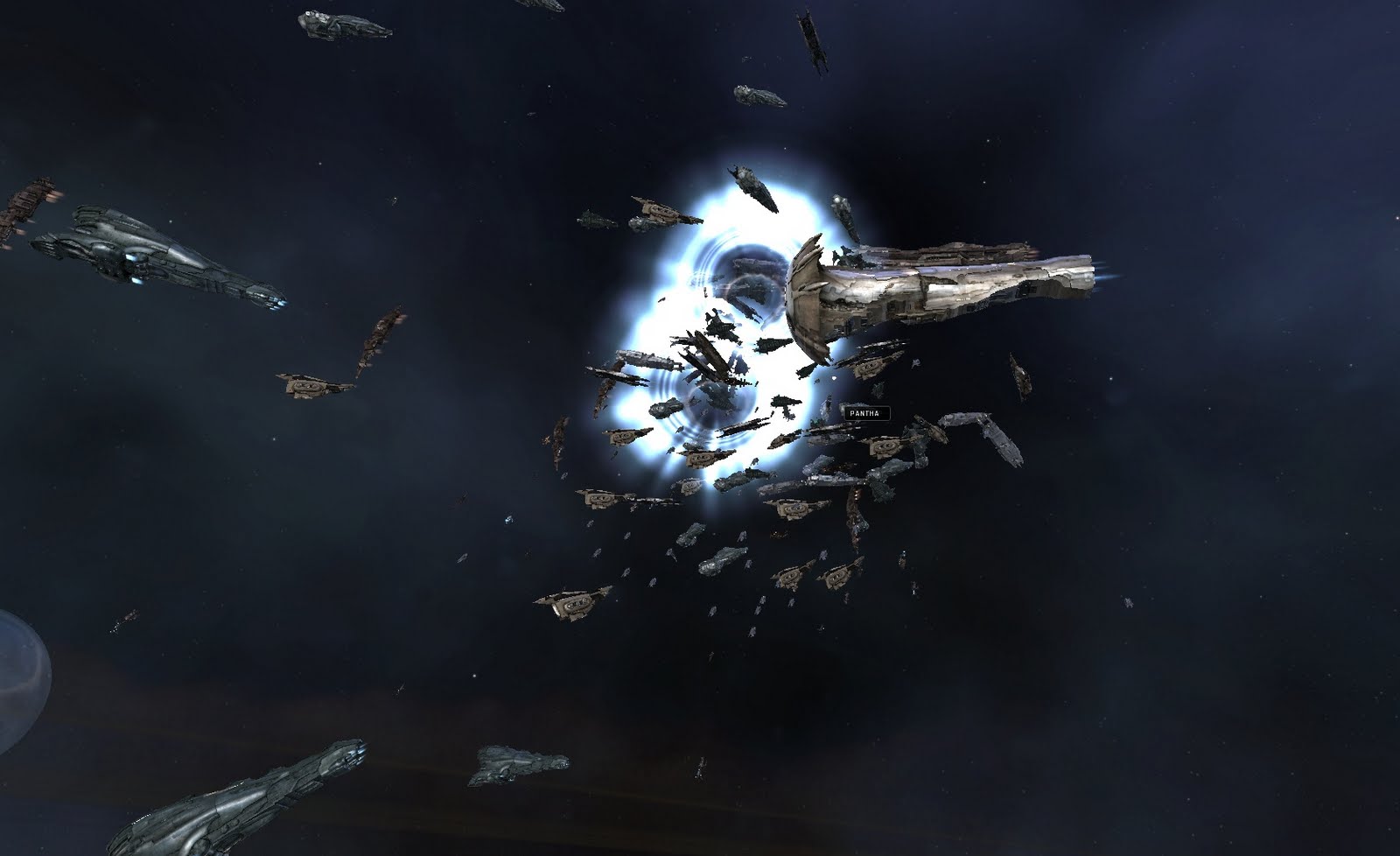 MoM: How many hours do you spend playing? Which was the highest number of hours allocated to game time?
Marian: At first I was playing 8 hours a day. The most: I was connected to the game for 3 days straight. Today I am playing for 4-5 hours a day.

MoM: Can you describe the game’s open economic system? How is it different than that of others MMORPGs?
Marian: EVE offers the possibility to develop commercial activities and trades such as: object for object, object for currency… of course currency being the game’s currency ISK. The name comes from the game’s origin country – Iceland. The economic part of the game was very well developed from the game’s release. There are many differences between EVE and other online games. For example EVE does not address players under 16, being very complex with a player’s average of 30. The difference can be seen in the difficulty level, so you have MMOs that are easy, where your only challenge is to slay NPCs, medium in which you have also a mystery to solve after that in order to gain resources and difficult in which the ways of achieving your goals and obtaining currency are very diverse. It can be done through commerce, invasion of regions, or PVP (Player vs. Player) fighting. EVE offers also the possibility of industrial development, meaning you can build your own spaceships, stations or weapons. So, just like in real life, it is open to so many possibilities and that is what makes it so complex.

MoM: Can you describe the game for us?
Marian: EVE is a Science Fiction MMORPG SF representing a universe divided into regions. The aim is to gain control of as many regions as possible. Regions are divided into constellations and constellations are divided themselves into systems. The border between systems is set through star gates that also help you navigate the entire universe. The universe is divided among 4 NPC races: the Caldari, the Gallente, tha Amarr and the Minmatar.

MoM: What is the player’s role in this Universe?
Marian: At the beginning you are just a pawn in a chess game. Depending on how you develop you can become an elite PVP (scout, mercenary or even fleet commander), an economist (like a real life banker you trade ships and artefacts to gain ISK), a miner (ships and weapons are built with raw materials obtained from asteroid mining) or a manufacturer that builds ships, stations or weapons. You can’t be miner and manufacturer at the same time. I personally like the fighting system and I am a Fleet Commander.
In EVE you can even build a corporation! This corporation can establish alliances with other corporation thus transforming into an Alliance. An Alliance will try through PVP to dominate regions. A corporation can have up to 5000 players, thus an Alliance can even reach 100,000 active players. My biggest battle between my Alliance – IT and a rival one had 3000 people taking part.

MoM: Can you make real money in this type of economy?
Marian: Yes, you can. I know I did. I use to make around 2500 – 3000 euro at every 6 months. I would save a certain amount of virtual money and then I would sell. But EVE’s producers have an agreement, the EULA that prevents the selling of in-game objects or IKS for real money. But there are gamers in Romania that earn as much as 1200 euro a month from doing this. How? They mine or they hunt NPC ships with bounties on their heads. These players use bots (they script their ships to mine or hunt). Every player can have an unlimited number of online characters. So if a character can earn as much as 2b ISK a day (30 euro) there are people that play with 20 characters at a time which means 2b X 20 a day.

MoM: How does this happen, against the EULA?
Marian: The EULA rules state clearly that you are not allowed to sell virtual goods for real money, which is a good rule, the players that do risking to be banned. But, in Romania there is no actual law to prevent this, like in London were such people can get fined or even be incarcerated for such transactions. Players are people with real lives and real jobs, they do not have the time to play enough hours to get that awesome ship and so they use this service offering real cash for virtual ones.

MoM: How do these transactions come to be?
Marian: EVE online is an international game with international players. They meet the sellers in the online world. Usually Romanian players are very vain and like to brag about their status. And so players with real life capital find out and offer 3000 euro for a Titan, for instance. So the poor Romanian sells the ship for 3000 euro. Because in my opinion you have two types of players: those that are in it for the glory and their ego and those that play for real life cash.

MoM: 3000 euro! That is a significant figure…
Marian: That’s nothing. In WoW they sold pixels for 75,000 euro. It’s because of WoW that they came up with the EULA and laws in different states. I’ve heard of American gamers that sold their houses just to have in-game glory. The biggest EVE farmers were in Japan. CCP prevented this by making an exclusive server for them that does not communicate with the rest of the world. This is because at one point the game artefacts became really cheap and that went on to be a crisis for the company. This is because CCP also has a subtle connection with the selling of ISK for real money. How? Easy! They came up with these Game Time Cards that allow you to play online for 30 or 60 days, because EVE is not for free. You have to pay a monthly subscription of 19 euro. Because not everybody can pay 19 euro, GTCs can be purchased with real or in-game money. So players end up exchanging GTCs for virtual money or artefacts. That is what I call money laundering.
I can even tell you that I got banned for one year from EVE. Some people accused me of selling ISK for real money and I got banned, but I was able to prove that I was innocent. And I was accused of that just because other players were jealous.

MoM: Is this still a game for you or a job? Did you ever get tired of playing?
Marian: It is still a game, but for other players it is a real job. There are people that support themselves though playing EVE.
Yes, I used to take actual 2 weeks vacations from playing, but after that I was back to my duties. I wasn’t running from my responsibilities. As Fleet Commander, I have to decide when it is the right moment to attack and to command the army in battle; I have to instruct every soldier what to do and so on. The hardest time for me was when I had to attack on US time zones because I would play the game all day and then I would do battle at night. This is why I reduced to 4 – 5 hours a day.

MoM: What are the most popular MMORPG in the world at the moment?
Marian: 1. WoW 2. EVE 3. The rest doesn’t count!

MoM: Did you make friends among fellow gamers?
Marian: Oh yes, and even people really important in real life: Zoltan Teszari (in the top 10 richest people in Romania), an Interpol employee, a gaming company manager; all real people with important jobs that find a refuge in EVE. We still talk today.