Is your boyfriend cheating on you? There’s an app for that too

With new smart phones and GPS tracking, it’s possible to find and locate the position of other smart phones and the human body that goes with it. But is this legal? Does privacy still exist? Japanese women apparently don’t care about privacy; they just want to know why their boyfriend is late for dinner for the fourth time this month. Luckily there is an app for them now! 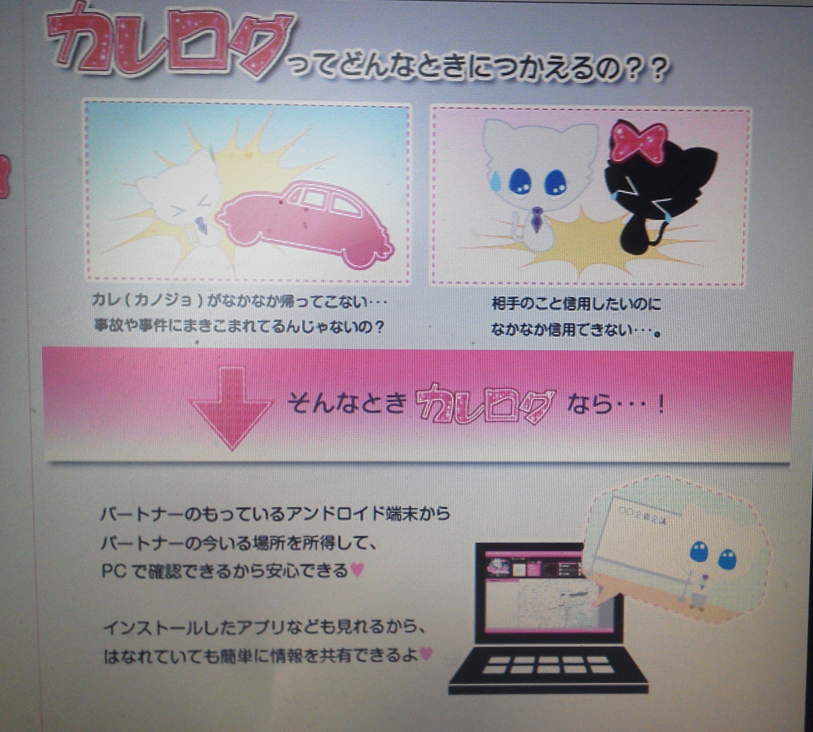 On 30th of august an android app called Kare Log (Boyfriend Log) was launched by a Japanese app developer named Manuscript. This app is allowing the owner of the software to track smartphone GPS data via their PC or smartphone. This app localizes the position of the smartphone, remaining battery life and call history. So if a boyfriend (or girlfriend) were cheating, the phone’s location would reveal his whereabouts, the battery life info would cancel the: “I’m sorry my phone was out of juice excuse” and the information in the call history would instantly reveal the person he or she is seeing.

Obviously the complaints were huge and not only boyfriends were upset but even the Japanese government started asking questions. The biggest party who opposed the app was antivirus software developer McAfee who said: “this app is a potentially unwanted program or PUP, because it acts like spyware and does not show itself clearly on the smartphone. Developer Manuscript updated Kare Log and now it was displayed on the smartphone running the app. In Japan it is legal to track the location of a smartphone as long as an individual sign up for this service. Eventually Manuscript pulled the app and published a public excuse on their website stating:

“We were still a largely unknown company, so I thought that we could grab attention by focusing on anti-cheating programs, but we went too far,” Manuscript’s President Yoshinori Miura said. “I didn’t think we get so much criticism.” 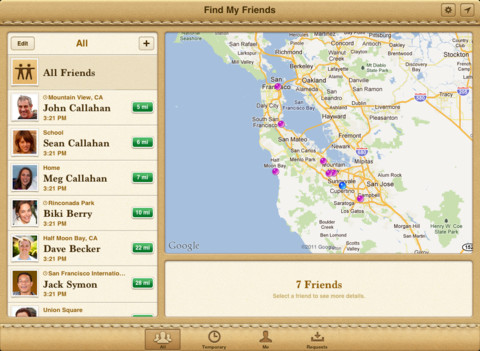 But what about the Find My Friends app released by Apple on the new iOS 5? Find My Friends was announced during the Apple keynote on October 4, 2011.  With Find My Friends, users can follow people and track where their iOS device is. Users can also share their location with the people they choose. Location is determined using GPS and notifications appear when a user requests another user to see where they are. This feature can be turned of or on at any time. Find My Friends synchronizes with other application such as Maps and Contacts.

A few days after the release of Find My Friends a user on MacRumors.com posted an entry on how he turned his wife’s iPhone into a what he calls: spyPhone.

“I got my wife a new 4s and loaded up find my friends without her knowing. She told me she was at her friend’s house in the east village. I’ve had suspicions about her meeting this guy who lives uptown. Lo and behold, Find my Friends has her right there. I just texted her asking where she was and the dumb ***** said she was on 10th Street!! Thank you Apple, thank you App Store, thank you all. These beautiful treasure trove of screen shots going to play well when I meet her at the lawyer’s office in a few weeks. Thankfully, she’s the rich one.”

The problem with these kinds of apps is that supposedly all your friends say yes to your request, because they are your friends and if they would say no they are probably hiding something. Here is an example of how you might use it:

It seems that we are approaching a moment with smart phones that we reached a few years back with computers in general. For years spyware was available to users who wanted to spy on loved ones and friends. Now it’s even closer and not only on our computer but also our smart phones. There are also positive sides to these applications like parental control and when your phone is stolen it’s a tool to get your phone back.

Do we gradually move towards a society of self-surveillance? With millions of people on Facebook feeding companies information about themselves the next step is your location. Facebook already owns the present, with Timeline they want to own the past. Maybe they can own the future as well. With your GPS information in their database it won’t be difficult to find a pattern and thus predicting your next move. Christian Fuchs talks about Surveillance 2.0 on Facebook in his article: New Media, Web 2.0 and surveillance:

It is amazing that location based apps like Kare log and Find My Friends have such an impact on our lives. A video currently making the rounds about a baby so used to playing with iPads, thinks a magazine is “broken”.

This opens up a discussion of how technology transforms us and how this changes our own biological OS. So what about the apps mentioned above? Will these surveillance apps transform how we operate as well? The baby in the video expects a magazine page to be interactive; will we start expecting our friends to be constantly available to us? We almost expect everyone to have a social media account, are we going to expect everyone to volunteer their location at all time to us too? If a friend chooses NOT to be tracked, will we assume they are up to no good? I’m afraid we are more and more turning into a distrusting surveillance society and that can’t be good thing.

Tags: find my friends, kare log, society, surveillance
67 Responses to “Is your boyfriend cheating on you? There’s an app for that too”
« Older Comments
Leave a Reply