A thunderous introduction by Film + Design called ‘Modern Worship’ shows a time-lapse video image of a dancing King of Pop impersonator in full glitterati, refracting the stage-lights in a multitude of sparkles and starbursts, while slo-mo moonwalking across the black nothingness. Cue the airplane. First the nose of the plane cuts through the left cadre of the projection, then through the previously invisible looking-glass in the middle of the frame, the window to the world, shattered, our eyes in a million pieces, only to end in a gravity defying stare-off between the superficial and the hypervisual, every sense of meaning lost in the darkness of space in between. 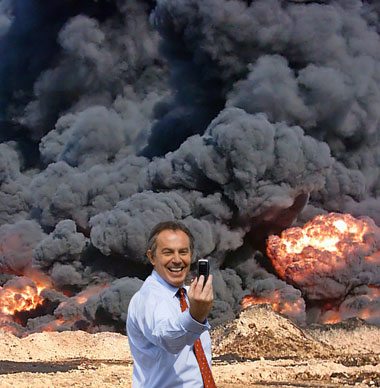 It’s a full house in Paradiso on a Saturday morning in Amsterdam. This annual symposium about the image is organised by Sophie Krier and the Museum of the Image; MOTI, formerly known as the Graphic Design Museum in Breda. After a short opening talk by Mieke Gerritsen (NL), director of MOTI, and an introduction by Tracy Metz (NL/US), the first series of presentations will be about design and the image as social interface, the second series will deal with the image as an interface for art and activism, the mediation of resistance. Together, these presentations provide an inter-disciplinary mix of critical perspectives from the fields of art, design, science, technology and media reflecting on the status of the image in the age of visual obesity.
The first speaker, Paula Antonelli (I/US), presents an overview of the exhibition ‘Talk to Me: Design and the Communication between Objects and People’ at the MOMA NY, summer and fall 2011. An exciting exhibition about pan-communication; from everything to everybody. Antonelli also shares some of her thoughts on the changing role of the curator as a virtual and visual hunter-gatherer. She makes a plea for vulnerable curation; using intuition to find promising directions for a possible future, without prescribing rules, keeping an open ended dialogue with the public. Next is Mark Changizi (US) who presents Vision rEvolution; about the relation between design and biology, natural and cultural selection and bypassing the feedback loops in the black-boxed wetware of the brain by ways of mimicking nature. Koert van Mensvoort (NL) presents Antropomorphobic  Tales; about the fear of products becoming human and humans becoming products. The Uncanny Valley is becoming a part of our daily lives and as such a part of our visual culture.
After the break Matthieu Laurette (FR) gives us our moneys worth with his presentation ’Show Me the Money!’. Unwilling to position himself as an activist, Laurette presents some strong and engaged conceptual art-projects, which he calls ‘Apparations’. I’ve seen some of his work before in SMAK Gent, so even more excited to hear this artist speak. It’s a chronological presentation from 1993 to 2011, starting with a performance on a local TV dating-show, the first work that featured himself as the medium. Sending out notices to curators and collectors about this living-room performance, Laurette essentially hijacked the format of the TV program to present it as his work of art. From this point on it’s a series of conceptual work about the flow of money and media, captured in a mix of performance and experience art, contracts, video-tapes, pictures and installations. Most interesting is the fact that Laurette mostly received acclaim for his work outside the art community. For the project ‘Produits Remboursés’ Laurette collected ‘no good, money back guarantee’ labelled products from supermarkets and displayed them as art objects for the exact same price; and every item must have its own check in order for it to be send back to the reseller and claim back the monetary value. Just following the protocol set out by unknowing hypermarche marketing advisors, with Warholesque tableaux as a consequence. Just imagine the mundane task of buying all this crap and paying for each item seperately. This might be a useless exercise; it’s a wonderful uselessness in the way Laurette presents it. 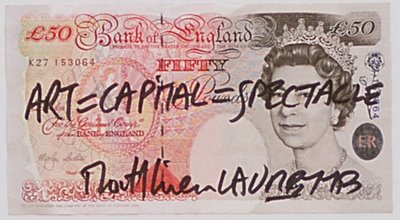 His art shows us the socio-economic functioning of these mediated objects and the ways they mediate us (and vice versa). Laurettes clean concepts indeed remind very much of the social sculpture Joseph Beuys promoted and it’s not surprising some of his works directly reference the teacher aller Künstlers. Laurettes ongoing project ‘Things’ is open to participation, were you can buy nice things from a wish-list of nice things Laurette has compiled, pick to your liking and buy it for Laurette; as a unique work of art you receive a Polaroid-print of the object signed by Laurette. Prices range from 6 to 6000 euros.
Marije Meerman via Skype and Joris Maltha from Catalogtree (NL) present the Backlight/Tegenlicht documentary and the first TouchDoc app for iPad ‘Money and Speed: Inside the Black-Box’, reconstructing the 2008 financial flash crash, bringing new levels of interaction and depth to documentary and data visualizations. Financial experts are interviewed on rotten algorithms and their disastrous automated transactions can be traced back to the millisecond. The data visualizations/animations by Catalogtree are beautiful as well as insightful, however pretty pictures can also distract from the story. Or maybe the multiple screens of data visualizations cut with the interviews were intended to be a bit confusing, reflecting the confusion of the experts? Either as a TouchDoc on the iPad or as old-fashioned documentary, this is another Backlight/Tegenlicht production that is on-the-money, food for thought and pretty scary.
A passionate and short presentation from Erik Kluitenberg (NL); a manifesto for tactical media; the various Arab spring revolutions, where people take tactical media to the streets which become the weapons for resistance, resulting in an excess of mediations, mostly  self-mediations. Less theoretical than Kluitenberg and focused on the journalistic practice is Lex Runderkamp (NL), who talks about changes in the media-landscapes and journalism in general. The presentation by Florian Göttke (NL) shows the fall of the statue of Saddam Hussein and the multitude of mediations of this particular event. A steady stream of images shows the rise and fall of Saddam and the consequent transformations of meaning and value of the images that mediate his life, rise, fall and death. 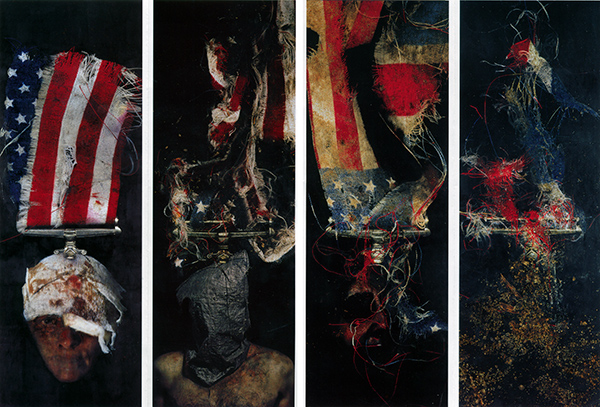 Peter Kennard (UK) presents Visual Resistance and his new book @earth. From the late 1970s on, Kennard has been working with photo-montage. His work provides the public at large with a visual toolbox for social and political resistance. The graphic designs are made to be used and repurposed. Kennards work has been popular worldwide and many street-artists, from Banksy to Shephard Fairey, are in debt to Kennards exacto knife and sharp wit. The book @earth tells a daunting story through sequential montage of images. It is a remarkable piece of work that spans and connects the zeitgeists from the Cold War to the current global crisis, mediated through the montage of cut-and-paste meaning, creating as many ways of seeing as our imagination allows us.
Unfortunately, I had to miss the final Film + Design Interludes as well as the Bas Kosters presentation and the closing words. What the future will hold for the image and its role as an interface is as open ended as any dialogue should be. Images tell powerful stories. As our visual literacy develops, so does our visual culture, to the point of obesity.
Tags: image, MOTI, symposium, visual culture
Leave a Reply