We have experienced a mix of spectacular, timeless and technical sounds, dynamic pictures, relaxing smells and impressive colors. A combination we could hardly imagine before we had visit Sonic Acts. 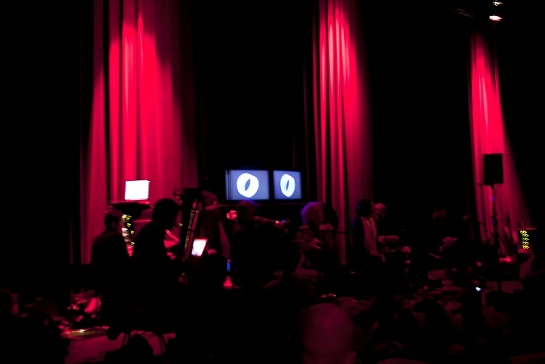 When we arrived at SMART project space we are asked to take off our coat and shoes. By entering the space where the act No Time is taking place we immediately get sucked in to a remarkable ambiance. It is an overwhelming but at the same time not unpleasant combination of deep singing voices, the smell of incense and a dark room where a few red lights are showing silhouettes of people laying down on pillows with their eyes closed. Nobody speaks, only the sound of the singing voices can be heard, and as our eyes are getting used to the dark room, we see that apparently the deep sound is also coming from wind instruments.

As people are used to do this when they entrance a space where a code of behavior is unknown, we are copying the group around us setting ourselves quietly down at one of the pillows. I find myself thinking about the relation to the act and the theme of the festival ‘time travelling’, as I sit down and become more and more comfortable with this place around me. Is this place with all those people caught in the same – unusual and slow – situation one where time is standing still in comparison to the world outside? I have never experienced something like a group meditation but what is happening here seems to be quite comparable.

When we finally walk back to our bikes the intense experience of time and space we just had is even getting clearer. During our trip to the NIMk where we’re going to visit one of the Sonic Acts expositions, the fastness of the traffic is confronting us as we still like being in another time zone where time passes slowly and red lights, sound and nice smells are the only stimuli. Nonetheless we are arriving unharmed at the NIMk a few minutes later. Still in a sort of trance we’re entering the building, curious to what this exposition will bring.

“The exposition at the NIMk exists of installations, sounds- and moving pictures where the main focus lays on different ways to experience time.”

We visit six different chambers. Every room indeed differs from what we saw in the prior room. In most cases the relation with time becomes directly clear. There is one room where a projector is showing us a not-moving airplane in a dessert where only the vibration of the heath is proving that we’re watching a movie instead of a picture. This work of art by Philipp Lachemann is referring to the hijacking of the Boeing in Dubai in 1977 where an airplane stood still for 48 hours. Lachemann makes clear with this work how our experience of time depends on the situation and space of where we in. On the other side of the room a group of ten young men is projected on the wall. These men, who are walking on the street in slow motion, are a great contrast to the movie of the plane. As it is clear that they move much faster in real time, the moving picture of the airplane is in real time but seems to enroll much slower. 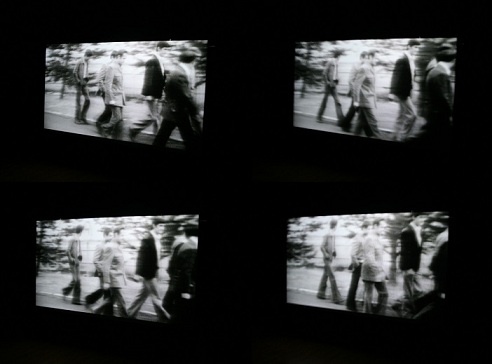 Another work we find very impressive is that of a men who is standing on one and the same place on the North Pole for 24 hours. This movie plays in acceleration which can be seen in the clouds that are moving fast and the changing sunlight. In combination with the (by the artist) composed classic music, played in the additional empty room, we are truly moved by this piece of art.

The last striking experience we have is with Mark Fell’s exceptional Factoid #3 installation. For the first time the relation with time seems less clear. Flashes of light are showing us how the compositions between different objects in the room are constantly changing. After watching this for a while, this continuous change and the irregular flashes of light making us realize how time enrolls during this process, and that the compositions are irrespectively of what remains visible or invisible for the human eye. In a certain way this work seems to apply to the quote where Sonic Acts is this year referring to on the merchandise:

Our experience of Sonic Acts was a great one and we are definitely impressed by the versatility of the acts and events. We can really recommend the exposition in NIMk to everybody who is interested by time, space and technology, cause although Sonic Acts is now ended, this exposition runs till April the 15th ! 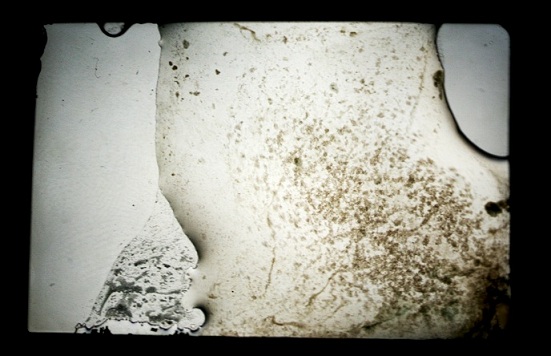