Data Journalism in the Netherlands

Tuesday the 6th of December 2011. Trending topic on Twitter is #nederlandvanboven. Non-Dutch users are confused, what is this hashtag so many people are tweeting about? It is the television documentary Nederland van Boven (the Netherlands from above), inspired on its UK equivalent ‘Britain from Above’, that shows patterns by linking footage filmed from a sky perspective to enormous databases with static data. As Internet journalist Alexander Klöpping puts it in his column: “Nederland van Boven shows in a spectacular way why governments should share more data with the public. If artists, programmers, or in this case television producers can build on these data sources, links and causalities will originate that were not seen at first glance.” 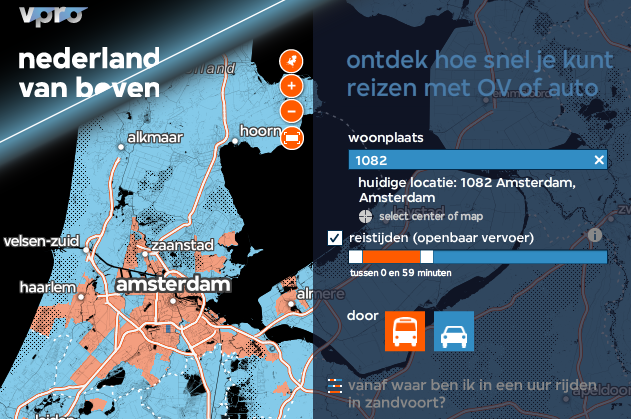 One week later, on Monday the 12th of December 2011, Neelie Kroes, European Commissioner for Digital Agenda, announces that the European Union wants governments to do more in publishing data for the big audience, that can subsequently use this data for all sorts of intentions. Also, data of the European Union itself will be published. The European Commission wants to adjust the statute dating from 2003 in a way that all data, which is paid by taxes, can be re-used for commercial and non-commercial objectives. The general rule has to be that information, except from copyrighted material, can be re-used. This should allow citizens and organizations to utilize data in different ways or for other purposes, e.g. for information on the weather.

The same day as Neelie Kroes announced this huge step for the open data movement, the ‘Evening of the Data Journalism – from scraping data to making stories’ was held in Utrecht. I was there, got introduced to this seemingly new type of journalism and fell in love with the ‘magic’ of it, which is to me exactly about what Klöpping mentioned on his blog: revealing information not seen at first sight, but exposed by visualizing (often different) data sets. For a great introduction to the subject there is the 54 minutes video report ‘Journalism in the Age of Data‘ made by the Visualization group of the Standford University. It is a documentary consisting of eight parts, each clarifying another subset of data journalism. According to Simon Rogers, data journalist of The Guardian, in ten years from now we do not speak about datajournalism anymore. Not because it will have disappeared, on the contrary, it will be so incorporated in the daily tasks and skills of a ‘regular’ journalist that it won’t be anything special or specific anymore. “Datajournalism will be ‘just’ journalism.” As an advantage of data journalism over investigative journalism he mentions that it is way cheaper, because most data is already there and the visualization tools and tutorials are often available  for free. In 2006, computer programmer Adrian Holovaty wrote what we now consider as the ‘manifesto’ of data(base) journalism (Levin). But the idea of proving something, making a story or revealing information by visualization of data dates from way, way back. An example is the ‘Cholera map’, made in 1854, see Marije’s blogpost. The same author of this blogpost is writing her thesis on interactive graphics of the New York Times and the Guardian. Both newspapers are very active on the field of data journalism and information visualization, but how is this the case for Dutch newspapers and others active in the Dutch media landscape?

Obviously, there is ‘trending Twitter topic’ TV program ‘Nederland van Boven’. But there are more players in the field. In June 2011, the data journalism in the Netherlands received an enormous boost. The SvdP (stimulating fund for the press) announced to subsidize four data journalistic projects: Sargasso Verlicht, RTL Nieuws Facts, VolgMijnStem and Wat zeggen ze nou eigenlijk? (Vrieling). Read more about these projects here. One of the speakers at the Evening of the Data Journalism was Jelle Kamsma, first official so-called “fulltime data journalist” of the Netherlands. Kamsma, a former New Media MA student at the University of Amsterdam who wrote his thesis on ‘digital digging’. He worked for about 9 months as a data journalist for news site NU.nl.

All his work can be seen on http://www.nubijlage.nl/nudata/. “Data journalism is about finding the story in data by looking at extremes, trends and relations” (quote from Jelle Kamsma, Avond van de Datajournalistiek 2011). Two simple tools he has used a lot in his work are Google Fusion Tables, especially when working with geographical data, and Google Refine, “a power tool for working with messy data, cleaning it up, transforming it from one format into another, extending it with web services, and linking it to databases”. The last one is especially useful in linking two different data tables together; and thus trying to find possible patterns. Kamsma just recently made the switch over to his new employee RTL News. His successor is Jerry Vermanen, who also has a rich background in data journalism. Vermanen is the founder and project leader of Regiohack, a data journalistic project of the regional newspapers De Stentor and TC Tubantia. To give an idea of his work: together with his colleague Raymond Korse, Vermanen has written an article on housing corporations in the East of the Netherlands. The map below indicates in which municipalities you pay the most to the the board of directors of a public housing corporation, with green being 0-3 euros a month, orange 3-6 euros a month and red 6-9 euros a month (De Stentor). On their website, the map is interactive and dynamic. It is an excellent example on how data journalism works: getting insights and facts through raw data. 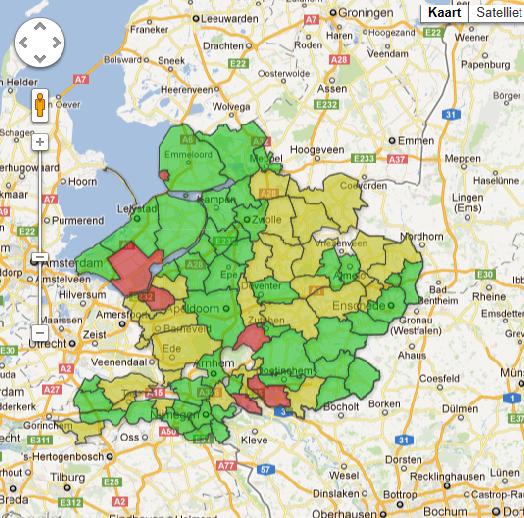 Regiohack is an open community for information specialists in East Holland. Journalists know what they are looking for, can judge and criticize information and have a big network for asking the right questions to. However, most journalists are not very skilled in coding and and the processing of raw online data. Regiohack combines the expertise of journalists to that of Internet specialists, so that both parties can complement and reinforce each other. One of the things Regiohack has organized among others is a 30 hour ‘ hackaton’, in where journalists and programmers worked together on a data journalism project. They found the data and visualized it for telling a story.

Since October 2011, the ANP (the largest news agency in the Netherlands) and news- and opinion weblog Sargasso are working together in making data journalistic productions for ANP-clients (VillaMedia). The two parties also worked together in organizing a hackaton on the financial crisis, trying to answer the question whether it is possible to map the places the crisis has the most impact on by using large data sets and data journalistic methods. The hackaton proved this to be successful. 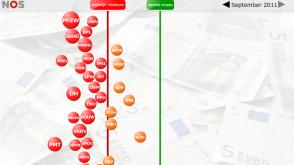 Also the NOS (Netherlands Broadcasting Foundation) want to integrate data journalism in their news procurement. Together with the information specialists of DocuMedia the first steps are made. The information specialists will play a central and connecting role in their data journalistic process. They NOS created a working group that will be engaged in data journalism and visualization, consisting of members of different editorial staffs (Vellenga). An example of an data journalistic article from the NOS is this one: “Pension funds back to square one“. In the visualization, the coverage rates of the 35 largest pension funds from over the past four years processed. The green line is the boundary of the required level, the red line of the legal minimum. The size of the spheres is related to the number of participants in the pension fund. When one clicks on a pensions fund, charts and other facts of this pension fund will appear.

There is already a lot going on in the field of data journalism in the Netherlands. And the future looks bright. In September 2011 the University of Tilburg started a Master’s program in data journalism. In less than half a year from now, the first students will have graduated and probably made their first steps on to the Dutch media landscape.