One topic which has fascinated me for a considerable period of time is the coexistence of the multiple facets of the online and the offline universes: is the digital identity distinct from what is commonly understood as the physical identity? Do they intersect each other and, if so, to which extent? Do virtual and material spaces maintain a complementary or an adversarial relation? 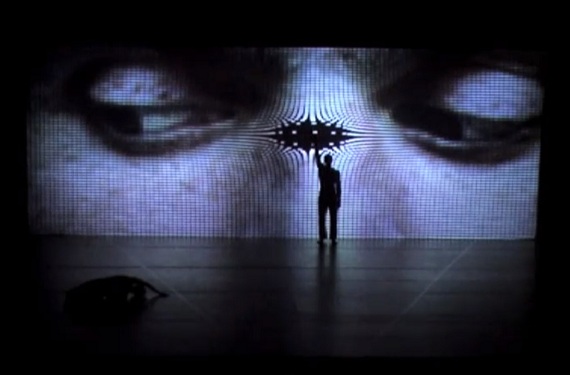 Our daily life is populated by digital fragments: it’s the ubiquitous computing phenomenon which we are only occasionally fully conscious of. The technology is frequently interpreted not as an end in itself but as a means to facilitate social interaction and physical action.

Despite the several points of contact, it still seems almost a metaphysical concept: the one in which both worlds would truly merge originating a new and distinct reality. It is within this particular context that I would like to introduce the topic of real time digital interaction in contemporary dance.

Watching contemporary dance performances which blend traditionally choreographed movements with new multimedia elements produced in real time in an interactive fashion is like witnessing a palpable metaphor of human society in the 21st century as it unveils questions about its potential future.

This was actually one of the topics of an exhibition co-presented by The Dance Center of Columbia College and the Ellen Stone Belic Institute for the Study of Women and Gender in the Arts and Media in Chicago in 2010 under the theme: “The Arcade / Digital Incarnate: The Body, Identity, and Interactive Media” addressing “notions of identity dissolve and emerge in algorithmic and projected forms” in the advent of interactive technologies.

It might seem that I am merely projecting philosophical questions into the realm of one specific performance art, but I would rather look at this phenomenon as an example of digital interactivity profoundly altering an existing form of communication and, in this specific example, modifying the classical notion of contemporary dance as the audience’s attention shifts its main focus from the human figure to a hybrid presence on stage.

Technology is no longer a foreground feature with an auxiliary function but a relevant and active constituent of the performance alongside the human element. The result can be visually striking but, in this case, I should warn that there is more than just… what meets the eye.

One celebrated project in this specific area, and personally one of my favorites, is “Apparition” (2004) from Klaus Obermaier (Austrian media-artist, director, choreographer and composer) and Ars Electronica Futurelab. In this minimalist dance and interactive media performance the authors suggest that “there is no assumed hierarchy of systems” and that the choices made aim at amplifying the connection between physical and virtual elements.
The result is described as being an “immersive kinetic space / a virtual architecture that can be simultaneously fluid and rigid, that can expand and contract, ripple, bend and distort in response to or an influence upon the movement of the performers” which can be clearly illustrated by the following video sample:

Does physical matter still control the technology? Is physical movement becoming a mere reflex of the digital input? What happens when virtual and physical are blended to such a core level that they simultaneously occupy the same material space and are forced to interact?

According to the creators of the project, the intention was to produce “a kinetic space where the beauty and dynamics of the human body and its movement quality are extended and transferred into the virtual world”.

It is equally fascinating to zoom in to the creational aspect of some of these pieces to reveal their complex layered infrastructure. One perfect illustration of such “entanglement” is the project Synchronous Objects materializing William Forsythe’s choreography for “One Flat Thing, reproduced” (2000) and analyzed in more detail by Susana Zaragoza in her 2010 blog post on Data Choreography.
This initiative of The Ohio State University’s Advanced Computing Center for the Arts and Design (ACCAD) managed to assemble an international multidisplinary team including designers, dancers and scientists to explore the connection between dance, data and objects.

The performance, when visualized online, can be structured in so many different dimensions (by selecting certain video, audio and overlay settings) that it is difficult to initially understand if there is one particular leading layer or if there is just an organic symbiosis behind the apparent chaos. I draw a parallel between the multitude of alternatives and settings and the apparent superabundance of information currently available to all of us: it is up to the individual to select one leading cue and from that point create a narrative about the surrounding context (but also about himself) which allows sensemaking out of a labyrinthine reality.

In these hybrid performances, the end result is certainly different from the sum of the individual parts and what would be commonly considered surreal scenery now gains physical form.

Another, perhaps more far-fetched, example which defies any categorization and stretches further the boundaries of several disciplines is this “unnamed soundsculpture” (2012) by Onformative (a studio for generative design in Berlin comprising of Julia Laub and Cedric Kiefer) conceived in cooperation with Daniel Franke and Laura Keil.

In these pieces there is a seamless real time transition (if, in fact, there is indeed one) between the digital and the human as both elements continuously feed each other in one single three dimensional space.

Such imagery casts doubt upon the natural logic of causality: what comes first – the digital or the physical identity? As the authors of the previous project add: “A digital body, consisting of 22.000 points, thus seems so real that it comes to life again.”

Ultimately, if we would obliterate our physical identity and try to reconstruct it by assembling its digital fragments, would this attempt be completely successful? Would our reconstructed identity be the same?

The ultimate goal of this post, as you might have realized by now, is not to provide a definite answer to these queries surrounding the boundaries of a physical vs. a digital identity or the interconnections between virtual and material spaces.

Instead, the objective is solely to visually illustrate this challenging and interesting dialectic by highlighting examples of how a hybrid form of contemporary dance, developed by cross-disciplinary teams, can metaphorically formulate some of these conceptual questions. The end result is so hypnotizing that, even if we knew some of the answers, we would probably momentarily hold back our observations just to be able to watch all the questions being digitally danced again.

If the examples provided above stimulated your curiosity, here are some other projects also worth checking:

And also some blogs which can be relevant sources of information in this area: