WikiLeaks or We Keep Leaks?

On the 17th of June in 1972, 5 men got caught while attempting to infiltrate the democratic headquarters located at the Watergate hotel in Washington. Their objective was the placement of electronic listening devices to monitor the meeting hosted by the democrats. This operation was conducted by Richard Nixon, the former president of the United States, and would ensure he gained the advantage to become re-elected. The reason of failure? Deep Throat.

Thanks to an anonymous tip by a person hiding under the nickname “Deep Throat” (later exposed as Mark Felt, working at the FBI), this criminal operation has been prevented and condemned one of the most powerful persons in the world, the president of the United States. Leaking information, despite the consequences, already showed its worldwide impact and importance.

Since then, 30 years have passed when the year 2006 marked the beginning of a new organization called WikiLeaks. The goal of this organization was the intentional leaking and distribution of confidential information to the public, despite the possible consequences it could have.

Throughout the years, WikiLeaks saw an increase in media attention as its leaked information exposed more corruption and faults within our governments. The real breakthrough arose in April 2010 when WikiLeaks released shocking footage material of a US army helicopter firing innocent people in Baghdad, also known as Collateral Murder (Warning: the video below can be horrifying and violent to some people, so please watch at your own risk!).

In fear for an even more dangerous influence and flow of criticism, the US government decided to interfere and arrested the owner of WikiLeaks, Julian Assange, in December 2010. His arrest and the financial banking blockade against WikiLeaks slowly led to the downfall of the organization.

ZOOMING IN ON WIKILEAKS

Despite its downfall, it’s hard to deny that WikiLeaks influenced our world. After all, it did humiliate our governments and damaged the integrity of our world leaders. Yet it’s not so much the size of its influence, but the structure of WikiLeaks itself that’s worth taking a closer look at. 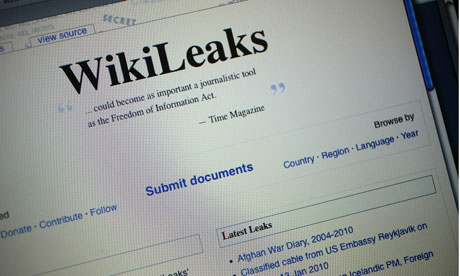 Operating through the use of a worldwide distribution channel, WikiLeaks is constantly receiving new material and decides which bits of information are suited for public release. This controlled selection process shows quite a resemblance with the tasks of a gatekeeper, a character that’s naturally connected to journalism. In the field of journalism, it’s the journalists who act as gatekeepers and decide which information can be released to the public. This structure barely allows the common people to have any form of influence in the release of information.

Yet WikiLeaks denies its resemblance with a gatekeeper and claims it’s purely aiming for total transparency through the use of investigative journalism. But is this really the case?

The term Gatekeeper was originally created in 1947 by the German psychologist Kurt Zadek Lewin. Creating a model to describe the process of journalism, he used the term to label the journalists who control the flow of released information. With this control, the gatekeeper has a strong influence on public knowledge by allowing and disallowing different types of information. Lewin died in 1947 to a heart attack, right before the release of his first gatekeeping theory and was therefore unable to improve it. Over the following years his theory received adjustments and brought forth new gatekeeping models, with one of the most influential ones by Bruce Westley and Malcolm Maclean in 1957.

With their model, they were the first to explain how the gatekeeper functions as a bridge between the public and the different events taking place in the world. More importantly the public was no longer simply passive, but was able to return feedback to the gatekeeper to improve the selection process.

A CHANGE IN STRUCTURE

To determine whether or not WikiLeaks is showing resemblance with a gatekeeper, I will position WikiLeaks within the model earlier mentioned from Westley and MacLean. This brings forth the following change:

The existence of WikiLeaks brought forth a major change in the traditional gatekeeping model: the new process of gatekeeping now consists of 2 sources of information. Not only do we have a anonymous source supplying WikiLeaks of new information (A1), but now there’s also WikiLeaks itself (A2) who decides what happens with this information. Equally leveled with WikiLeaks is Julian Assange (C1) who contains a big influence in the final publication of the material. Then there are the news agencies (C2) and journalists (B1) who receive this information and eventually release it to the public (B2). This would imply that we’re now dealing with 2 gatekeepers: WikiLeaks and the journalists.

It seems that WikiLeaks broke down the original structure of gatekeeping and brought forth an identity change. Journalists are no longer labeled as the only controlling gatekeepers, instead WikiLeaks changed journalists into guests with early VIP access to information (Berg & Klopp 2011). Julian Assange appears to acknowledge this change with one of his statements:

“The source is no longer dependent on finding a journalist who may or may not do something good with his document”.

More importantly, WikiLeaks is showing more signs of being a gatekeeper thanks to a written agreement with The Guardian, a British news organization which cooperated with WikiLeaks in the release of information. This agreement clearly states that the material WikiLeaks provides “is for review only, and is not to be published without the express consent of Julian Assange or his authorized representative”. WikiLeaks no longer simply supplies information, but also controls the flow of this information; just like the former gatekeeper.

This type of gatekeeping WikiLeaks is showing can be considered as Network Gatekeeping, a term originally created by the female professor Karine Barzilai-Nahon who attempted to link the change in gatekeeping with the rise of new technology. The internet and its networks create new opportunities to control the flow of information and makes the network gatekeeper:

“an entity (people, organizations, or governments) that has the discretion to exercise gatekeeping through a gatekeeping mechanism in networks and can choose the extent to which to exercise it contingent upon the gated standing.”

With WikiLeaks receiving new information through its digital network and controlling what gets released to the public, I can see the similarity with a network gatekeeper.

Now what’s striking is that WikiLeaks claims its only aim is total transparency within our world, even though they are able to keep information behind closed doors. This makes a description of the WikiLeaks phenomenon rather complex: its structure is open for the submission of new information, yet closed for editing and publishing purposes. Assange himself confirms he is aware of this paradox, in fact mentions his gatekeeper identity was an intentional move:

“We published this stuff and nobody noticed, [..] we realized that our goal was to put information out there that would have an impact. [..] The way we had to do that was to make information scarce rather than everywhere, that that would paradoxically get us more attention.”

He realized the scarcity of information is what drove the desired media attention and ensured his database of information remained hidden to the world.

Reading this statement does make me wonder if WikiLeaks is aware of their own contradictive goal. Because how can WikiLeaks continue to strive for total transparency and openness when they themselves simply refuse to be?

Barzilai-Nahon, Karine. Toward a Theory of Network Gatekeeping: A Framework for Exploring Information Control. Journal of the American Society for Information Science and Technology 59.9 (2008): 1493-512. Print.

Chen, Nadeemy. Wikileaks and Its Spinoffs: New Models of Journalism or the New Media Gatekeepers? Journal of Digital Research. 2011. Print.