Molecule F – A Story of Online Success in Romanian Fashion 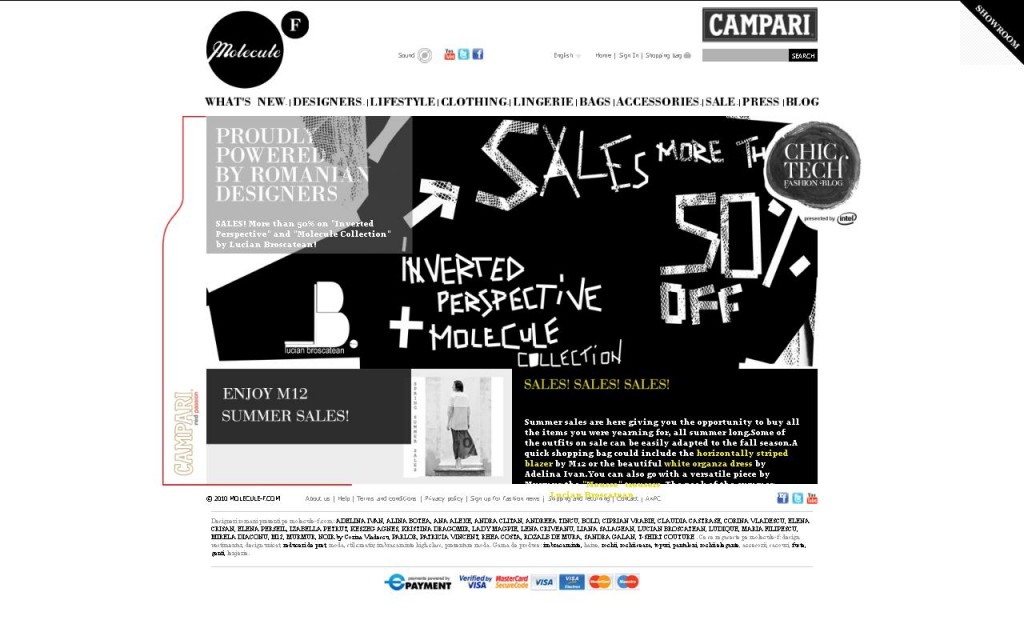 From an Idea to a Successful Online Project

Mirela Bucovicean, business woman and fashion addict, started this business two and a half years ago, by combining her two passions. The idea was to gather the visions of the best Romanian designers in only one place, even if they were consecrated or just debutantes,  all united by the sense of quality, in order to create a platform for promoting and selling fashion.

At that time, it was almost impossible for a customer to find, try or buy clothes and accessories from Romanian designers. There were a couple of boutiques and concept stores in Bucharest, but they were promoting just a few designers and, of course, only small parts of their collections. So Molecule F was created as a natural response to this new emerging demand for Romanian fashion design.

Why go online and not start a “real” shop? “The Online has the advantage of being available to a customer anytime, 24 hours a day, anywhere; you can think each acquisition very well, there is not “impulse” buying, and it gives the client the opportunity of returning the product within 10 business days (by the Romanian laws). Moreover,  e-commerce saves a lot of time and in a society in which time is of the essence, online shopping is the best solution” (Mirela Bucovicean). 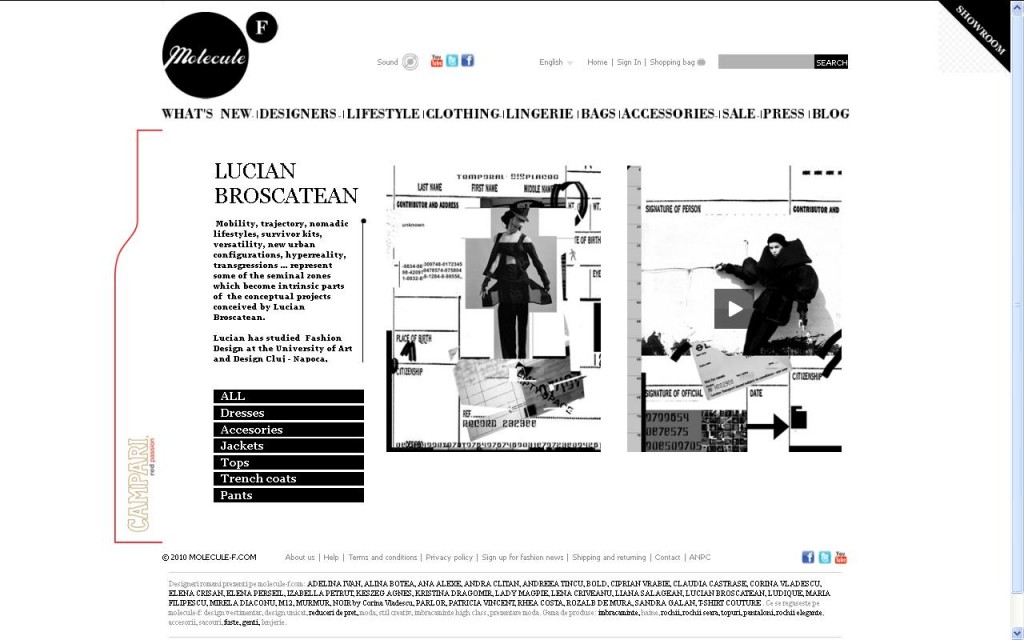 Before starting this business, Mirela gained a strong background in PR, media, advertising, marketing, sales, business management and for almost 10 years, she ran a fashion workshop. The latter helped her to better understand every single detail and segment of this business.

All of Mirela’s previous experiences conducted to what Molecule F is today and helped her start this business with the right people: designers, stylists, IT specialists. The layout was designed by one of Mirela’s former colleagues, from Saatchi & Saatchi, the programming was made by a web company that she had previously worked with and for PR she collaborated with Noemi Revnic, a specialist also from Saatchi & Saatchi.

As soon as the administrative part was set up, began the “hunt” for the best designers willing to join the offspring online store. Not even an year later, some of the best Romanian designers were selling their collections through Molecule F – which became a capsule of concentrated Romanian fashion. At the two year mark, the list added even more designers names. Some of them are creating capsule-collections especially for Molecule-F website. Others can be bought online exclusively from here. The project became not only the most well known online fashion store in Romania, but also a trendsetter and a new media success story.

To understand better what Molecule F really is, think of the famous Net-a-Porter.com online fashion store. It is the same kind of digital business, a very similar concept, but there are important differences between the two. Net-a-Porter.com sales well known brands from all over the world, on a market already developed by serious investments in marketing and advertising, whereas Molecule F sells only Romanian fashion design, which was not very well promoted in a commercial environment and had weak PR. Therefore, Molecule F became not only a platform for commercializing local designers, but also a powerful tool for promoting them. Moreover, Molecule F has initiated a “life style” section on the website expanding its content from fashion design to Romanian values in general. 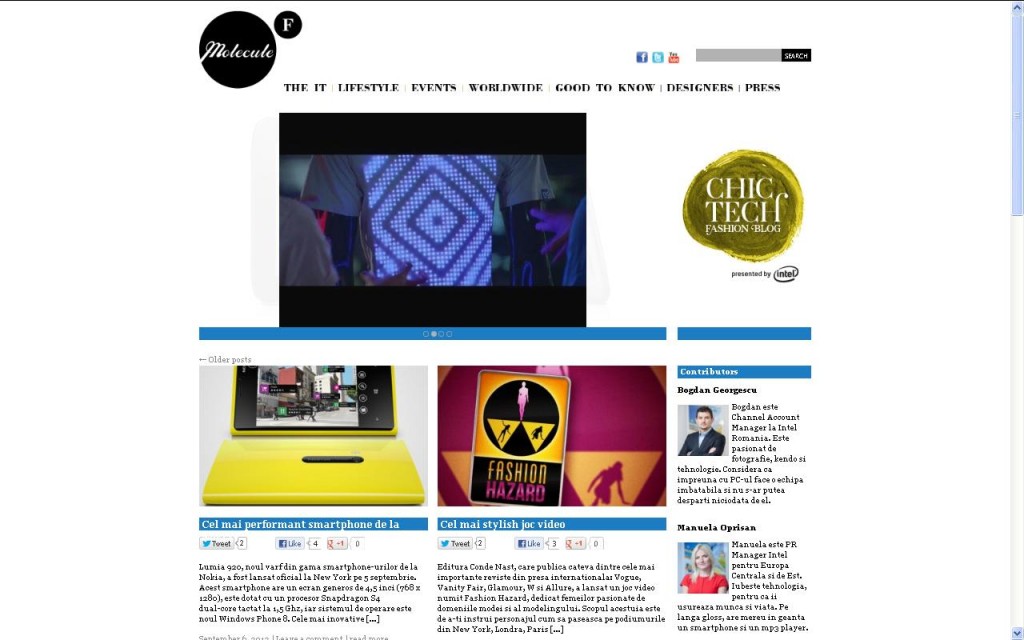 Molecule-F Blog and the Blogosphere

Because Molecule-F has evolved from just an e-commerce site and became an online platform for promoting designers, it gained another important section: the blog. The Molecule-F blog (only in Romanian) was created in order to maintain a natural dialogue with the website’s visitors. Because it is built on quality writing and information, the blog was soon on the press list of the most important brands in Romania. The team is made up not only by Molecule-F team’s members, but also by contributors (guest editors). “We’ve tried to bring together people with various fields of interest and different takes on fashion. We always have a new guest editor joining the team. It’s not that we look for them, it’s just that our passions cross paths at one point”, says Mirela.

Another crucial point for Molecule F was the collaboration with the Romanian fashion blogging community. It all started at Molecule F’s 1 year anniversary party, in 2011. Is was a thematic party – “let’s blog” – and it was streamed online on 5 different very visited blogs in Romania, and also at the location, each blogger having his own LCD where you could read the live posts. After this party, Ana, from www.highstreetcardigans.com, came with the idea of a special project developed together with Molecule F. The idea didn’t become reallity, but together with Molecule F’s team, another project was born: Morodanday, which started online one week later. 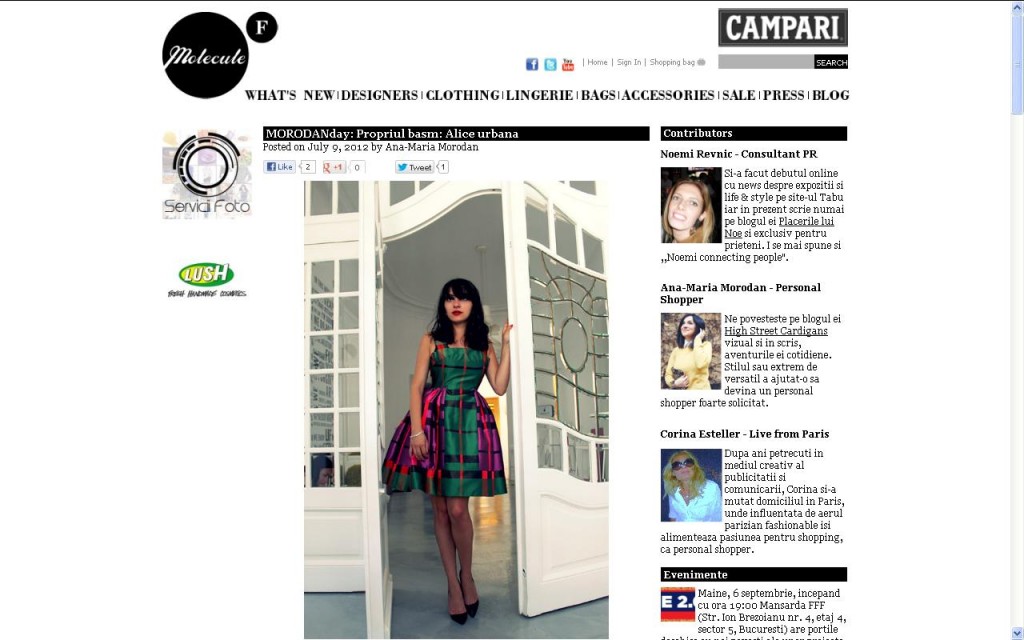 When Molecule F was created, the only promoting possibility for Romanian designer was a local event called “Iasi Fashion Week”, plus Idelier, a concept store in Bucharest. An year later, Molecule F  was already facing online competition, three or four different websites trying to use a similar platform for the same purpose. Still, Molecule F remains the leader in its segment, becoming a true story of online success. As Mirela says: “Sky is the limit! Molecule F is designed for an upwards development, we’ve always thought of it as a platform and not a mere online shop for clothing and accessories. It stands as a “reason why” for any creative initiatives, for socializing, for the appreciation of Romanian values, culture and beauty. After all, this is a versatile business that allows development where the market needs it.”