Before closing its doors for good at the end of this year, the Netherlands Media Art Institute dedicates an exhibition to one of the key terms in online culture: openness.

Getting lost is one of the annoying, yet inevitable inconveniences of being new to a city. In some cases however, it can be beneficial. A few days ago, I happened to stop at Keizersgracht 264, to park my bike to consult the map for a minute. Instead, I found myself right in front of what appears to be the most welcoming address in Amsterdam.

About a dozen LED signs saying “Open” in various colours and languages are put up next to the door of No 264. The flashing installation not only marks the entrance of the Netherlands Institute of Media Art (NIMk), but also gives an unambiguous hint to the central theme of the institute’s current exhibition: openness.

The title “Yes, we are open” however has a twofold meaning and bears an ironical reference to the gloomy future of the NIMk: Earlier this year, the institute issued a press release stating that it would have to discontinue its activities after 25 years on 31 December 2012, as a result of being cut off public funding.

“Who owns culture and who has access to it?” and “What can a term like openness mean in art today, and in internet society?” the exhibition guide asks, and the projects presented in “Yes, we are open” might not be answers, but certainly critical reflections about these questions.

Opera Calling for example, a 2007 artistic intervention by !Mediengruppe Bitnik: By hiding audio bugs inside the Zurich opera house, the artists were able to capture the live performance and to transmit it to the residents of Zurich via randomly selected phone connections. In one of the NIMk’s project spaces, visitors can eavesdrop a recording of such a transmission, in which the astonished recipients listen to the performance in amazement. 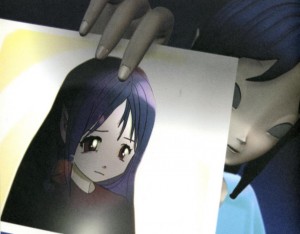 Or No Ghost Just A Shell, a project by Pierre Huyghe and Philippe Parreno: In 1999, Huyghe and Parreno acquired a fictional character from K-Works, a Japanese company developing Manga figures, in an attempt to unchain her from copyright restrictions. Annlee was given a story and an identity, and other artists were invited to incorporate the character into their own projects – free of charge. 18 artists produced 28 works, before Huyge and Parreno chose to return the copyright to Annlee in 2002, thereby actually killing her as a character. One decade later, NIMk brings up the question if artificial characters can simply disappear, and asks visitors to upload their reaction to the project to a blog.

Due to the digital character of most of the exhibits, “Yes, we are open!” is not a very tactile exhibition – most of the project spaces are equipped with little more than a screen playing a video loop. But thanks to the diverse range of projects and ideas showcased, the exhibition offers a fresh view on the ongoing discussion revolving around copyright, intellectual property and cultural freedom.

With an ever-expanding netizen culture that has adopted the freedom of the web as its core value on the one side, and the understandable commercial interests of the content industry on the other, simple solutions naturally can’t be found. But the exhibition does set its visitors thinking that there might be more to the cultural ownership debate than two diametrically opposed interests.

Already in 2004, Creative Commons founder Lawrence Lessig brought up his idea of a free culture in his book with the same title.

“A free culture supports and protects creators and innovators. It does this directly by granting intellectual property rights. But it does so indirectly by limiting the reach of those rights, to guarantee that follow-on creators and innovators remain as free as possible from the control of the past. A free culture is not a culture without property, just as a free market is not a market in which everything is free.”

Lessig’s understanding of a free culture is more than a simple claim for unlimited access to cultural contents; it also bears a democratic dimension of openness and transparency. Against this backdrop it becomes clear why “Yes, we are open” also highlights projects of purely political nature – such as Nulpunt, a freedom-of-information website in the making.

Currently, the Dutch government is working on an updated Freedom of Information Act, which should guarantee that all public documents will be automatically made available and collected in an electronic record in the future. In this context, Nulpunt aims to become a user-friendly tool for searching, highlighting, commenting and sharing these documents through a variety of social networks.

If Nulpunt was already up and running, we perhaps could find a document explaining why funding for the NIMk was ceased. It is unlikely that the institute will live to see the launch of its latest exhibit. But at least, “Yes, we are open” will remain open for a few more weeks: weekdays from 9-17h, until the end.