Helping Neighborhoods Get Social Again. Or not?

Every good idea is a solution to a problem. In the case of San Francisco based start-up Nextdoor the problem is that neighbors no longer get to know each other and truly communicate. The small-scale social network is trying to solve this by introducing a digital medium for neighbors to exchange messages, ask for help or organize local events. Every neighborhood, suburbia or small town has its own page, and all visible content is generated by people who actually live there. This is ensured by a secure registration and verification procedure based on the user’s physical address. Once people register in their neighborhood, they can send messages, write posts or questions, but they also have access to all previously shared information, meaning that answers can be found even without asking.

Setting up a neighborhood page is simple, but requires at least 10 people to join in with their addresses during the first two weeks after its inception. This is done to prevent the accumulation of “dead” or “inactive” pages with only a couple of users. The structure of the page itself is a perfect example how a social network doesn’t have to “borrow ideas” from the big players like Facebook, Twitter or Google, but instead use simple and genuinely innovative tools that only serve their audience and purpose. The service has no concept of “friendship” or “following” – each neighborhood page has its own “news feed” with members posts, an “events” section for local parties, as well as a dedicated space for user recommendations for services and venues.

According to Nextdoor’s founders and their “manifesto”, the web service is aimed at both connecting people online, and bringing them together in the real world. On the front page of the network there is a compilation of “success stories” of neighborhoods and towns that had a real-life benefit from using the service. Some tell of crime prevention and increased sense of security, others of successful fundraising events, but the recurring trend is of people enjoying a stronger sense of community.

In an interview for The Washington Post, founder Nirav Tolia explains that so far one of the most appreciated functions of the network is the “recommendations” one – where users can see what local services and businesses are popular in their neighborhoods and towns. He explains that once Nextdoor has perfected its user experience, the company can move to monetize its service and one of the initial ideas is to expand the “recommendations” tab and allow local businesses to market their services and products there. According to Tolia, this kind of advertisement will in fact be welcomed by the users, who already use the section extensively.

So far so good. At first sight this platform seems to be very positive in getting neighbors in contact with each other in a casual way, so they can get the sense of community back on- and offline. Not to say that this isn’t true or isn’t possible when using this platform, but when getting deeper in the material and media coverage, this doesn’t seem to be the main goal. What does seem to be the main goal is ensuring future revenues by monetizing the “recommendations” tab. Tolia even admits in an article in Wired that neighbors don’t necessarily want to get to know each other: “You’re not friends with your neighbors,” Tolia says. “You don’t want to be friends with your neighbors…” This suggests that it’s not focused on building strong and close communities, but more on loose ties that come in handy when facing practicalities. This isn’t necessarily a bad thing, because, like Tolia stated, users will welcome the commercial “recommendations” because it’s based on their local needs. But this seems quite different from what their manifesto suggests. These loose ties that are aimed to find solutions on neighborhood related problems and needs are fairly individualistic and they do not per se provide for a sense of a close friendly community. 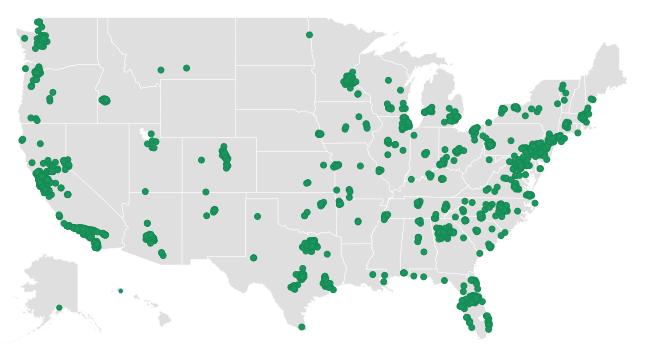 At this moment Nextdoor is slowly growing and covering the neighborhood communities of North America. North America is a large space to conquer, but the network is doing it very successfully. It therefore wouldn’t be a big surprise if the founders of Nextdoor decide to take it overseas and introduce it in other western societies like Europe or Canada. Currently though, their next step seems to be to focus on monetizing their platform before thinking of taking it overseas.