O’Reilly at PICNIC 2012: Give-and-Take on the Internet

Since its beginning the internet has been designed as a sharing platform for information exchange without the regular borders of time and space. Free from all the constraints of the offline world information could – with he help of digital technology – be reproduced almost without additional costs. This marked a milestone for both academics and science enabling unprecedented collaboration amongst academics and amongst scientists. The notion of “free” information sharing has always been part of the internet identity and therefore part of digital culture.

“From its earliest days, the free exchange of information has therefore been firmly embedded within the technologies and social mores of cyberspace” (Barbrook 1998)

The sharing culture of the web really took off at the beginning of the 21st century with sharing platforms freeing users of having to deal with computer code and creating graphical interfaces for these users enabling them to not only build a web presence without the knowledge of programming, but also allowing them to participate in cyberspace and build a community that is unlike any other.

This sharing culture is now under attack from various business actors because often times the concept of sharing information, which can often be intellectual property, flies against the principles of capitalism in the offline community.

“Within the developed world, most politicians and corporate leaders believe that the future of capitalism lies in the commodification of information. Over the last few decades, intellectual property rights have been steadily tightened through new national laws and international agreements.” (Barbrook 1998)

Barbrook however argued that the web has an economy of its own. In this “High Tech Gift Economy”, which is a dual economy, capitalism and anarcho-communism not only coexist alongside each other but they also interact and function in a form of symbiosis.

“Yet, on the other hand, the gift economy and the commercial sector can only expand through mutual collaboration within cyberspace. The free circulation of information between users relies upon the capitalist production of computers, software and telecommunications. The profits of commercial Net companies depend upon increasing numbers of people participating within the hi-tech gift economy.” (Barbrook 1998)

The idea behind sharing information according to Barbrook is that everyone gives less than they receive from the internet community because by giving information they are getting access to all the other information provided by the rest of the community.

“By adding their own presence, every user contributes to the collective knowledge accessible to those already online. In return, each individual has potential access to all the information made available by others within the Net. Everyone takes far more out of the Net than they can ever give away as an individual.” (Barbrook 1998) 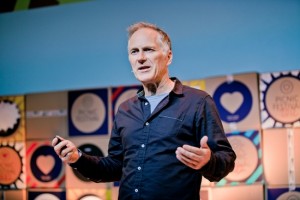 Tim O’Reilly picked up on this topic during the PICNIC 2012 talks by stating that companies need to acknowledge the necessity of the sharing culture for their own existence. He used Comcast and Bluehost as examples of businesses that are part of a billion dollar industry relying on information sharing. O’Reilly argued that by destroying or curtailing this sharing culture the companies are “eating their ecosystem”.

Instead O’Reilly showed how society and the world was being pushed forward by individuals, such as Tim Berners Lee, who gave much more to the system than they ever took out. On the other hand he showed how the global financial crisis was an example of business actors taking too much out of the system and giving back less thus causing the market to collapse.

O’Reilly then goes on to show parallels between web 2.0 and the financial markets. Firms are likely to turn against their customers in order to capture more value out of the system. This is becoming visible with companies like Google, who was initially designed to point exclusively to websites outside of Google but is now slowly starting to link to services within Google and thereby “eating its ecosystem”. He compares this to the early beginnings of Microsoft and the later development towards a system focused on capturing value out of the system. Tracing these thoughts back to Barbrook it can be said that in order for innovation and monetization to coexist and create an environment to foster development it is important to embrace both capitalism as a form of motivation and anarcho-communism as a form of simplification of information exchange. A balance between them has to be struck.

In addition O’Reilly also shows how innovation and monetization are like a sine and a cosine wave and continuously switch between the creation of new things and the monetization of these things on the market (often by different actors). The value that the innovators initially create for free is later on exploited by other innovators to create more value. This stands in contrast to the taking out of value from the system without giving anything back.

SHARING AS A KEY INGREDIENT IN A CAPITALIST WORLD

O’Reilly’s ideas can be traced back to Barbrook’s 1998 work on the High Tech Gift Economy, where sharing enables progress and allows for continuous innovation without the handicap of intellectual property or paid information, which excludes certain participants and therefore hinders information sharing and progress.

Both O’Reilly and Barbrook argue that sharing is the key ingredient to innovation in today’s world. What can be learned from O’Reilly and Barbrook then is the way sharing culture and capitalism should be perceived. These two are fully integrated and interdependent when it comes to the Internet. Apart from a moral obligation, firms that do business on the web need to acknowledge this in order to have success and to ultimately survive in the long run.

by Richard Zimmerman and Alain Otjens