School is Cool: iPad’s in classrooms

“It was absurd (…) that American classrooms were still based on teachers standing at a board and using textbooks. All books, learning materials, and assessments should be digital and interactive (…).” (Isaacson,2011, p. 264)

This is a quote from Steve Jobs, published in his biography written by Walter Isaacson. Internet, computers, iPad’s, and other ICT-products have set new possibilities for schools and their teachers. Several institutes and schools are struggling with these new opportunities and try to incorporate them in their curriculum. Tineke Bröcheler (32) is one of them. Since 2002, Tineke works as a history teacher at the Dutch high school St.-Jans College in Hoensbroek, The Netherlands, and in 2010 she became their ICT-coordinator. 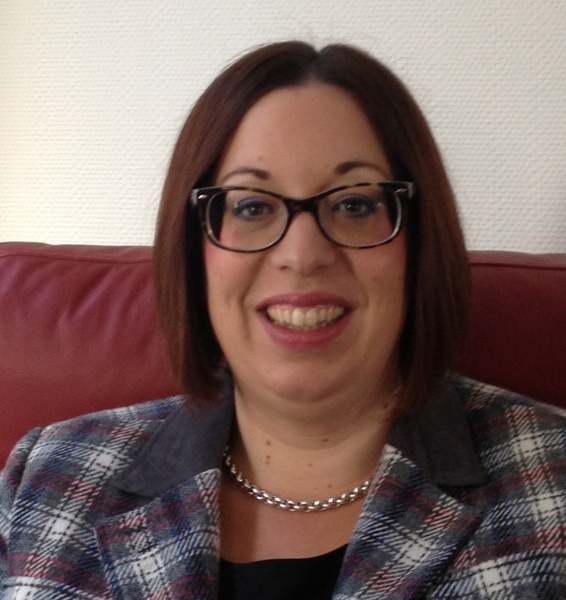 From this position Tineke Bröcheler introduced the idea of using iPad’s in the classroom. Last year, she started the pilot called ‘MetIpadoppad’, including twenty students. In about a couple of weeks the project will be expanded and two new classes will take part in the program. This expansion is important for Tineke. For the Master program of TIER, Top Institute for Evidence Based Education Research, in Maastricht, Tineke goes a step further than introducing the iPad. She wants to scientifically measure the effects and consequences of the use of iPad’s in the classroom. Although it would be interesting to come back to Tineke when she finished her project, this blog post is dedicated to her recent, empirical findings.

The Pilot
In 2010, right after she started as ICT-coordinator, Tineke Bröcheler wrote a policy plan in collaboration with the management of the school. One of the priorities was ‘mobile learning’. “Mobile learning means that students have more flexibility. They can study in different rooms, divide themselves in groups to search information, and the old-fashioned text- and exercise books are no longer required.” The pilot program Metipadoppad is part of ‘mobile learning’ and was introduced to twenty students last year. The students got their own iPad and the devices were used during the German and History lessons. 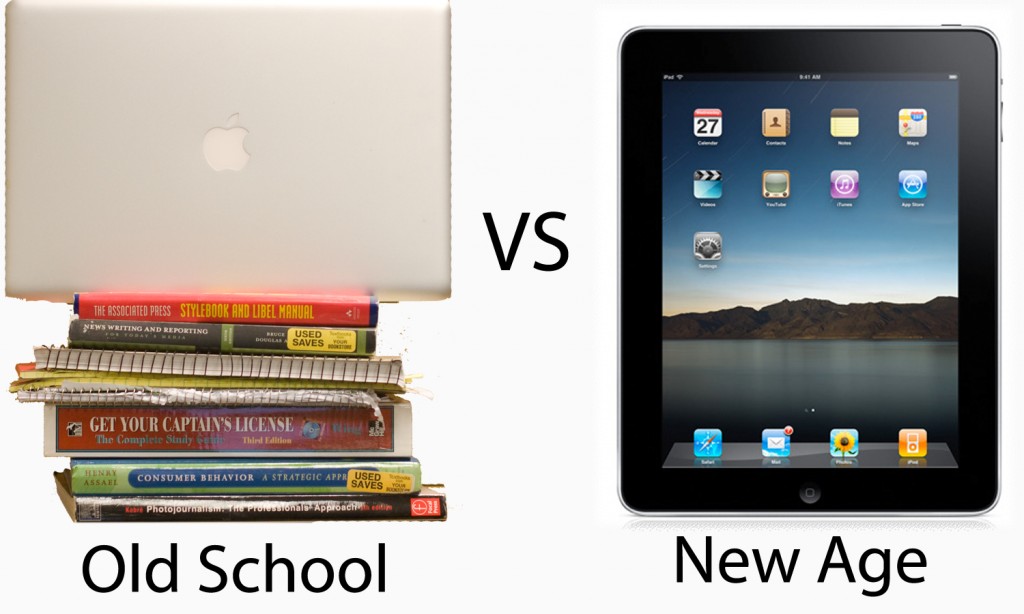 “The use of iPad’s for these subjects has several advantages. First of all, children have all their materials on their iPad, they can make notations on the iPad as well, and they no longer have to carry large and heavy bags.” But there is another advantage that highlights the aspects of ‘mobile learning’ and flexibility. “Ipad’s make practicing of speaking and listening skills for foreign languages much easier. Students are able to record and correct themselves. Besides they can send the recordings to their teacher who is able to watch and review the recordings after class which saves a lot of time.” According to Tineke this does not result in increased burdens for the teacher. “Teachers are more flexible and can give more specific attention to students and can respond to their personal level.”

Responsibility
The iPad project not only provides teachers new opportunities to teach their students. The project is a way to create awareness about the 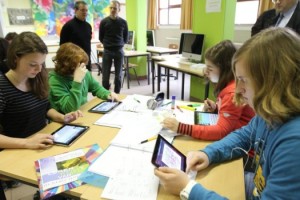 use of new media and teaches them to be responsible for the device. “Students are responsible to load the battery every day and to make sure the latest updates, like iOS6, are installed.We chose not to block the iPad. Students are free to put apps on it, and they are allowed to use the device at home in their free time.” An ‘open’ iPad contains some dangers. According to Tineke, dealing with these dangers is a way to make them responsible. “We made very clear agreements. If they use their iPad during class for example to watch their Facebook profile, they get an admonition.”

Numerous parents and researchers like Sherry Turkle, complain about the increasing amount of media exposure of children. Why would a school stimulate their students to use an iPad in their own time? Tineke is very clear about this: “We made good and clear agreements with the students and their parents. Some students are not able to use the devices after, for example, 10 am. On the other side, using the iPad in their free time stimulates children to explore the store, to contact each other and this motivation also reflects on their schoolwork. They downloaded Skype to chat, but now they also use it to help each other with their homework.”

Non-generativity
In his book The future of the internet and how to stop it (2010), the American scholar in Computer Sciences and Internet Law, Jonathan Zittrain, argued that non-generative systems like Apple’s iPhone’s and iPad’s are threatening the future of the internet and even our democracy (Zittrain, 2010). With non-generative systems, Zittrain points at closed systems that are easy to use, but don’t allow you to edit the code of the systems. Zittrain also point at the App Store which is highly regulated by Apple. The company decides whether apps pass the gate or not (Zittrain, 2010, p. 103).

For Tineke Bröcheler, this non-generativity was not a problem at all. On the contrary, it was one of the reasons to purchase Apple products. “The iPad is a very closed system. Students can only install software from the App Store. This protects them from viruses, malware and even explicit material. Because we did not want to block the iPad, the non-generativity of the iPad is a way to be sure that the iPad is a safe environment. They cannot do very much wrong. Besides the App Store, in comparison with for example Google Play, still contains the most and best educational apps.”

Setting a standard
With two extra classes starting in a couple of weeks and some new teachers taking part, the project will reach another level. How is the support of other teachers and are teachers who do not take part in the project free to incorporate the iPad in their lessons? “We are not trying to set a certain standard. Teachers are free to exploit the possibilities and to decide whether or not students can use their iPad for making notations, for instance. We try to preserve the personal style of the teachers. We only ask them to use the digital agenda to avoid that students have two agendas with different content.

To measure is to know?
The experience with the first twenty students of last year created, as Tineke calls it, “gut feelings” that the project has positive effects. To measure is to know and that is exactly what Tineke is planning to do. “Students get taught the same curriculum as the students who do not use an Ipad and they make the same tests without the use of an Ipad. I want to compare their results and scientifically measure the effect of the iPad in the classroom. This is the reason why I started the master program TIER and I hope that my research will give some interesting insights in the effects of using iPad’s.”
We will wait patiently on the results and maybe present them in a next blog post! Keep you posted!
For more info go to:
Metipadoppad
MetJantjeopPad