When the audience becomes the hero…

Annette Mees on theater and transmedia

Annette Mees is director and co-artistic director of Coney in England. By using various media she creates special plays in which the audience is the hero: “The experience starts when you first hear about it and only ends when you stop thinking and talking about it.”

You Have Found Coney 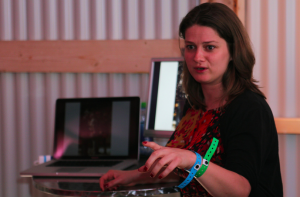 Annette Mees has always been working in a very interdisciplinary way. After she studied video design at the KABK in The Hague and made several short films and curated exhibitions, she moved to England where she discovered the possibilities of theater and digital media.

“Making theater is an organic process. The way we work reminded me of the hacking scene that I knew from Amsterdam. During my courses in directing theater in London, I started to combine ways of storytelling in theater and film. I experimented with writing scripts and I learned the art of storytelling.

Meanwhile I started to ‘hack’ the methods of conventional theater and instead of doing the assignments, I started to work on my own projects. I implemented interactive elements in my plays that I found interesting.”

Together with Tassos Stevens and Tom Bowtell, Annette Mees leads Coney. They design live performances, digital experiences and  storyworlds in which the audience can actively participate.

“This year we completed House of Cards, a major project for Kensington Palace. A very different ongoing project is A Cat Escapes, an educational adventure involving school children help a cat to escape. In theory, Coney can be everyone. There are a number of principles that we work with. You can find them on our website. In fact Coney itself is a storyworld. ”

Technology as a tool for storytelling 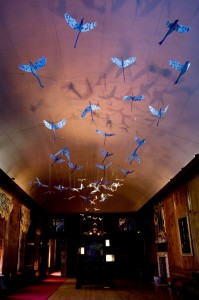 Annette Mees uses digital media as tools for telling stories. According to Annette,  using digital media is interesting for creators because of two reasons.

“With technology, you can do magic. Sophisticated tools can help you to create experiences that are simply magical. For my performances I rather use technology in a different way, namely as a means of communication. By using media that the audience is familiar with and that are already part of their daily lives – like text messages or YouTube video’s – stories can infiltrate into the lives of the participants.

Next to an e-mail from a colleague or your aunt, you’ll find an email from Coney in the same inbox. In that way, the story goes beyond the time-span and the location of a performance. The experience starts when you first hear about it and only ends when you stop thinking and talking about it.

The performances that I make are distributed through various channels and mediaplatforms. In that sense you could say that I’m a transmedia producer. At the same time, the concept of transmedia is mainly used by filmmakers and advertisers.

If the audience becomes the hero of a story

“One of the principles of our shows is that the audience itself becomes the  hero of the story. The storyworld that we create as a framework for the show, is written for the audience. Subsequently the show transforms because of the participating audience and adepts to them.

It makes a real difference whether you participate, or someone else. There is a lot of experimenting going on with interactive performances where the audience can participate in a story, but in these pieces, it often does not matter who participates. The journey remains the same for each player. It has a plot that will always be told in the same way.

At Coney we try to examine what it means that a work is actually about you. What is the effect of a piece that responds to you, and that your actions have real consequences? Just like real stories, the choices of a character have dramatic consequences.

By using text messages, phone calls and emails, we can have a direct dialogue with the audience. Oftenly we ask the audience to answer some questions in advance, so it becomes a personal experience from the start.  Everyone is an author of the adventure. ” 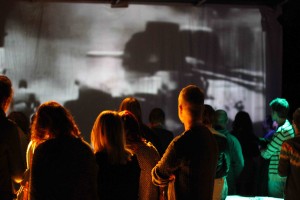 Because of social networks and other online platforms, it has become natural to share our daily stories with acquaintances and strangers. Online, people play a certain role.

“Precisely because of these developments, the current audience is so interesting to work with. Participants are usually very enthusiastic and creative. Both online and offline there is a lot of co-creation going on. This way of working should be more oftenly implemented in the art and theater world.

Many creators still work according to an an old-fashioned broadcasting system: you go to the theater, the story is told, you leave the room and you  may talk a little bit about it afterwards in a café. This is not how people work anymore. It is much more challenging to implement systems as co-authorship and co-creation in a meaningful way.

Initially it is a little bit scary to let the story be controlled by the audience. Ultimately, this is precisely what a show makes so interesting. It is wonderful to see how an audience responds to the different elements of a performance. ”

Games as a research tool 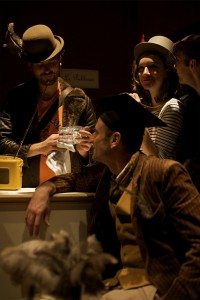 A Small Town Anywhere in BAC in Londen (Briony Campbell)

“Storytellers can learn a lot of games. In the field of game theory, there is a lot of knowledge about how to activate an audience, and how you make sure that people are free to act within a demarcated space.

Games consist mainly of determining structures. These structures prove to be very useful when you want to investigate other existing structures. Game mechanisms and roles can be translated into social and political structures, or social contracts. When do you become an ‘us’ with me? Who are ‘they’? And when do I isolate myself from a group? We use these game elements in our performances.

How do you document an experience?

“It is quite difficult to document our work. The experiences consists of three layers: the artificial storyworld that Coney creates, the ‘real’ world and the imagination of the audience.

In the past years, Coney has developed many projects with partners such as the BBC, Tate Britain and the National Theatre. We have just become a non profit organization, so we get subsidy and we are part of the national portfolio. Now we have more space and time for research and reflection.

In the future we want do more collaborations and explore new technologies. Open source software and commons are very much in line with what we do. It is very interesting and inspiring to work with people who are experts in their own field. You can alter a discipline by implementing elements of other disciplines. Jazz musicians who improvise are using structures that may be of interest to us. In that way, our storyworlds become richer.”

Take a look at the projects of Coney at www.youhavefoundconey.net