Warning! Your message may turn against you!

Last week witnessed a turmoil on the Romanian online media regarding an advertising campaign.

The latter belongs to pharmaceutical company Secom Romania and introduces Neuro Optimzer, a treatment based on pills that improves certain brain functions for autism, ADHD, Alzheimer pacients but also individuals confronting stress and anxiety. The campaign was releases on the site uraste.ro (“hate.ro”) and featured 3 spots  entitled “Hate your child, hate his autism”, “Hate your father, hate his Alzheimer” and “Hate yourself, hate your exhaustion”. These featured people revealing a sincere confession about how handling with these diseases caused them to feel frustration and hate towards their situation despite their unconditional love to their ill loved ones. 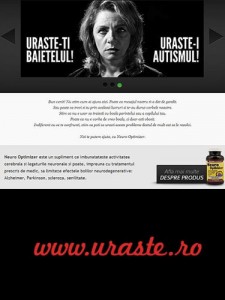 Step 1 of the campaign: shaking a tabu.

The campaign received negative feedback from their buyers, NGOs, media experts and users. At the end of the week, they released their expected 2nd step of the campaign by changing the site to iubeste-i.ro(“lovethem.ro”) and revealing it was in fact an awareness, donation campaign. This didn’t bring much sympathy back and they have been reported for prosecution.

What’s worth looking into here?

It is not the first time on the Romanian market when a products is advertised on a 2-step campaign: the revolting 1st  part and the revealing of a second. It proved efficiently before; yet this is not the case with Uraste.ro and Secom. The online media reaction determined its failure.

With the clearly negative input the campaign received, I asked “why?” was it rejected by what I consider its 3 main targets: products buyers, the larger audience  and (online) media specialists.

How do these 3 targets react to what was clearly an emotion-appeal type of campaign? What specific arguments does each target point out in rejecting it?

I took the available number of 33 blogs that covered the issue in the week of 8th – 12th of October, when the campaign reached high peak and then changed the site. I consider these relevant platforms because it is here I could find the fully fledged discourses of media experts, the general audience and the directly implicated people. The method used was content analysis, during which I looked at the recurrent arguments bloggers raise to either reject and (rarely) support the campaign. I also looked at the tone of the blog posts – are they objective or highly emotional?

There have been 9 blogs pertaining to media savvy bloggers. Not coincidentally, these blogs hold top positions in the blogosphere according zelist. They are online editors, presenters, advertisers. Two of them wrote 3 blog posts on the campaign unfolding, and one kept 2 accounts (before and after the revealing).

13 out of 14 have a mix of rational and emotional approach, 1 is objective.

Only two bloggers suggested that the audience was not ready to receive such a campaign due to its moralistic prejudice.

Actions: 1 reported the page, 2 wish to stop campaign, 2 ask for official apologies, 1 asks for a pro bono campaign from Secom, and there is 1 encouragement not to donate.

There were 20 reactions from the larger blogging community. 8 have an entirely emotional approach while the rest of 12 keep it a mix.

Actions: 4 wish to stop the campaign, 3 encourage readers not to buy products, 1 asks for apologies, 1 would like to see the company fined, 1 suggests a report for prosecution.

There have only been 4 blogs as a direct response from people actually having personal experience with ill family and friends. Only one had an objective perspective while the other 3 had pure emotional approaches.

Actions: 2 discourage buying the product, one suggests reporting the company.

All in all, results point out to several important aspects where the campaign failed to convince the audience.

One of them is the products lacking research and presented ambiguously as a treatment for both incurable disease as well as anxiety. This really hints at an execution issue in the campaign, namely positioning the product. It also shows that people are paying a lot of attention to rational arguments, whereas this campaign was very emotional. 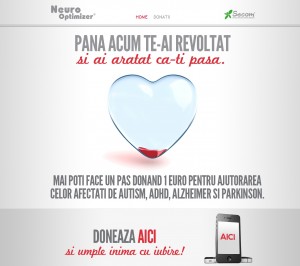 Step 2 of the campaign: revealing.

Another aspect is the revealing of the 2nd campaign part, which was perceived as bad management of crisis. Here I see a targeting problem as well: the hate campaign seems to address the actual buyers of the products, but with the donation it suddenly addressed everyone. Was this planned or just a 180 degree, forced turnaround?

Hate however, remains the central issue. Hate is psychological, hate is socially embedded, hate is deeply prejudiced, hate is shameful. It is a bold move to propose such an uncomfortable campaign and it could be said it had good intentions of breaking the tabu. However, it seemed they relied a little too much on the emotional, whereas the emotional appeal here is so personal that it can easily become offending. They also relied a little bit too much on people’s patience to wait for the revealing of the campaign, whereas if they were offended from the beginning, they are unlikely to change their opinion. When you’re approaching issues so personal it perhaps to naive to think in the end people will say “well, that was intriguing but great!”. Not with this hard topic of ilness.

The list of blogs is on Connotea.org , each of them tagged respectively.