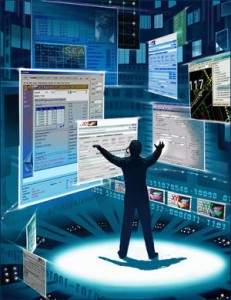 As a network, the Web is usually connoted as an open-ended, anarchic and non-hierarchic environment. Compared to previous modes of organization, its distributed nature is considered an improvement over centralized and decentralized one-to-many communications and productions. ((
Alexander R. Galloway, Protocol: How Control Exists After Decentralization, Cambridge, MA: MIT Press, 2004.)) However, with the increasing popularity of Facebook, a site that recently surpassed the bar of 1 billion users, the distributed network-structure is now under attack. I will argue that this particular social network is nowadays little more than an institution of power that exercises centralized command and control as was previously done in disciplinary societies described by Michel Foucault. In this brief historiographical case study I will explain how Facebook is exercising social power via digital technologies and how these new means of supervision are related to earlier techniques of panoptic control.

In Surveiller et punir: naissance de la prison Foucault determines that exercise of power in modern societies is characterized by means of individual differentiation and categorization. As a result of precautions for the plague, disciplinary facilities like schools, hospitals and prisons were brought into being. These institutions were meant to measure, control and improve the behavior people that did not act appropriately. ((Foucault, Michel. Discipline, Toezicht en Straf. De geboorte van de gevangenis. Vertaling van Surveiller et punir(1975). Groningen: Historische Uitgeverij, 2007: p. 270-313.))

Blueprint of the panopticon

According to Foucault, the “panopticon”, a circular prison designed by Jeremy Bentham in 1785, is metaphoric for the modern society and represents the ideal architectural embodiment of discipline. Via the look-out in the middle of the prison, every detainee could be observed without ever seeing one of the guards. His vision is limited because he is blinded by a light. The exercise of power is successful because of the fact that the prisoner constantly sees the silhouette of the central watchtower, while never knowing for certain if he is actually being watched. Because of the possibility of being watched at any time, he is forced to behave properly all the time. Hence Bentham’s assertion: “power should be visible yet unverifiable” (Foucault 1975: p. 7).

An inside view of a panopticon

In the panoptic system, the convict is the principle of his own subjection. The apparatus enhances its power by making itself faster, lighter and more efficient. Besides, the panopticon can make up individual profiles of persons by means of registration without them being able to influence one another. ((According to Foucault, the panoptic device would be ideal for testing children in school because they wouldn’t be able to cheat.)) Another salient characteristic of the panopticon is that it served as a natural experiment, as well as a laboratory to test medicine and execute pedagogical tests.

The above characteristics of the panopticon have a lot in common with contemporary social network sites. First of all they are being maintained by users, they differentiate and categorize people according to personal information, and moreover they form an experimental test-bed for producers. 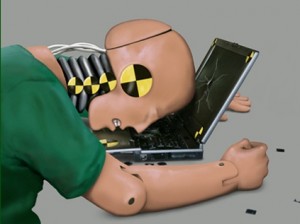 Are we just test subjects?

Nowadays the modern society has been substituted by a postmodern information society. The concept of the disciplinary society is no longer relevant. As a consequence of developments in computer technology, a large part of our communication takes place via digital networks and information is stored in virtual databanks. Contemporary means of surveillance are also rooted in digital information-networks. Gilles Deleuze describes this state of supervision as the “societies of control,” in which an individual is not as much constrained by physical barriers, but is controlled on the basis of his or her digital alter ego. Individuals are transformed into “dividuals”: data collecting individuals (Deleuze 1992: p. 5). ((Deleuze, Gilles. „ Postscript on the Societies of Control.‟ October, Vol. 59 (Winter 1992): 3-7.))

In this case, the panoptic gaze shifts  from the body to its digital double. “The concept of the “dividual” is fundamental here, in societies of control the individual is doubled as code, as information, or as simulation such that the reference of the panoptic gaze is no longer the body, but its double, and indeed this is no longer a matter of looking but rather one of data analysis”, according to Bart Simon (Simon, 2005: p.15). ((Simon, Bart. „ The Return of Panopticism: Supervision, Subjection and the New Surveillance.‟ Surveillance & Society, 3(1), 2005: p. 1-20. <http://www.surveillance-and-society.org/Articles3(1)/return.pdf>))

A specific example of a website that depends fully on the creativity and input of the user and stores personal ‘databody’ information and preferences is of course Facebook. The obtained data is used to compose consumer profiles. The information that Facebook gathers is instantly no more the possession of the users, and corporations can do with it whatever they want, according to the terms of use. In Facebook, personalization is key; “when users indicate preferences for certain content, it may lead sites to cast up “contextual” ads that reflect those interests or the lifestyles they imply” (Turow 2006: p. 97). ((Turow, Joseph. Niche Envy. Marketing Discrimination in the Digital Age. Cambridge, MA: MIT Press. 2006: p. 71-98.))

Nowadays it is generally known that Facebook gathers personal information and sells it to third parties. This is after all the practice that makes the network so lucrative. On the other hand, most users still don’t know that, besides the published info they put on the network itself, Facebook is allowed to assemble additional information about users coming from other sources:

Facebook may also collect information about you from other sources, such as newspapers, blogs, instant messaging services, and other users of the Facebook service through the operation of the service (e.g. photo tags) in order to provide you with more useful information and a more personalized experience. By using Facebook, you are consenting to have your personal data transferred to and processed in the United States. ((Facebook’s terms of use are findable on Facebook.com. Daily update: 08-10-2012 <http://www.facebook.com/terms.php>))

The terms of use from Facebook’s enrollment policy transform the social network into some sort of commercial panoptic laboratory, as described earlier by Foucault. Every random manifestation of privacy infringement is glossed by arguing that the collection of personal data is necessary to provide better services to users. Figure 1 shows a comparison of the main characteristics of both the panopticon and Facebook. 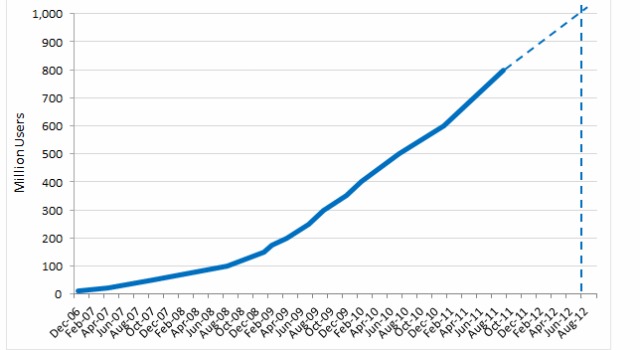 As more and more people confide themselves in Facebook as a gateway to the WWW, as a means of liking and – nowadays –‘wishing’ their favorite consumer products and, most importantly, as a tool to maintain personal relationships, its centralized scope of control grows. According to Geert Lovink “what we need to defend is the very principle of decentralized, distributed networks […] This principle is under attack by corporations such as Google and Facebook” (Lovink 2011: p. 31). ((Lovink, Geert. Networks Without a Cause: A Critique of Social Media. Cambridge: Polity Press, 2012.))

Although dataveillance differs from the panoptic concept through the intervention of technological devices and the shift from physical surveillance to abstracted data-analysis, it still resembles the centralized control of the former disciplinary society in some profound ways. For instance, in the contemporary societies of control – and in particular on Facebook – the users are the ones maintaining the system, just like the prisoners in the panopticon were the principle of their own subjection. The panoptic laboratory is also still present, despite the fact it is transformed into a commercial test bed for marketers. I would therefore argue that the disciplinary society has not come to a definite ending, and that panoptical surveillance has reached a new chapter that propels on the foundations laid down by Foucault. The panopticon merely adapted itself  to socio-economical and technical developments, continues through the ideology of the free market economy and capitalism, and can nowadays be interpreted as a ‘digital panopticon’ that is naturalized within the black boxes of Internet technology, with Facebook serving as its ultimate embodiment.